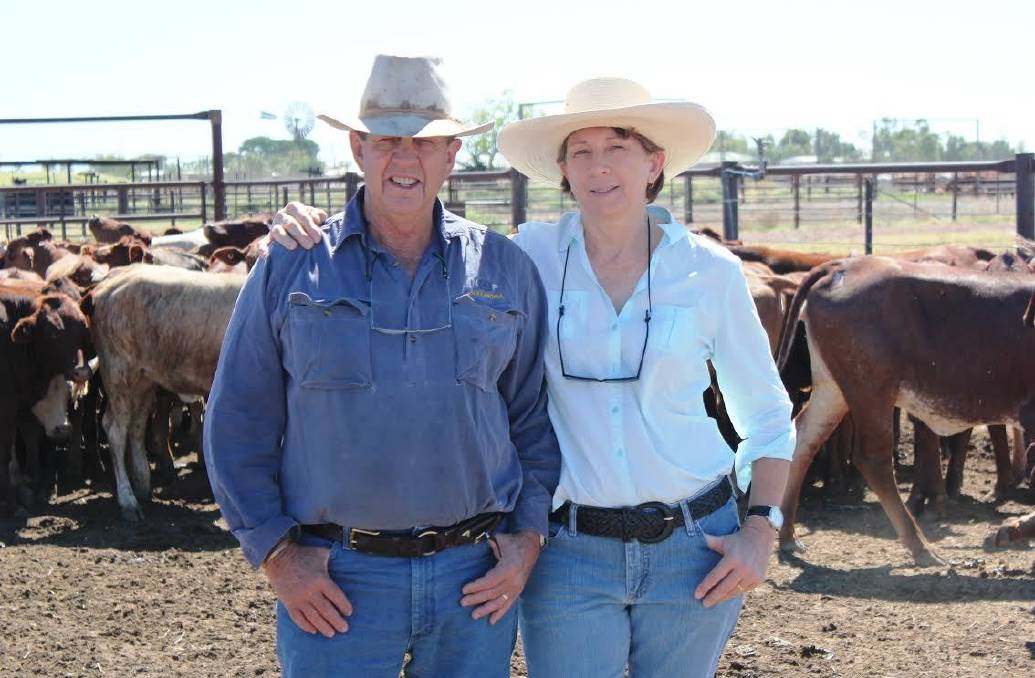 EARLY ADOPTERS: Ross and Robyn Peatling with grower heifers on Alexandria Station in the Northern Territory.

But when Alexandria Station in the Northern Territory's Barkly Tablelands first started implementing these type of practices in the 1990s they were unheard of.

Ross Peatling, who managed the 16 million hectare station for the North Australian Pastoral Company for 23 years up until 2014, remembers plenty of people looking over the fence shaking their heads.

Yet as those measures delivered big dividends at "Alex" they were copied across the north. The willingness of Mr Peatling, and Alexandria Station's owners, to blaze trails set new standards for northern beef production.

In recognition, Mr Peatling was awarded the 2019 North Australia Beef Research Council Producer Medal at a beef research conference in Brisbane this month.

NABRC chairman Dr Lee Fitzpatrick said what was particularly notable about Ross Peatling was that he did not sit back and merely copy the innovations of others. Rather, he was a visionary and an early adopter of emerging technologies.

Mr Peatling, who today occupies his days with advisory work and 'odd jobs' and lives at Allora with wife Robyn, said the successes at Alex came from a problem-solving mindset and a philosophy of working with, rather than against, the country and livestock.

"One of our biggest problems was keeping bulls away from maiden heifers so the decision to join earlier was actually borne from that," he said.

"Of course, the overarching goal was always fertility - breeding a tropically-adapted, low-maintenance, highly-fertile female - so when we weighed up the risks and advantages of joining yearlings, it made sense.

"We only selected replacement heifers from those weaned in the first branding round. That ensured we were getting the genetics from the highly fertile ones."

The end result was two more calves per breeder in a lifetime.

"It was a big efficiency gain but also we were making management fit in with what the cattle wanted to do naturally," Mr Peatling said.

The son of an urban accountant, Ross Peatling has 'no idea why he went bush' but after collecting his certificate in animal husbandry as a foundation student at the Longreach Pastoral College, he worked as a jackaroo, then managed a Gulf property and went south to NSW as a livestock co-ordinator before finding himself at Alex.

The station, north-west of Mount Isa, is open mitchell grass downs country with gidgee woodland on the eastern side and some sandridge.

It runs 70,000 head, depending on seasons, with cattle sent south to NAPCO grower properties in the Channel Country. The aim is turning off feedlot two-tooth Jap ox.

In Mr Peatling's time at Alex a composite was bred, with Shorthorn, Brahman, Charolais, Afrikaner and Hereford content.

"We worked on 85 per cent branding, which was excellent in that country," Mr Peatling said.

"We did herd segregation and pregnancy testing. The whole management revolved around fertility and calf numbers.

"Heifers stayed within the one group for their entire life span which meant any reproductive diseases were contained."

When development of watered areas at Alex started in 2005, it also raised eyebrows - 60 bores plus pump-outs and hundreds of troughs don't come cheap.

"We were thinking about better utilisation of all country and wanted to have it so cattle didn't walk more than five kilometres for water," Mr Peatling said.

Making cattle, country and people the top priorities is the best foundation on which to build a successful beef operation and trial innovations, according to Mr Peatling.

"Don't over-utilise the pasture - mitchell grass country can be utilised at 25pc. You have to treat the country right first," he said.

"Make sure all cattle are productive, don't carry any passengers, and then make your management decisions fit in with what is best for livestock.

"Include staff in management decisions - give them ownership of their jobs."

Mr Peatling said he was also well supported by his wife, Robyn, in all aspects of his work.