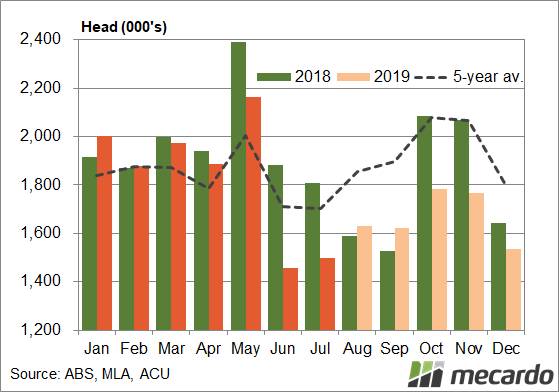 The lower numbers slaughtered in June came in at an average carcase weight of 23.9kgs.

OFFICIAL lamb and sheep slaughter figures for July were released last week, with lamb falling off the cliff in June and July, and sheep easing back. June lamb slaughter hit 1.455 million head, which was the lowest monthly level since January 2012.

One interesting stat was the record carcase weights reached in June and almost maintained in July.

The lower numbers slaughtered in June came in at an average carcase weight of 23.9kgs.

Despite June and July having extremely low slaughter rates, and August also expected to be low, the next four months are also going to have to be tight to hit MLA's slaughter forecast of 21.2 million head.

The big supply months of October and November will have to be 14.5pc lower than last year to hit the target.

The decline in sheep slaughter in June and July was of a similar magnitude to lambs.

The ABS figures had both June and July 15pc lower than 2018. It should be noted that 2018 was a strong year, with the 8.5 million forecast for 2019 being a million head lower. To hit the 8.5 million target, sheep slaughter will have to be 19pc below last year's levels.

Lamb and sheep supplies will have to remain much tighter than last year to hit MLA's forecasts.