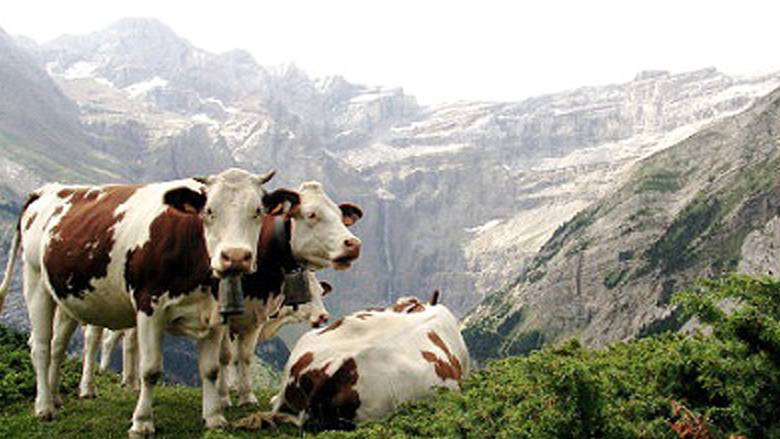 Farmers in Switzerland enjoy, on average, 60 per cent income support writes Tom Marland in this week's The Gauge.

I recently had the opportunity to spend a few weeks in Europe for a family wedding. It also allowed me to finally take my wife on our honeymoon - eight years late is better than never.

Europe is great once you get over the constant fear of death driving on their roads, work out how to use their shower taps and forget about the horrible Aussie dollar exchange rate.

I was most impressed with Switzerland. Everything was neat and orderly. Green grass, fat cows, healthy crops and tidy sheds and houses.

We pulled up in a little farming town called Walenstadt just outside of Lucerne for a closer inspection. I was dumbfounded by the lack of bailing twine, zip ties and cobb and cos keeping the show together. We were treated to a demonstration of a brand new John Deere tractor that would put a Goondiwindi cotton farmer to shame doing some laps around a lush paddock picking up a few strangled looking hay bales.

Of course, I was intrigued to see what a slice of this bit of heaven would cost to get into. First problem, they don't value farmland on a per hectare or acre basis - it's all in square meters so comparing BAVs was a bit tricky. Secondly, the average farm runs 23 cows. Thirdly, there wasn't much on the market - you either have to inherit it or marry it (a bit similar to Taroom country).

A bit of reconnaissance into the lack of farm land for sale revealed that farmers in Switzerland enjoy, on average, 60 per cent income support. Some, in high tourist areas, receive up to 90pc. Switzerland has the third highest level of farm subsidies in Europe after Norway and Iceland.

Switzerland farmers cost Swiss tax payers $19.9 billion Swiss francs ($A30 billion) a year but only deliver $4.9 billion in return. Import restrictions, inflated consumer prices, environmental services and export restrictions all point to the fact that farmers are basically paid to farm in Switzerland. And how wonderful it must be!

Rather than Australian farmers, who enjoy less than two per cent government income support and are routinely treated like third-class citizens for being environmental vandals, animal abusers and "free loaders" by their urban compatriots, Swiss farmers are revered as hard working, intelligent and important members of society.

Farm subsidies obviously aren't just limited to Switzerland. The EU operates the Common Agricultural Policy which hands out over $50 billion euro ($A90 billion) in farm subsidies across the 28 EU affiliated countries. This is on top of the subsidies supplied by each country.

One night on our world-wind tour we dined at an Italian steak house in the sea side village of Gaeta (no descendants of the Ballantynes, Roffeys or Campbells live there). I was intrigued that the menu had various cuts from various countries and all quoted per 100 grams. British Black Angus was eight euro per 100 gram, Italian Black Angus seven euros and Australian Black Angus.....five euros.

Don't mind the food miles but somehow Australian meat ends up on a menu at a small village in Italy for two euros cheaper than they can produce themselves. We all ordered the different cuts and the taste and quality of the British and Italian cuts where the same if not, in my bias opinion, inferior to the Australian cuts.

Australia is obviously at a disadvantage dancing on the world stage of global agricultural competition. We have a small population, geographically isolated and the second-driest continent on earth behind Antarctica.

We all hail the "safe, clean and green" mantra of our food and fibre which is marketed all over the world. While the quality of our product is first class, we are getting the wrong end of the pineapple when it comes to a fair return on our blood, sweat and tears.

How are producers meant to compete or even access some European markets when those markets are so heavily protected and supported by individual countries and when we do our product is discounted because of artificially-manipulated competition?

One also wonders why a country like Australia, that is so geographically isolated and at the mercy of droughts, cyclones and floods doesn't invest more in supporting and sustaining their agricultural producers rather than treating them like punching bags every election time.

It might be time to swap the RMs in for some lederhosens and the Brahmans in for....whatever they run in Switzerland.

- Tom Marland is an agribusiness lawyer based in Bundaberg, Queensland. He is also the author of the blog, Food for Thought, Thought for Food.