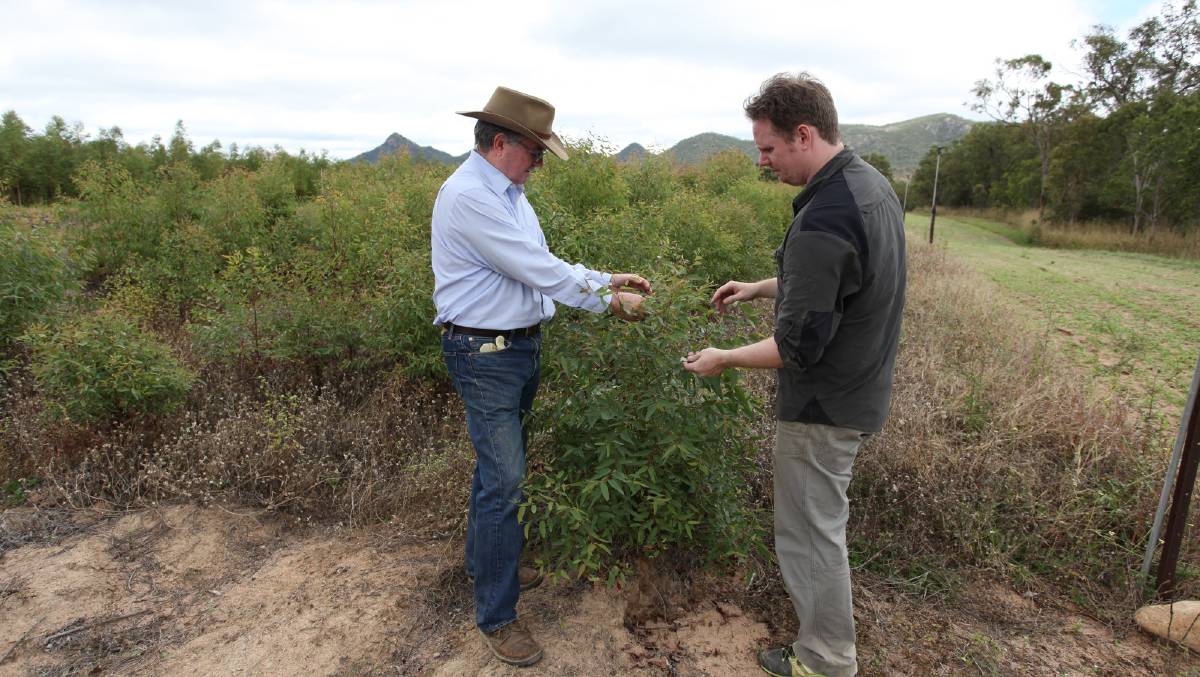 FROM NATURE: Bio-Gene Technology executive director research and development Peter May with program manager Dr. James Wade and one of the eucalypt species which produces an insecticidal compound.

A new insecticide that could be the key to sustainable grain protection has been funded by BASF.

A new insecticide, based on a compound found in a rare Queensland eucalypt, could be a game-changer in the fight against grain storage pests.

Bio-Gene Technology chief executive officer Richard Jagger said the partnership involved both direct contribution in terms of funding and expertise from BASF, while the research itself would be conducted by the Queensland Government's Department of Agriculture and Fisheries.

Pests of stored grain are a significant cost to the global grains industry, both in terms of direct damage to product as well as the costs associated with limiting access to overseas markets as well as the management of bio-security risks.

Mr Jagger said the arsenal of insecticides for crop and grain protection had reduced significantly over the last twenty years, due to both reductions in efficacy and toxicology concerns, meaning there was an excellent fit for new insecticides based on natural compounds.

"What makes these products special is that they have a novel mode of action that is quite different from anything on the market today," he said.

"If insect resistance to other chemistry through over-exposure or time has occurred, it is unlikely any resistance has developed to these molecules.

"That is very important in an industry where we have lost a lot of the available chemistry over the years due to resistance, and also due to issues and concerns over toxicology or toxicity in the environment."

Mr Jagger said there hadn't been a new mode-of-action insecticide released since 2008, meaning Flavocide could be a game-changer in terms of managing resistant pests.

"Our research has shown it is not a simple mode-of-action, there is some interaction of systems and that can inherently mean it is unlikely to develop resistance," he said.

Mr Jagger said the proposed studies would build upon previous work conducted by Bio-Gene and DAF where Flavocide proved successful when combined with existing chemistry against a broad range of insect pests.

"The exciting thing for us is that there is a lot of applications for this class of chemistry," he said.

Mr Jagger said future applications could include a wide range of applications, including use against pests of human health, such as mosquitoes, household use and crop protection.

"The chemistry has also proven very safe to bees and other beneficial insects, compared to the neo-nicotinoids our studies show we are about 5000 times less toxic to bees," he said.

"Bee populations, in particular, being a concern across the world we think there is a lot of potential of this technology to help reduce the use of other chemistry that may be more harmful."