Meat industry strategic plan to be launched in Canberra today. 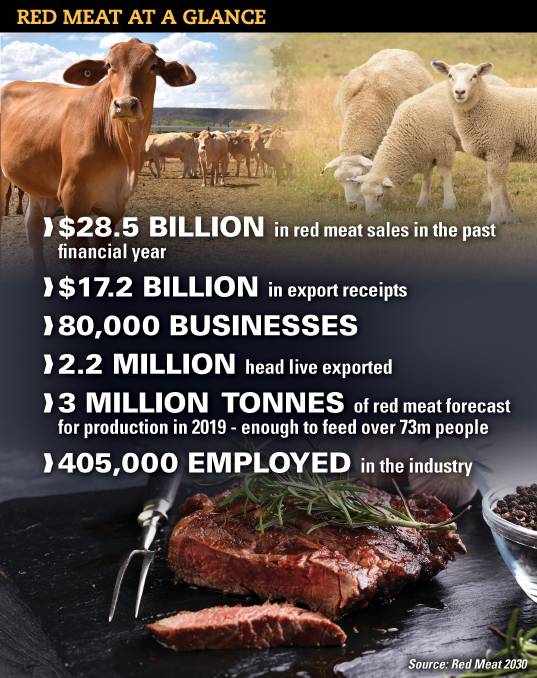 UNPRECEDENTED resources are to be channeled into advocating for red meat and educating the wider community on the vital role the industry plays.

This is one of the highlights of the new red meat industry strategic plan, which guides the priorities for how the funds coming into its research development corporations over the next ten years are spent.

The plan, called Red Meat 2030, is the result of extensive nationwide consultation facilitated by the Red Meat Advisory Council and will be launched in Canberra today.

Another key element is the dedication of up to 10 per cent of R&D project budgets to extension, a measure aimed at lifting adoption of the cutting-edge scientific findings coming down the beef, sheepmeat and goat pipeline.

Red meat's RDCs - Meat & Livestock Australia, the Australian Meat Processing Corporation and LiveCorp - use the strategic plan as a guiding document for expenditure.

In the next five years alone, around $1b in both levies and matching Federal Government funds is expected to move through those three RDCs.

The plan sets out the pathway for Australian red meat to double in value and deliver $57 billion in growth to Australian agriculture by 2030, which accounts for the lion's share of the National Farmers' Federation's much-touted $100b target.

Objectives have been assigned to six priority areas - people, customers, livestock, markets, the environment and systems - which will be delivered through industry-led task forces.

RMAC chair Don Mackay said while many of those priorities were part of the last strategic plan, set five years ago, the extent to which the industry was now responding to community expectations was unprecedented.

That included those who don't eat meat, he said, with the recognition being they still need to feel comfortable about the way the red meat industry operates.

"Never before has the broader community been included in our strategic plan to this extent," Mr Mackay said.

"Our industry has been working collectively to make sure we take a proactive approach to the information we provide to ensure people feel good about eating Australian red meat, recognise the vital role our industry plays in food security and trusts us to deliver high-quality products," he said.

"We need to be upfront in telling people this is what we do. We are the guardians of your national estate, we are dealing with carbon and our environmental footprint and we care for our livestock and people to the highest standards.

"If we are explaining and defending, it is too late."

The initiatives surrounding this priority will largely be delivered via an Industry Affairs Unit.

"Red meat producers have enormous support from the community but we can't assume it and we can't let misinformation go unchallenged," Mr Mackay said.

The second significant change, around extension and adoption, recognises the space left by government withdrawal from extension services has not, in all cases, been filled by the private sector.

It's also about ensuring research never ends up just sitting on a shelf.

"In some parts of our industry, for example intensive sectors, there is a mature consultancy network but as a general statement, it needs more help," Mr Mackay said.

Red Meat 2030 also demonstrates an appetite for serious reform, with the formation of a single integrity organisation on the agenda.

This was one of the recommendations in the review of red meat's Memorandum of Understanding, the document that deals with how the industry is structured.

That process has been running parallel to the formation of the industry strategic plan and is currently awaiting responses from peak industry groups.

The single integrity organisation is the only area where the two overlap and Mr Mackay said it was in no way an indication that other MoU recommendations were to be shelved, however the two processes should be viewed separately.

"The delivery of Red Meat 2030 is not agripolitical," he said.

"It has involved collaboration across the industry that is structure agnostic."

Red Meat 2030 and what it means for customers and businesses can be viewed at www.redmeatat2030.com.au.

More from today's launch, and a follow-up on the MoU, to come.