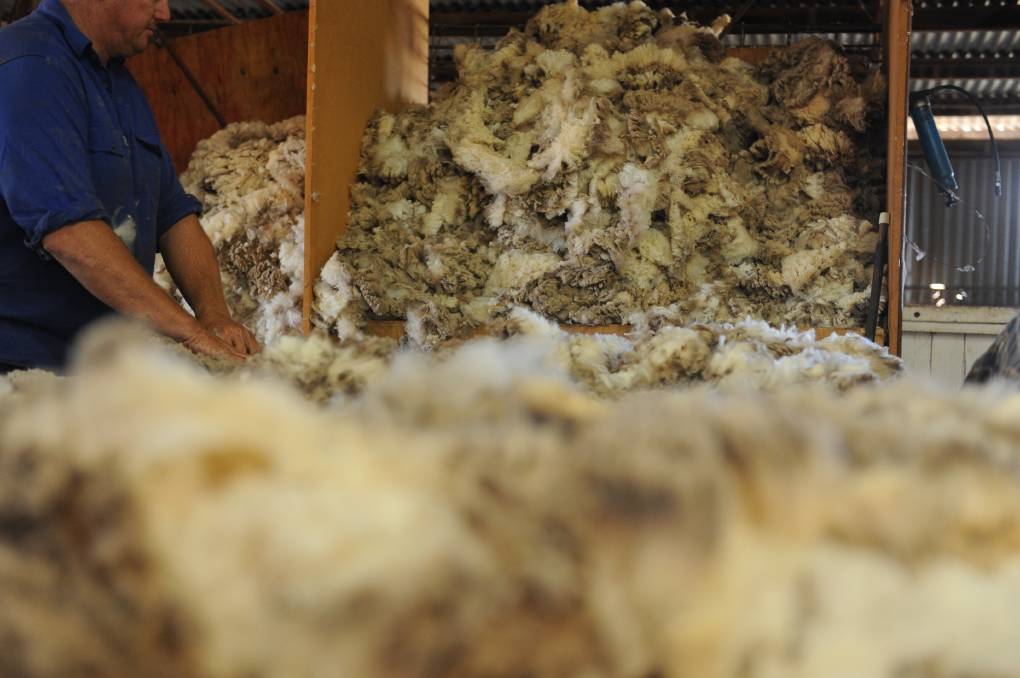 In the overall scheme of the past three months, a move of 26c/kg in the Eastern Market Indicator for the week was considered fairly benign.

In the overall scheme of the past three months, a move of 26c/kg in the Eastern Market Indicator for the week was considered fairly benign.

Finally, a week with not a lot of change - hard to imagine people would be saying that when some types of wool moved down by 50 cents a kilogram - but in the overall scheme of the past three months, a move of 26c/kg in the Eastern Market Indicator for the week was considered fairly benign.

After the previous upward swing, the pendulum was indicating a bit of a correction and that certainly occurred on the first day of selling where the broader Merino types eased by about 50c/kg.

The better style wools and the superfine types were not affected anywhere nearly as much as has been the case for much of the time recently.

The base types - that is good style, well measured Merino fleece, is selling well and there is enough demand for them each week.

When play resumed on the second day all of the Merino types were solid and finished the day stronger, so whilst still having negative scores for the week, the movement was considered relatively subdued and with a firming tendency.

The EMI closed down a measly US12c/kg as supply was tightened further with some clips being withdrawn from sale prior to the start of the auction.

Numbers in the hold sale are mounting as growers decide not to offer wool until the downstream market provides a more clear and realistic idea of direction.

This, coupled with a fairly ordinary growing season - tending to terrible in many places, means that this week's Sydney sale, in the midst of the 'spring flush' can only muster 5000 bales and so will be a one-day affair only.

A slightly smaller sale in the Cape next week as well will ensure buyers get in early to cover requirements so they don't leave any boxes half-finished to carry over, as next week would wrap up any October shipment orders.

Then the focus can move forward to flipping that page on the calendar, well after another week anyway, to get out of the dull spot which is, and always is, October.

Retail should start to crank up with consumers getting a bit more serious about their winter clothing purchases.

This normal seasonality together with some 'time-honoured traditional shopping festivals' - which are not in any way contrived by the retail fraternity - being Singles Day in China and Black Friday in the US, will hopefully provide some ticks of approval on the clipboards of the bean counters.

Once they have seen a bit of stuff move off the shelf or out of the warehouse they will be in a better frame of mind to loosen the purse strings for next season's orders.

Unfortunately, the industry is waiting for these orders to a large degree, and normally there have been enough last-minute orders from the previous season to empty the pipeline and sustain a bit of momentum through the valley of death.

August/September 2019 will be noted in the annuls of history as a very difficult time for the wool market, when it copped some nasty whacks, but certainly not a fatal blow.

Growers have been protected to a degree by the lower Australian dollar, which is currently hovering around .6800 US dollars.

Not long ago back in January, those who were not switched off at the beach saw the "flash crash" where a fat finger or computer malfunction dropped the currency from .7250 to .6743 - and at the time it seemed an incredibly low level.

If the currency was still around the mid 72s arguably the wool price would be 100 cents lower than it currently is.

The other factor assisting growers to ride out the current turmoil in the auction room is the extraordinarily healthy price for sheep in the saleyards whether the purchaser be re-stocker or processor.

But everyone in the wool industry wants to see a return to better, less volatile conditions and that is sure to come in the not too distant future.

As Edwina McCann, editor of Vogue Australia, who was at Anlaby Station to preview the Albus Lumen travel collection last week, mentioned the 'only' word being thrown about in the fashion industry at present is 'sustainability'.

Wool ticks this box in every way, and it will be this, riding on the coat tails of new-age marketing that gets the industry back at the top of the tree again in a short period of time.

Like it or not, marketing is being done differently these days and influencers are more important than traditional advertising on its own.

The number of followers (therefore possible consumers) these four people brought to the table was around 500 million.

Compared to a Super Bowl TV advert reaching 100 million on a good day shows what this new-fangled stuff can do.

Yes, Armani, Gucci and Prada are probably already doing it, but somebody needs to be in their ear to mention the word 'Merino' as well.

This form of advertising and promotion, unlikely to be seen by the average wool grower in Australia, is what is going to push the well-heeled millennial to part with some serious cash for a Merino garment.

In doing so they will be doing their bit to help save the planet, but there is still a lot of education to be done.

Another couple of 'influencers' Bojo and Dodo appear to be kicking some goals, although how much can be directly attributed to them and whether they will be around to see it through to fruition is less than certain.

However, if Brexit can be achieved in anything less than a mild chaos most will be pleased.

Similarly, if some form of agreement, not matter how small can actually be signed by China and the US it will be a very positive step that will give many industries a boost of confidence, and the wool industry has always been about confidence.