Some of the yarding on offer in Dubbo last week.

Southern Australian cattle buyers have given a clear signal they're prepared to pay for quality cattle out of NSW and Queensland.

Friday's Dubbo store sale yarded 3000 head, 2500 of which were a line of Angus/Santa Gertrudis steers and heifers offered by the Walker family from Coonamble in NSW.

The cattle were bred on their properties near St George in Queensland, and while most of the offering had been trucked to Coonamble around six months ago, some were sent direct to the sale from up north.

Seasonal conditions meant instead of fattening them for the processors, the Walkers decided to offload early to the store market.

"Terrific sale, better than what we thought it would be, but everyone knows they are good cattle," he said.

"Good luck to the people that bought them."

That reputation was enough to attract buyers from across Victoria and South Australia.

An Echuca buyer paid $950 for 110 steers from the draft, with buyers from Shepparton and Ballarat also taking home Walker cattle. 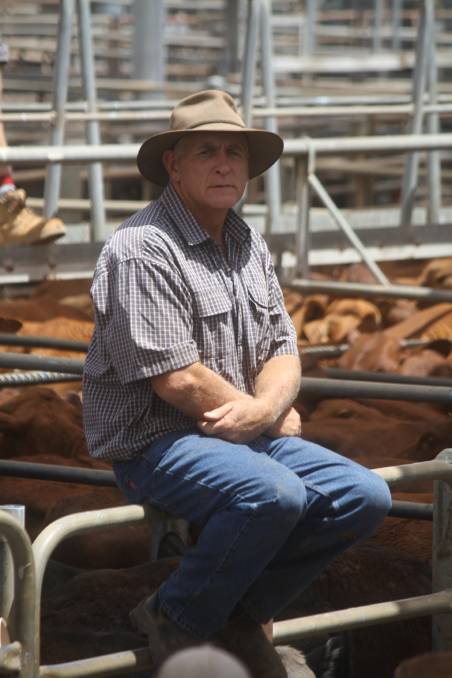 Mick Walker keeping an eye on his 2500 steers an heifers sold at the Dubbo store sale last Friday.

Also buying were South Australian agents Prostock on behalf of clients, including lotfeeders, in the Adelaide Hills.

Managing director Kym Endersby described the season there as very good, and as well as the sale in Dubbo, they've bought a lot of cattle this year out of NSW and Queensland for two main reasons.

"The quality of the breeding and the price," he said.

"We're always looking for good cattle, and we'll always look at the delivered price, and if that's less then what we can buy them for here, then of course we'll look at it."

But Mr Endersby said there are limitations on what his clients will buy.

"We don't buy many cattle with to much bos Indicus, or yak," he said.

"There is buyer resistance here to some of those cattle, and we've got to market to what this area demands."

After some light numbers at southern store sales during October there was an expectation that good lines of quality cattle will be offered up to Christmas.

But good rain across Victoria and South Australia this week has led to expectations some vendors will hold their cattle a little longer to take advantage of the strong demand for well finished cattle.

Mt Gambier holds its monthly store sale on Friday with around 1800 expected earlier in the week.

But last weekend the region had up to 30mm of rain with forecasts of more, and agents expect that number to go down.

While southern Australia's had a good season and expects a good summer large parts of the country's cattle producing areas remain in drought.

But the demand for livestock and the prices paid have defied expectations.

For the year-to-date up to the end of October the average for the Eastern Young Cattle Indicator was just over 484 cents per kilogram.

While that's below the 2016 average of 634c/kg it's an impressive figure when the number of cattle that have gone to market, and the light condition of many of them, is taken into account.