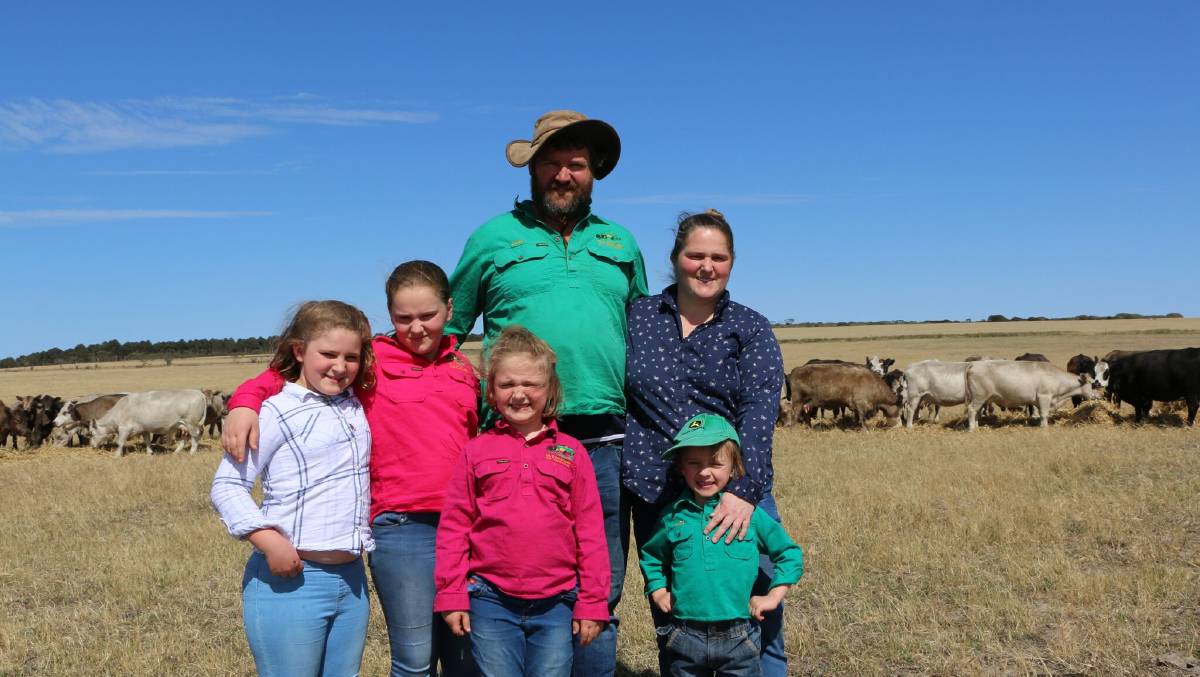 David and Suzie Styles with their children Elsie (8), Mietta (11), Brydee (6) and Naite (4) at their Condingup property.

A love of family and preserving the heritage of the family farm are the values at the heart of the cattle property of David and Suzie Styles.

A LOVE of family and preserving the heritage of the family farm are the values at the heart of the cattle property of David and Suzie Styles.

The Styles family is one of the original pioneers to open up the farming land in the Kettles Road area, Condingup, Western Australia.

David's grandfather Walter 'Wally' Styles was one of the original settlers of this remote farming land east of Esperance, acquiring the land as a conditional purchase block.

The farm was then operated by David's father, Graham Styles.

Today, David and his wife Suzie are one of the few pioneer families still farming in the area.

They continue in the footsteps of forefathers still farming on the original 800 hectare property where they live with their four children Mietta (11), Elsie (8), Brydee (6) and Naite (4).

The history of cattle production on the farm began in 1967, when Wally brought the first cows to the farm.

"My grandfather started out with Poll Herefords, bringing them all the way from Quirindi in New South Wales," David said.

"It was a long, tough journey back then.

"The cattle were trucked from Quirindi and then put on another truck to Broken Hill, then a train to Norseman and then trucked to the farm."

David affectionately recalls how his interest was sparked in cattle farming, thanking his father for getting him into it.

"Instead of paying me with money, my dad paid me for some work with 10 heifers and 10 steers and it went from there," he said.

In more recent times, the Styles family has built on the cattle herd foundations laid down by their grandfather, by manipulating the breeding program to produce cattle that are suited to current supply chain demands. 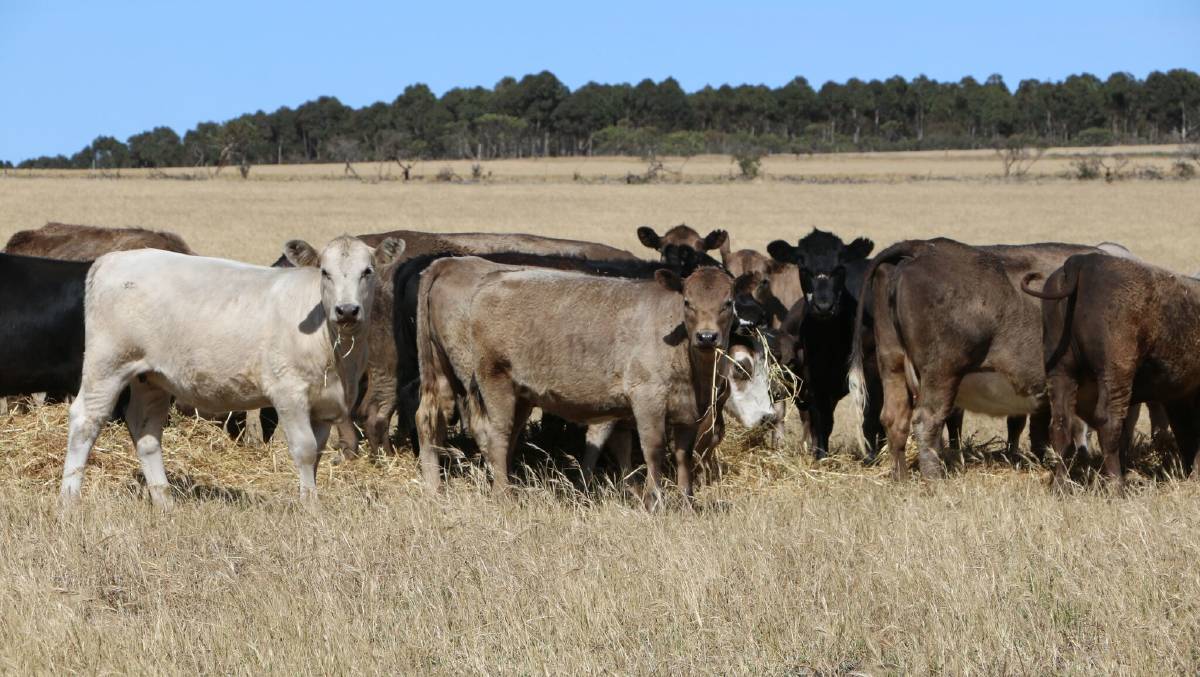 This continued until 2015, when David and Suzie moved to using only black Angus bulls over a mix of Hereford/Murray Grey and Hereford/Angus breeders.

The decision to use black Angus bulls was driven by both supply chain and consumer demand.

"It's what the market wants," David said.

"There is a big demand for black calves and then grey calves as a second.

"People would ring up and be asking for black calves and if we didn't have any, then they'd be looking for grey ones."

The choice to move to the Angus bulls was cemented with the advice from their livestock agent and mentor, the late Peter 'Windy' Gale.

"Basically, Windy was honest enough to break it to us that the cattle we had weren't really in line with the market demand these days (the market being store cattle for feedlot) and we were sensible enough to listen to him," David said.

"We sell to cattle lotfeeders and they seem to prefer the Angus crosses, so we have developed our cattle to reflect this.

"All the consumers are looking for an Angus burger or steak," Suzie said.

"So we are growing our cattle to fill that demand.

"You are better off producing what there is a demand for and not what is our personal favourite type of animal."

"The calves seem to be free growing out of our relatively small frame Hereford-based cows.

"It's not uncommon for the calf to stand as tall as its mother by nine months of age.

"Andrew and Fiona (Kuss) are always good to consult with on inspection day. 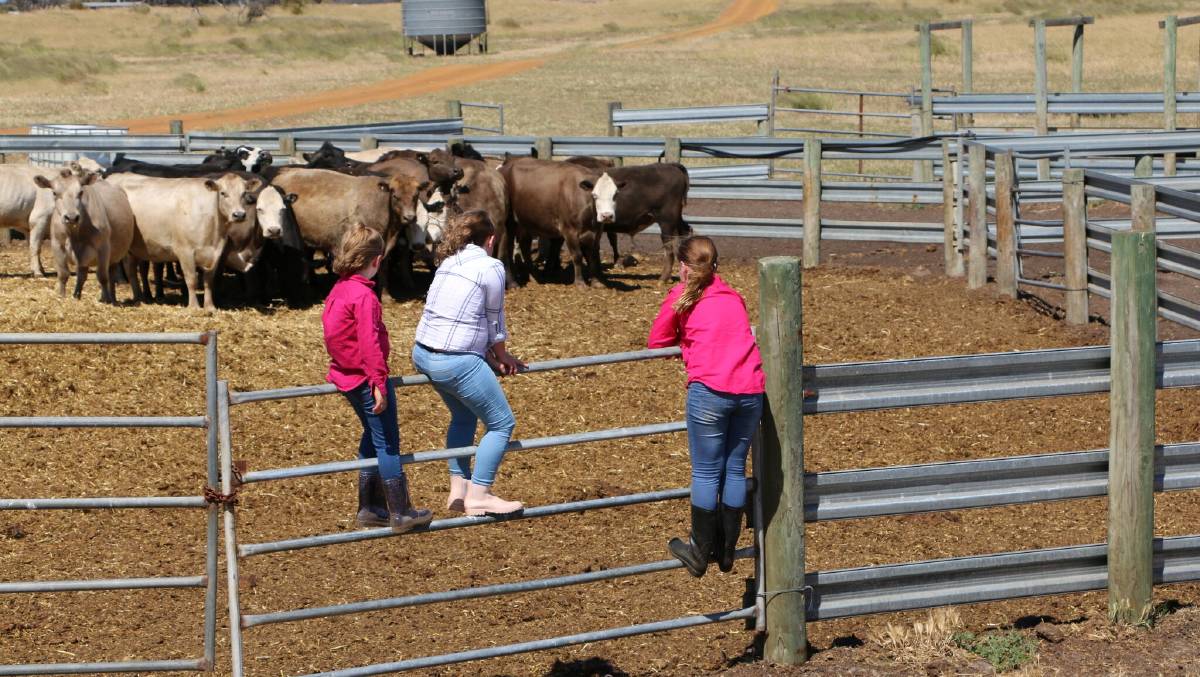 Brydee (left), Elsie and Mietta Styles cast a watchful eye over the family's cattle in the yards.

"They have a wealth of knowledge of beef cattle and which bulls would complement the type of cows we have which helps us get where we want to go."

Suzie said the Angus-cross calves also got away from the bad eye problems that the Herefords could have.

"So we prefer the cross-bred calves which suit the climate here better," she said.

David and Suzie prefer the mature cows to calve in March, with the heifers calving about six weeks earlier.

"This works well with the season in Esperance," Suzie said.

"We keep them on their mums and then feed them on stubble and monitor weaning time.

"Generally we wean around Christmas time, depending on the season and the condition of the cows."

David and Suzie have consistently run about 200 breeders in previous years.

However, concerned with the variable rainfall pattern and the possibility of the region experiencing a drought in the future, they have reduced the numbers of breeders to 170.

"We are doing a bit of forward planning for the future," David said.

"That way we are prepared and will have enough water for the cattle.

"We are getting drought prepared and want to be smart about the water availability."

Looking towards the future, the Styles family is committed to the long-term viability of its farming enterprise and has put in plans to ensure the farm's sustainability.

In addition to producing cattle, the family also crops about a third of the property to barley and canola, grows hay for their cattle and runs about 500 sheep.

David said this helped to spread the risk and helped with cash-flow and budgeting.

In 2004 David and Suzie started a hay contracting business to complement the existing on farm cattle production, by providing additional off farm income.

The hay contracting started after regular demand from local clients.

"People kept ringing up and asking if I could do it," David said.

"I enjoyed the job and the demand was there, so it all went from there.

"Now we have some loyal, regular clients which keeps us very busy during the season."

The start of the hay contracting business coincided with the year that David and Suzie were married.

Suzie said it was a mistake getting married in October.

"We have never celebrated our wedding anniversary and we probably never will again," she joked.

As part of their sustainability plans, a program of clay spreading is being undertaken to combat the non-wetting, water repellent soils of the Esperance region.

"If we get any summer rainfall, which we usually do, but it is getting rarer, then if the soils are well prepared to absorb this valuable water then it can make a real difference to the amount of feed available to the cattle over summer as we have some couch and veldt grass which responds to summer rain," David said.

"As the summer rainfall seems to be less reliable, the better prepared the soil, the more we can take advantage of any rain.

"It is expensive though, so we do a bit at a time."

David and Suzie also have future plans to develop their cattle production to meet the increasing market demand for grassfed beef.

After attending a recent field day on grassfed beef finishing systems, held by the Association for Sheep Husbandry, Excellence, Evaluation and Production (ASHEEP), David was inspired to look at how they could implement these systems on their farm, including growing specific pastures types.

Family involvement is at the heart of the running of the farm, with the extended family contributing towards the on farm management.

David's father and mother Graham and Linda Styles help manage the cattle side of the business, with Suzie's father Neville Shepherd and his partner Heather assisting with the hay contracting.

Having the family together and supporting each other on the farm is an important part of why Suzie loves the farming lifestyle and it is perfect for raising their four young children.

"I love how we all work together as a family, it's really special," Suzie said.

"It's nice that we can all work together as a family and help each other out," she said.