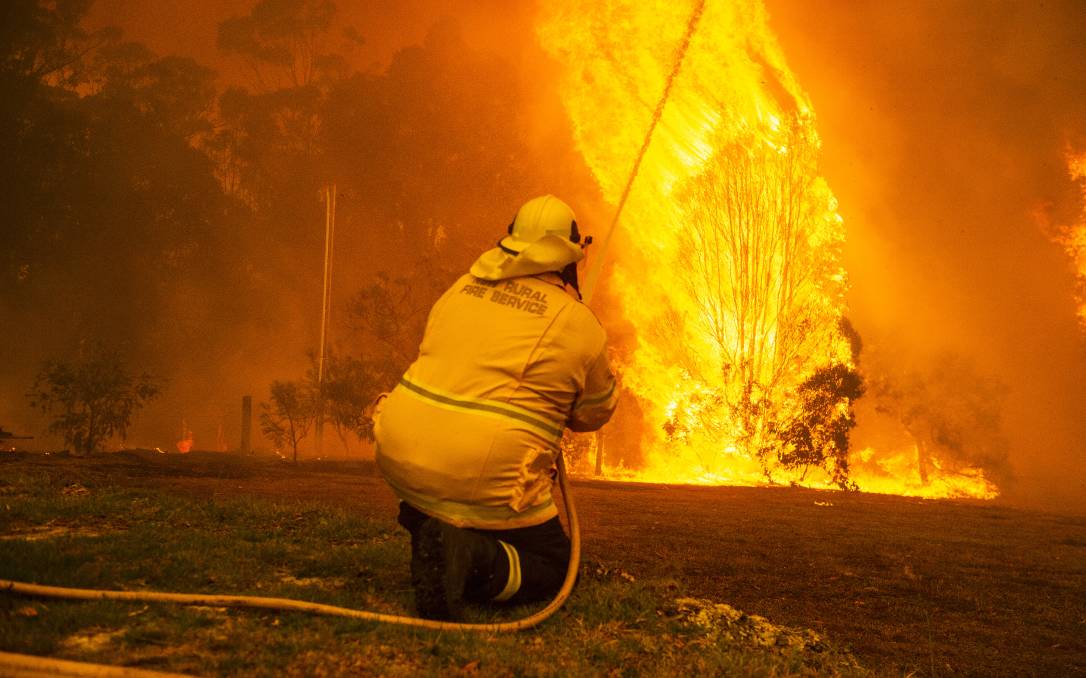 HORRENDOUS: Losses to dairy and beef operations from the bushfires since Christmas have been enormous and another flashpoint is expected this week. Photo: DION GEORGOPOULOS.

Producers burying lost stock and forced to tip milk out

THOUSANDS of head of cattle have been lost in the devastating bushfires raging across southern Australian and hundreds of thousands of litres of milk are likely to be tipped out before tankers can again reach dairies.

However, it's ongoing fodder supplies to keep cattle on scorched properties alive, and producer mental health, that industry leaders are most concerned about.

Producers are currently facing the dreadful job of burying lost stock, many of which had to be euthanised. It's a job that has to be attended to immediately.

In NSW, authorities have put stock losses from bushfires this season at 3900 up until today. That number, from the NSW Department of Primary Industries, includes around 700 stock killed or euthanised as a result of fires in the Northern Tablelands, North Coast and Hunter areas before Christmas. Approximately 400 head was also lost as a result of fires around the Lithgow and Bathurst areas over the Christmas and New Year period.

In Victoria, where a State of Disaster has been declared for six local government areas and the Alpine Resorts, it's still far too early to estimate losses, although authorities have conducted more than 50 initial assessments.

The full scale of the stock losses, lost production and destroyed pastures and infrastructure are not expected to be known for weeks, possibly months.

In both states, the dairy industry has been heavily impacted, with heifer losses exceptionally high, producers and industry leaders have reported.

Industry leaders said processors were continuing to pay for milk that has to be spilled.

While drizzling rain has arrived in many of the areas affected, the concern is for another flashpoint later in the week.

In some areas, police were providing escorts for tankers and the need to get fodder trucks into farms with no feed was fast emerging as a major issue, he said.

"For an industry already hard hit by ongoing drought, this is yet another component to deal with," Mr Morgan said.

"The bushfires will heavily impact milk supply going forward and will likely be the final catalyst for many who were contemplating exiting the industry."

The NSW DPI and Local Land Services are providing assistance to fire affected landholders with emergency fodder and water, animal care, livestock assessment, and where necessary stock euthanasia and burial.

Producers should call 1800 814 647 or send a direct message via the NSW DPI Facebook page.

NSW state incident controller Karen Roberts said given the scale of the fires and the areas they had impacted, it was expected the number of stock reported to have died or been injured to rise as landholders and field assessment teams are able to access properties and report damage.

Agriculture Victoria incident agency commander Brett Harrison said a mix of dairy, beef and sheep farms had been affected and a clearer picture of the extent of the impacts would emerge as field staff accessed fire grounds.

"In many cases farmers are still waiting to get access to their properties, but it's important once they do they examine livestock quickly and report any injuries to Agriculture Victoria," he said.

However, authorities have emphasised that landholders do not need to wait for staff to visit to euthanise impacted livestock if they are confident they can do so humanely and safely.

The Victorian Farmers Federation is leading the drive to provide fodder to affected farmers and is establishing depots where fodder can be delivered and collected.

Landholders who need emergency fodder, and those who want to donate fodder to help out, should phone 1300 882 833 or email fodder@vff.org.au.