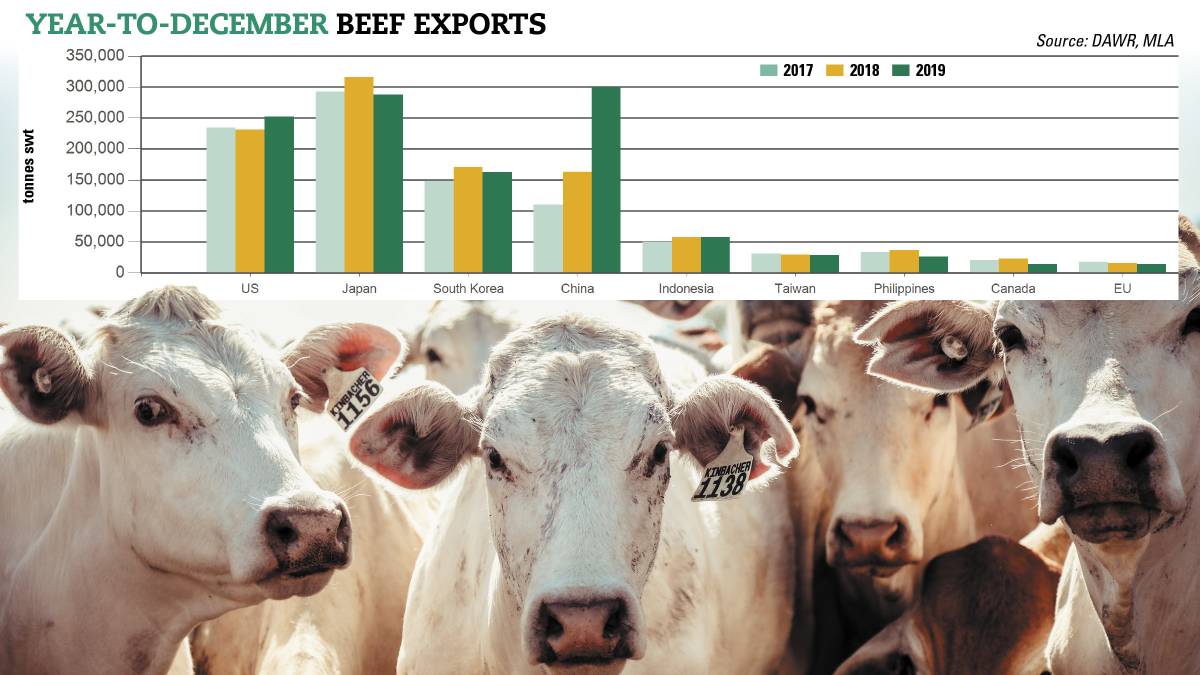 THE red hot demand for Australian beef that has helped hold cattle prices up against a backdrop of drought-induced offloading has led to a turning point, the release of new Federal Government export data shows.

For the first time ever, China has taken the crown as Australia's largest beef market, volume-wise, over a calendar year, on the back of an incredible 84 per cent year-on-year lift.

China accounted for 300,132 tonnes of Australian beef shipped weight in 2019, the Department of Agriculture reported.

ALSO IN CATTLE: Signs are few, but good, for young cattle prices

Overall, beef exports for 2019 came in at over 1.2m tonnes, which puts the result in the top three figures of all time, according to Meat & Livestock Australia data.

The rise of China was always going to happen but was propelled by the spread of African Swine Fever which has decimated 40 per cent of China's pig population and forced the country to look for animal protein alternatives around the world, market analysts said.

Associate director at NAB Group Economics Phin Ziebell said and there had been an upward trend in Australian beef and sheep meat prices in Chinese domestic markets for some time.

"China is a massive country in terms of population and while pork and chicken dominate meat consumption, keep in mind China's beef market has only been open for less than a decade," he said.

"But there is no question swine fever has had a massive impact on Chinese meat prices.

"The question will be in five years time once China is back on track with domestic supply, how does Australia keep prices high in that market because ultimately we are not a low-cost producer so we'll need to retain margins."

Rabobank senior animal proteins analyst Angus Gildey-Baird said the speed and extent to which volumes to China grew late last year did come as some surprise.

"China's willingness to pay more for the product attracted volumes away from our traditional markets," he said.

That average is obviously affected by cuts - for example Australia sends a lot of brisket to Japan, a lower-value cut.

However, in 2018 Australia's average price to China was 7.63/kg while the other markets stayed relatively similar, Mr Gidley-Baird said.

The 9pc lift in beef export volumes to the US could be somewhat of a recovery after a decline the previous year, the analysts said.

"In addition, a lot of New Zealand product went to China so Australia possibly made up that difference in the US," Mr Gidley-Baird said.

ALSO IN BEEF: The paths to boosting northern beef production