"We've had three failed crops in a row - that's unheard of for my region in the 40 years I've been farming there." 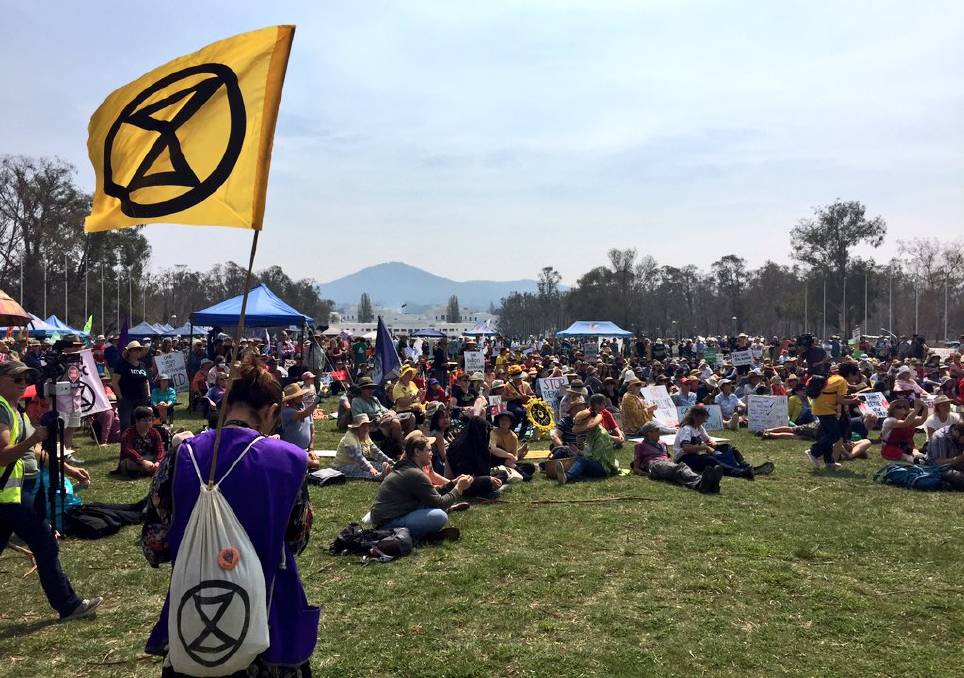 FARMERS were among the thousands of people to rally out the front of Parliament House on Tuesday, calling on the government to take action on climate change.

The crowd was addressed by a number of politicians, before they encircled Parliament House in a mass-peaceful protest.

Graeme and Bronnie Mason grow wheat and barley at their property in Ungarie, in the NSW Central West region.

They travelled to the rally flying the Farmers For Climate Action flag, and said they've already starting to feel the effects of climate change.

"We've had three failed crops in a row - that's unheard of for my region in the 40 years I've been farming there," Mr Mason said.

"We might have a two fail and one good one, but not three failed in a row.

"I'm not saying it is 100 per cent caused by climate change, but it's got to have some effect."

Mr Mason said farmers were "on the front line" of climate change and its effects.

"Anything environmental is going to affect us, absolutely," he said.

"If we got up even one or two degrees on average, that makes it so much harder to have soil moisture." FRONT LINE: Graeme and Bronnie Mason travelled from the NSW Central West region to be part of the rally. They've had three failed crops in a row, which is unheard of in the region.

Independent crossbencher Rebekha Sharkie's electorate of Mayo has been devastated by the recent bushfires.

She said many in her electorate, who had never brought up climate change before, now ranked it as their number one issue.

"We all know these bushfires were made so much worse by climate change," Ms Sharkie said.

"My community of farmers is now saying climate change is not just coming, it's here and we see it on our property.

"If we can have my conservative rural community recognise and accept the science of climate change, then we need to make sure every person in [Parliament House] does too."

Fellow independent MP Zali Steggall talked about the bill for climate change action she will introduce in March.

"[The bill] will try to break the political impasse, but it needs to have public support, " Ms Steggall said.

"The public needs to call on their MPs to support a conscious vote. We need to elevate the issue of climate policy and legislation to be a moral issue."

The key aspect of the bill is to "lock in a long-term goal" of net-zero carbon emissions.

"We're trying to put in a sensible plan. Five-year emission reduction budget periods, so it can be done gradually and fiscally responsibly, making sure we have jobs and transition at the forefront for communities," Ms Steggall said.

Labor climate change spokesperson Mark Butler said as "distressing and destructive" as this summer had been, it "should have come as no surprise".

"Our leading scientists for years have been warning of a steady increase in the forest fire danger index, that has been tracking increases in average temperatures," Mr Butler said.

"The climate emergency is now undeniable."

Newly minted Greens leader Adam Bandt, who was voted to the position just hours before the rally, told the crowd he would push the government to declare a climate emergency.

No one from the Nationals or Liberals addressed the crowd.