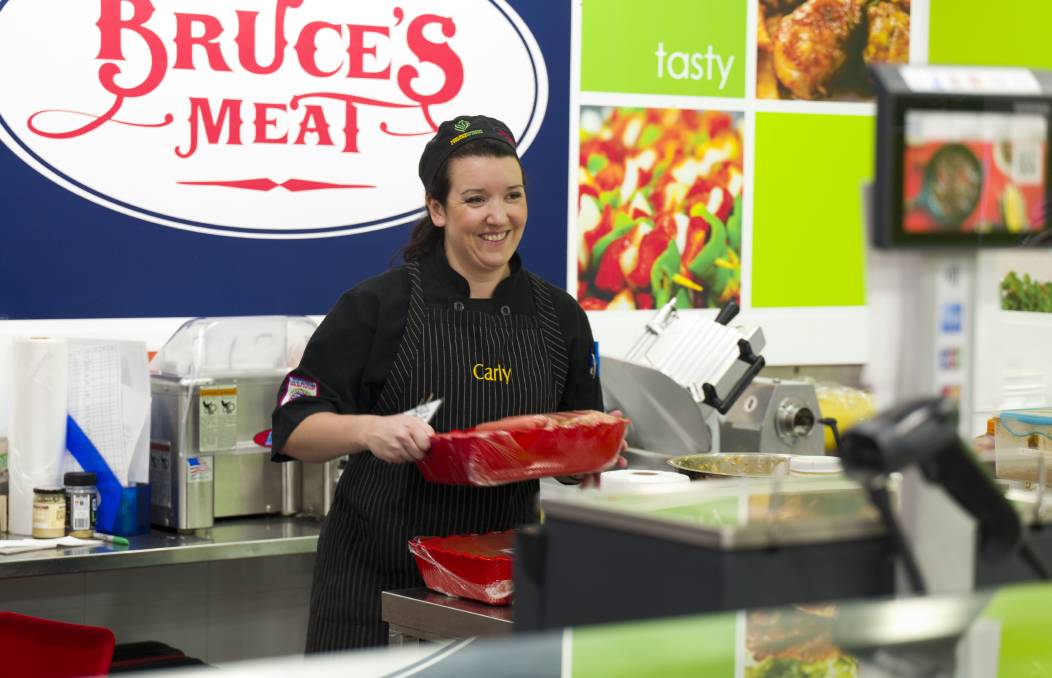 As butchers report they are now mincing higher value cuts like rump to keep up with astronomical demand, marketing experts and psychologists suggest empty red meat supermarket shelves are likely to be around for months.

It's not that Australia will run out of beef. Export and food service orders are already being diverted to retail cabinets.

Rather, the unfolding dynamics of consumer behaviour amid the virus crisis indicates the inclination to fill freezers won't fade.

Logistically, only so much mince can be made, transported and shelved in a day and at the moment that amount is not keeping up with the kilograms people want.

Red meat was the first fresh food to be pulled into the panic buying juggernaut.

He said it wasn't so much massive orders for mince but the sheer volume of people ordering 'just a little bit more'.

"In the first three hours of trade this week we sold the equivalent of our regular week's amount of mince," he said.

"The typical order is for two kilos - one for tonight's dinner and one to put in the freezer.

"The centralised production supermarkets operate under means logistically they can't ramp up their supply quickly but butchers can - we just walk over the fridge and go let's put that through the mincer now." BACK ON THE JOB: John Madden had to interrupt retirement to help son Steve serve up the mince in his Queensland butcher shop.

Gold Coast butcher John Madden retired two years ago but got called in this week to help in his son Steve's shop - and has worked 45 hours in the past three days.

Their little Elanora shop has gone from a typical daily trade of 25kg of mince to 280kg.

"We've been able to source extra supply that was headed the way of clubs and pubs," Steve Madden said.

"The biggest problem is finding the time to break down carcases and make the mince."

Indeed, at Bruce's Meats there has been no chicken satay all week because there's been no time to make it.

Mr Hill said everything in the red meat category was selling at greater volumes but not to the extremes of mince.

The health benefits of red meat, combined with the fact people are thinking their income may be significantly reduced in the near future and mince is exceptional nutritional value for money, is believed to be the big reasons spurring demand.

Sensible-thinking people experience not being able to source what they need a number of times and so when they do have the opportunity, they buy just a big extra, he explained.

For that reason, combined with the fact red meat processing was a business that could not be switched on and off in a flick, the situation of mince demand outdoing supply would probably hang around for some time, he said.

"There is no issue with long-term red meat supply in Australia, nor is the high demand likely to push prices up" he said.

"We export 70 per cent of what we produce so there is plenty to redirect to the domestic market. The restaurant trade, both here and overseas, is slowing dramatically."

The big drop in the Australian dollar that would typically drive global demand was likely being more than offset by the lack of people out dining overseas, he said.

"It's also very hard to get shipment containers even if you have orders - that is certainly being felt in fruit and vege now and I suspect beef," Dr McKinna said.

One of the longer-lasting effects of the current situation could well be increased custom driven back to independent butchers, he said.

As people see the value of a 'regular customer' relationship with their butcher, and the fact these smaller, more agile stores are better able to respond to increase demand, they may decide to stick with their new mince supplier.

Mr Hill said butchers had passed out their phone numbers to their more vulnerable customers, offering to deliver if they are in lock-down.

He believes demand will run at a 30pc increase at least for some time.

"Even when the freezers are full, people will be eating at home more," he said.

Both processors and cattle producers say extensive measures are being put in place to ensure red meat continues to come down the pipeline in the face of the coronavirus threat.

The country's largest meat processor, JBS Australia, says it is has a team of both internal and external stakeholders, including medical professionals, working together to provide advice and guidance to the business.

Head of corporate and regulatory affairs John Berry said JBS intended to continue to operate its facilities, with the top priority being the implementation of proactive controls and processes to reduce the likelihood of the virus entering and/or spreading within facilities.

"We are monitoring the evolving coronavirus situation and will continue to follow the guidelines and recommendations of the government, public health officials, and leading experts," he said.

Peak producer bodyCattle Council of Australia says there are about as many cattle in Australia as people, so Australia won't run out of beef anytime soon.

"We have the capacity to supply high-quality and nutritious red meat to all our customers both at home and overseas.

"Australia produces around 2.3 million tonnes of beef and veal per year and 27 per cent of it is sold at home.

"We have world-class biosecurity standards and practices to make sure consumers can depend on Australian beef."