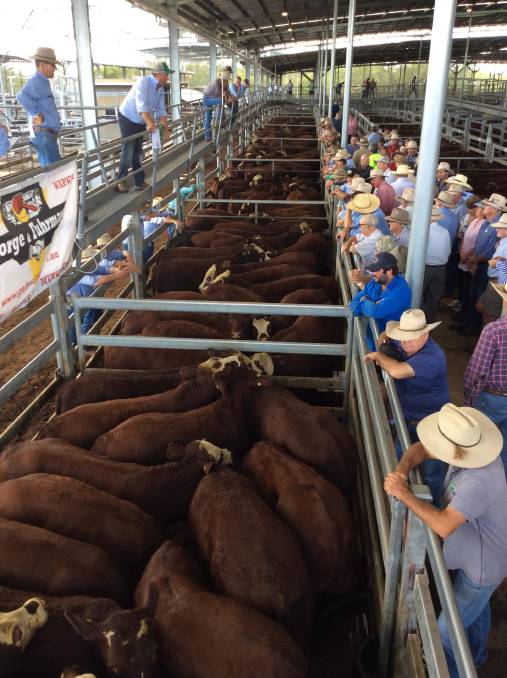 UNCERTAINTY around lockdowns, supply chains and market volatility is largely fueling the rush on cattle at saleyards that has seen young cattle prices make a sharp u-turn in the past week.

For what is perhaps the first time ever, producers appear to be driven more by a form of uncertainty not related to the weather.

Agents and analysts say it's not panic selling but the desire to cash in now to mitigate potential risk of reduced buyer competition or logistical hurdles has definitely brought cattle forward.

The Eastern Young Cattle Indicator has dropped to 717.75 cents per kilogram carcase weight, down from the hefty heights in excess of 750c two weeks ago but still more than 250c above where it was this time last year.

Meat & Livestock Australia senior analyst Adam Cheetham said the market was still at an historical high level and that had encouraged selling in the face of a lot of unknowns about what is to come in the next few weeks and months as the coronavirus situation unfolds.

Given the fact the cattle market had gone into record territory very fast following widespread rain and was sitting at what most analysts and agents considered to be an unsustainable level, it's not surprising the supply-driven decline in prices has also been fairly fast and heavy.

There were other factors also driving the big jump in yardings both week-on-week and compared to this time last year, agents and analysts said.

In Queensland, there was a lot more cattle coming from north now where this time last year that supply was impacted by flood, Mr Cheetham said.

Cattle held up due to wet conditions have also made their way to market in the past week.

In the south, cattle held over from January sales because vendors were not going to accept the rate at the time were now being marketed, said Mt Gambier agent Andrew Whan, Miller Whan & John.

Some southern yards had sold twice the numbers at sales over the past week that would be typical for March, he said.

The lack of northern competition was somewhat absorbed by local interest on the back of a reasonably good season but prices had generally dipped 10 to 15c, he said.

"The south had good January rain which set things up until March but we're now waiting on an autumn break," Mr Whan said.

"However, uncertainty around shutdowns and border restrictions is stronger than weather concerns at the moment."

"There is no mass panic but everyone is unsure and decisions are really a day-by-day thing at the moment," he said.

Processor grids across the board have eased by at least 20c/kg, some as much as 40c, which is largely a reflection of concern about the ability to sell into global markets.

However, it may be the case that processors don't turn things down as is typical over the Easter break.

Mecardo analyst Matt Dalgleish said given the aggressive red meat buying in Australia, where product can be sent domestically at a margin processors would likely look to do so for as long as possible ahead of the depths of winter and its expected extreme supply constraints.

On the other hand, feedlot demand is now likely to soften with last week's Australian dollar decline pushing domestic grain prices from $300/t to 350/t.

The global rally in the price of wheat has now pushed that closer to $380/t, Mr Dalgleish said.

"Feedlots were not expecting that and combined with a softening of finished cattle prices, it will lessen their appetite for cattle," he said.

ALSO SEE: Butchers run off their feet, and it's not expected to ease