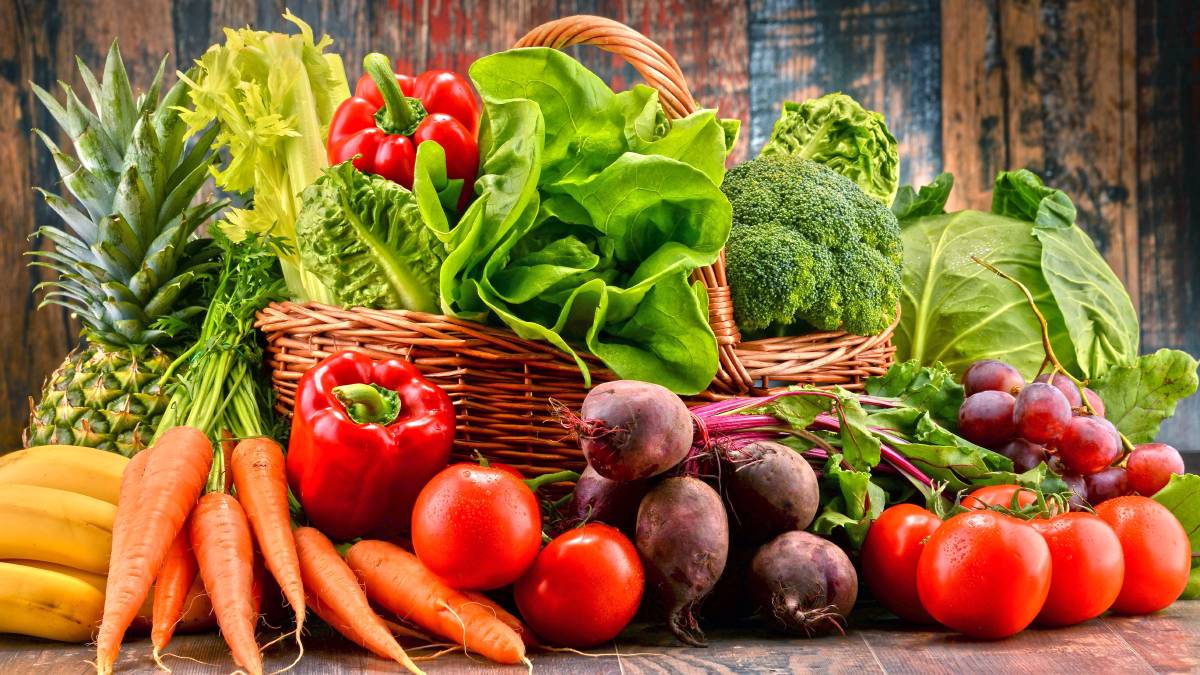 Australian agriculture is loosing $1.1 billion to $2b a year in food waste.

THIRTY ONE per cent of produce is being wasted before it even gets off farm - that's lost income for farmers and lost product for supermarket shelves.

But the $1.1 billion to $2b wastage doesn't have to be this way - there are gains that can be made to boost farmers' returns per hectare which will in-turn boost the product hitting supermarkets and reduce waste.

In these times of high-demand as people panic-buy on the back of the COVID-19 pandemic, some of the solutions are already coming into play by necessity, in what is possibly the only silver lining to come out of the coronavirus pandemic, says Food Innovation Australia Limited special adviser Mark Barthel, one of the voices behind the Roadmap for reducing Australia's food waste by half by 2030.

As product has started walking off the shelves, consumers and the supermarkets are being less picky about the size and shape of fresh food, and that's a good thing for the farmer and for reducing food waste.

"This is the only silver lining to come out of this whole thing, for the food chain anyway. We've seen this relaxation and as a result we've seen consumers accept food at a quality and shape and size that they might not ordinarily do," Mr Barthel said.

"To me that is brilliant because crop utilisation has significantly improved.

"It's not just the class A or grade A product that's coming out of the ground and being able to sell to market, pretty much you can sell every grade now, based on the desperate need for food, particularly fresh food.

"There is plenty of food in Australia if we maintain our normal buying habits, but that's not happening right now."

Mr Barthel said he'd like for whole crop harvesting and selling to continue, post the current high demand, and said it was something he'd worked on previously in Europe where they were able to increase crop utilisation by around 25 per cent.

There he worked with a supermarket which owned most of the supply chain and changed the size of potatoes that were acceptable in retail. The varieties grown were also looked at, to find which gave the best yield, not just in paddock, but on the retail shelf.

"We discovered King Edward potatoes had a 5pc less wastage rate because they were less susceptible to rooting and greening."

This meant more of it hit the shelf at retail level or was usable for food service outlets.

The work also discovered the optimum potato circumference had been set at 45 millimetres for supermarkets, so long ago nobody could remember why.

"We reduced that from 45mm to 43mm, nobody noticed, no consumer is going to notice a change in 2mm in the circumference of their potato, but the farmer noticed because crop utilisation went up by 5pc, which meant $2000 a hectare more income."

They kept reducing the acceptable size until it was noticed by the consumer and there was push back, but in doing so they increased crop utilisation by 15pc per hectare.

They also looked into refrigeration on-farm and found that using the best performing units could save farmers thousands of dollars and millions of kilowatts a year.

"In this value chain we calculated, in the end, that for every 50,000 tonnes of potatoes that were produced we were saving the whole value chain $1.2 million per year," Mr Barthel said. 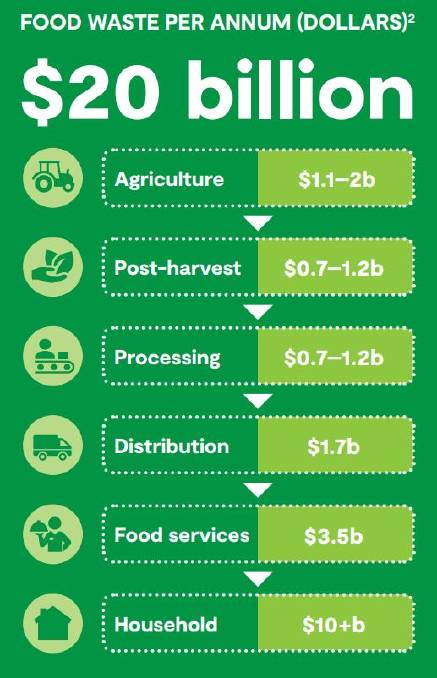 Agriculture is loosing $1.1 billion to $2b a year in food waste, according to the Roadmap which FIAL was contracted to prepare andused data from Arcadis' National Food Waste Baseline.

Arcadis found there was 2.27 million tonnes of food which was not harvested or was ploughed back in, and Mr Barthel said more than a year on he was still trying to understand that issue.

He said some was because a crop wasn't economical to harvest, and so it was ploughed back in for organic matter, while some of the losses were due to external factors such as flood and drought.

But Mr Barthel, who has worked with 16 different countries across the globe on their food waste issues, expects that dollar figure to rise with further research into the issue.

How big is the problem?

Generally household waste was where most food wastage occurred, but in Australia, wastage was spread across the whole chain.

"There is around 7.3 million tonnes of food wasted each year in Australia which is somewhere between a $20b and $25b problem each year, so that's not small beer," Mr Barthel said. 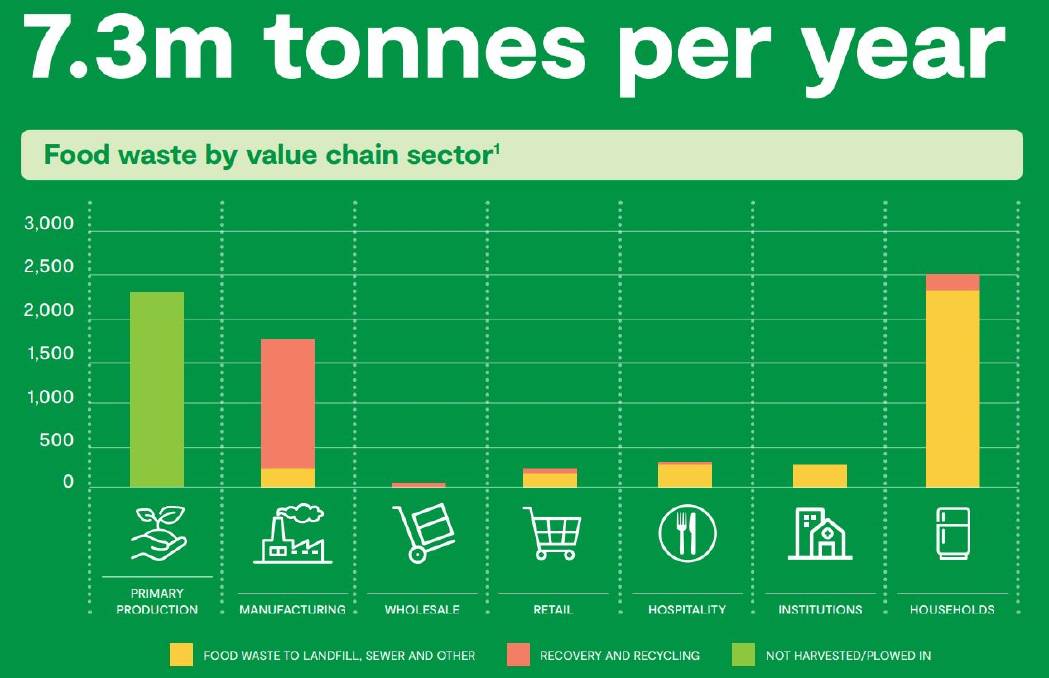 "So in thinking of where we wanted to go in this Roadmap ... we have to take a whole chain approach as food waste is everywhere."

The biggest losses were in fresh produce, with about 25pc of fresh produce entering the cold chain being wasted.

Meat and seafood was around a 3.5pc to 6pc loss, while dairy was strong at just 1pc.

Mr Barthel said some of the food wastage came down to cold storage on-farm not reducing the core temperature of produce to the right level, so the food would spoil on long journeys.

"If produce is going on a truck and the core temperature is not reduced sufficiently that's going to stay that way and so you lose shelf life and quality and lose food over the duration of those trips, and we know some of those trips are huge.

"To get mangoes from North Queensland to Melbourne is a 3400 kilometres journey, so there is the tyranny of distance playing out here.

"There's never a silver bullet in primary production... it's a combination of things that you can do which lead to big savings."

A concept, loosely called food transformation hubs, could see places established close to production zones designed to extend the shelf life of food through measures such as providing proper cold storage, and opening up options for freezing the meat.

Fresh produce could also be processed at these hubs into dehydrated or pelleted foods when gluts were experienced.

More inventive solutions could also be looked at, similar to those that have been done previously. For example, tomatoes which are high in antioxidants are perfect natural ingredients for skincare and health care products. But also those antioxidants can be converted into bio materials.

Previously, H.J Heinz and Ford Motor Company have combined to turn the waste tomato skins from Heinz's soups and ketchup into plastics for Ford cars.

"There is are all sorts of things you can do with what we'd normally call waste streams. They are actually a really powerful resource to create and unlock new value for primary producers and others."