Longreach shearing contractor Raelene Bowden has isolated herself and her team of 15 as her way of managing the new protocols brought in to manage the spread of COVID-19 in the shearing industry. 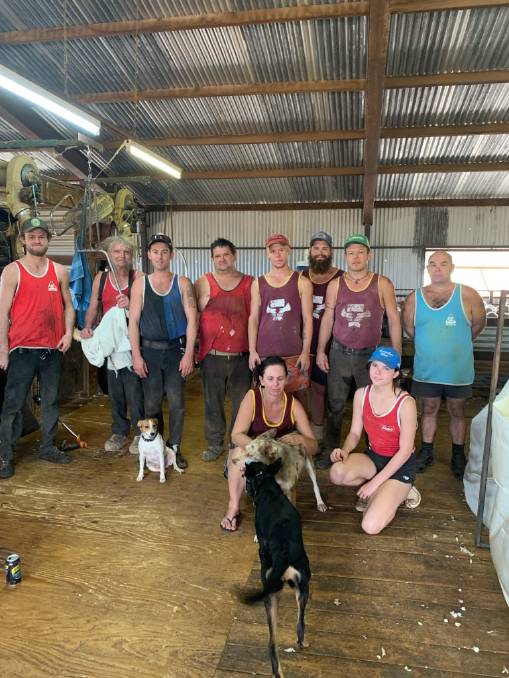 Longreach shearing contractor Raelene Bowden has isolated herself and her team of 15 as her way of managing the new protocols brought in to manage the spread of COVID-19 in the shearing industry.

There are many other guidelines for maintaining distance but Ms Bowden's team has decided as a group that they are going to stay together in isolation for as long as needed.

Speaking from Waroona, north of Stonehenge, where they are shearing 12,500 sheep, Ms Bowden said they had been in their own form of lockdown since Monday last week.

"The boys and town is a no-go now," she said. "They're all in good spirits even though they're craving town life but I've explained, town life isn't what it was."

She has put her own protocols in place surrounding the way food is brought in, after speaking with the Shearing Contractors Association of Australia.

Cartons will be loaded on her vehicle tray by supermarket staff and she will drive away before getting out to tie them down, and if a worker gets sick or hurt, they will have to spend 14 days in self-isolation before they rejoin the team.

She said there was enough work within a 250 kilometre radius of Longreach to keep the team employed for 12 months.

This means no agents can visit the shed, no wool truck drivers can come inside, and while graziers can bring sheep up to the shed and backline shorn sheep, they can't have contact with the team.

Implementing these rules means the protocols around observing a 1.5m distance won't have to be observed, but each person in the team has been issued with a personal cake of soap in any case, and has their own room where possible in quarters.

It's a far cry from sheds nearby a week earlier that were shearing Egelabra's commercial ewes on agistment under a normal operating environment.

Ms Bowden said the team was fully on board with the plan because all just wanted to keep doing their job without interruption and this mapped out a plan for months.

Graziers have all been consulted and on properties with no quarters, alternative dwellings have been sourced on neighbouring places.

"We don't need to put our fate in someone else's hands," Ms Bowden said.

"I want to protect myself, my husband, my team, my mother and father in their seventies, and the industry.

"If anything is going to stimulate the economy during this, it's our industry.

"If we can do this properly, we can help with that."

The story Shearing in isolation the way ahead for Raelene's team first appeared on Queensland Country Life.