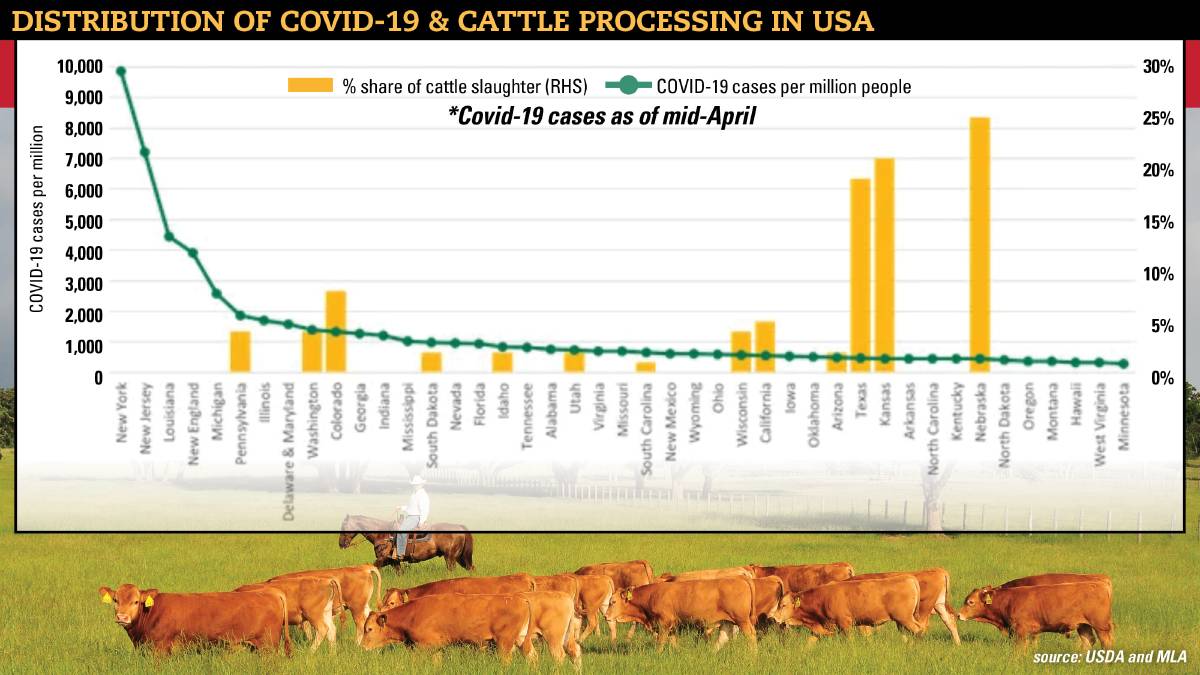 COVID-19 to cost US cow calf producers in excess of $4b.

UNITED states cattle markets are tumbling on the uncertainty of COVID-19, with a growing number of processor shutdowns and scalebacks due to infections.

How that will play out for cattle prices and exporter profitability at home could be a mixed bag, given the US is both a key competitor and customer for Australian beef.

However, leading analysts are certainly warning restockers currently riding a high on the back of good feed stores and a great seasonal outlook to be cautious.

US-based economic consultants Steiner estimates fed cattle slaughter in the US is back more than 20 per cent on where it was at the start of April and 18pc below year-ago levels.

That has further pushed already declining livestock prices in the US back by as much as 20pc in the past three weeks, Australian analysts said.

Mecardo reports that since the start of the year, US lives cattle futures have declined 30pc to under US190 cents per kilogram.

Based on an Australian dollar of 63.5 US cents, heavy steers could move towards AU275c/kg liveweight, compared to the 325-350c range forecast only a month ago.

Positive COVID-19 cases in beef plants in Colorado, Michigan, Iowa and Wisconsin have forced closures while many other operations are reducing throughput due to slowed chains as social distancing and increased sanitation measures are put in place.

US-based analysts for Australian agribusiness operations have provided feedback that the outbreaks have had a secondary effect in creating employee hesitation to come to work at plants, further reducing processing capability.

The US Cattlemen's Association has just released an economic impact report of the COVID-19 pandemic on their industry, which puts the cost at a whopping $14.6 billion costs.

The reports says the cow/calf sector will be affected to the tune of $4.4b and backgrounders $5.5b.

Rabobank senior analyst Angus Gidley-Baird said the impacts in the US - as with all other beef-producing countries - have been complex.

"On the one hand, the restaurant trade has been decimated but then there is the increased retail trade as people eat in their homes more," he said.

"Within the beef carcase, the middle meat - rib and loin cuts - typically go to restaurants so we have seen a dramatic drop in prices of those.

"But chuck and round have seen a large spike in prices. Chuck prices in the US have doubled in past month and they are typically very steady prices.

"Those shifts affect the overall cut-out value. There is a margin for processors if they are able to operate well under the new dynamics but it's certainly a day-to-day, case-by-case situation at the moment."

All analysts agree it's impossible to predict whether the processor shutdowns in the US are just the tip of the iceberg.

However, they did point out it was looking more and more the case that the measures implemented in Australia have potentially averted the same catastrophe occurring here.

MLA analysts said so far key cattle processing states in the US had been less affected by the virus.

They believe a sustained substantial slowdown in US processing would be unlikely, saying the decline in livestock prices provides US packers with greater incentive to find workarounds to managing labour forces.

Even if the slowdown was ongoing, that would pose limited opportunity for Australian beef to fill a gap, MLA analysts said.

This is because Australia exports predominantly grassfed manufacturing beef and chilled grassfed primals which target specific channels in the US - not the cornfed beef the majority of US retail is geared to.

Mr Gidley-Baird said theoretically, a hold-up at plants combined with strong retail demand for beef would mean alternative suppliers such as Australia might be an option.

"But more of our trade goes into food service so Australia's ability to fill the gap is not straightforward," he said.

"The processor disruptions are also happening in Canada, and they will therefore limit the amount of trimmings being sent to US, which again could mean more demand for Australian product."

And less US product flowing into key Australian export markets such as Japan and South Korea might alleviate higher livestock prices at home.

The other side of that, of course, is Australian beef production is expected to drop to some of the lowest volumes seen in 15 years as the herd rebuilds; so what is available to global markets will be limited.

ALSO IN BEEF: Herd rebuild back on the agenda