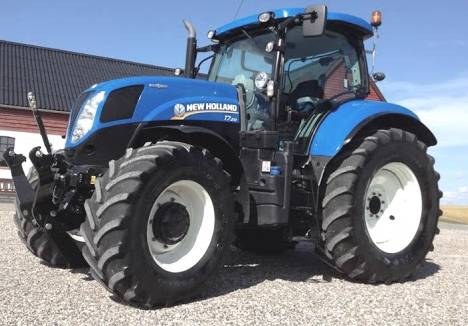 Eight New Holland T7 210 tractors, like this one in a file photo, were stolen from a dealership in the UK.

Tractors are not normally associated with stealthy getaways but a gang of crooks in Oxfordshire has got away with eight New Hollands.

A TEAM of thieves made the opposite of a speedy getaway during a robbery in the United Kingdom where eight tractors worth over $A900,000 were stolen.

Although not an easy item to discreetly steal, the rogues got away with their heist, with British agricultural newspaper Farmers Weekly reporting that eight New Holland tractors worth almost £500,000 were taken from a farm machinery dealership in the small village of Cassington, north-west of Oxford in the heart of one of England's major cropping regions.

English authorities believe the machines are likely to be moved out of the country, either on low loaders or curtain sided trailers as they are too large for conventional transport means such as shipping containers.

Farm machinery theft of this scale is uncommon because of the difficulties in transporting the bulky and slow equipment.

In Australia the majority of farm machinery thefts are opportunistic crimes taking an individual item from isolated farms.