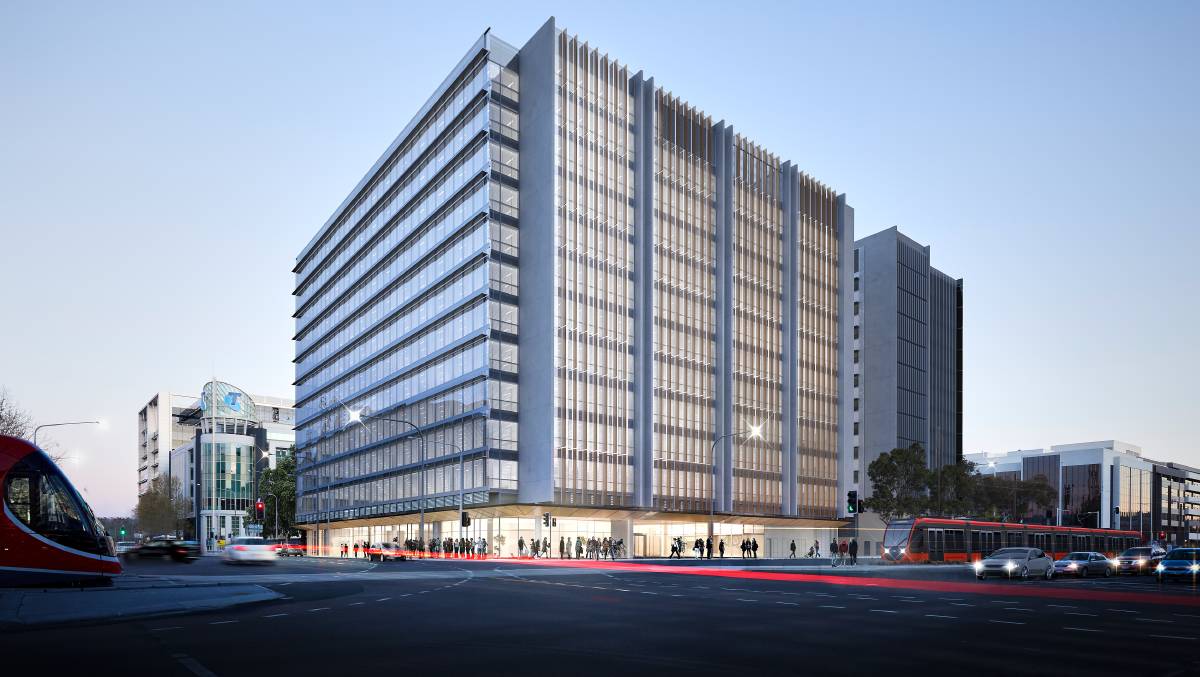 An artist's impression of Civic Quarter 2, a new building planned for the corner of Northbourne Avenue and Cooyong Street. Picture: Amalgamated Property Group

One of Canberra's major public service employers plans to move staff to a new, 12-storey building in the city centre.

The Agriculture Department would move staff to a new 12-storey office building in Canberra's city centre under a plan costing $78 million in fitouts.

Public servants working in the department's offices on Marcus Clarke Street and London Circuit in Civic, and Mort Street in Braddon, would relocate to a planned new building on the corner of Northbourne Avenue and Cooyong Street.

The department also said it considered relocating from Canberra to a regional centre as it looked for new office space, but decided against the move.

Property developer Amalgamated Property Group has the ACT government's development approval to build on the Northbourne Avenue site, which the company bought from Walker Corporation for $34 million in 2016.

The new building, Civic Quarter 2, would give the Department of Agriculture, Water and the Environment 32,700 square metres in office space fitting 2,750 staff under a 15-year lease.

CQ2 would stand alongside the newly-constructed Civic Quarter 1 building that fronts Veterans Park in the city centre.

Agriculture Department staff would move into CQ2 shortly after its scheduled construction finish date in July 2022.

The department told a parliamentary committee in a submission this week it would share with Amalgamated Property Group the $78 million cost of office fitouts it would need at CQ2.

It said the relocation would not affect its lease in the parliamentary triangle's John Gorton Building, signed by the Environment Department before it merged with Agriculture in February. The Department of Agriculture, Water and the Environment will continue its lease in the John Gorton Building. Picture: Dion Georgopoulos

However the merger "may impact on the occupancy profile for the building" at CQ2, the Agriculture Department said.

"The department will rationalise the location of business units based on business needs," the submission said.

It also said the new workplace design at CQ2 would give it more flexibility to accommodate staff number fluctuations and re-organisations such as those in the recent machinery of government changes.

Agriculture Department staff at Mort Street in Braddon, where its office lease expires in June, will first relocate to its Marcus Clarke Street and London Circuit offices.

The department told MPs its two leases in Civic would expire in October 2022 and the offices were reaching the end of their "economic life".

It wants a greater density of workpoints in its offices than is possible in the Marcus Clarke Street and London Circuit buildings, designed for an average of 16 square metres per person.

The offices would need a fitout of all floors in addition to a refurbishment, a project taking two years and posing "significant" disruption for staff, the Agriculture Department said.

Both buildings also require upgrades to lifts and air conditioning, while the demolition of a redundant computer facility at the Marcus Clarke Street offices would impose a "prohibitive" cost, it said.

Moving to a newly-built CQ2 would avoid disruption and was better value for money, the department said. The Finance Department also found the option offered the greatest economic benefit.

The Agriculture Department considered relocating from Canberra to a regional centre, among other options. As the government tries to move public servants to the regions, it wants agencies to consider moving to the bush as their leases expire.

However the department found the office space it needed would not be readily available.

It estimated most of its 2750 public servants would not move to a regional city, possibly requiring it to hire up to 2000 new staff.

Departmental officials also needed regular face-to-face contact with the government and other major public service departments based in Canberra, the submission said.

"The economic cost of a development and relocation to a regional centre would be equal to or higher than Canberra," it said.

CQ2 would let the department average 12 square metres per person in workpoint density, more dense that the standard required of government agencies.

The density would be even greater when the department introduced "activity-based working".

The works will include upgrades along Mort Street that Amalgamated Property Group said would create a "high quality, pedestrian-focused public realm" with new seating areas and retaining its mature elm trees.

The building will have basement parking for 172 vehicles, parking for 200 bicycles, a ground floor cafe and retail, and 11 floors of office space. A central atrium will extend from ground to roof level.

The fitout and relocation need approval from the House of Representatives, which will receive a report from the parliamentary works committee on the plans.

CQ1 has attracted Westpac and St George banks as tenants. Construction for CQ2 is expected to begin in the third quarter of 2020.

Amalgamated Property Group is known in the ACT partly for building the Louisa Lawson Building in Tuggeranong, which houses Services Australia.