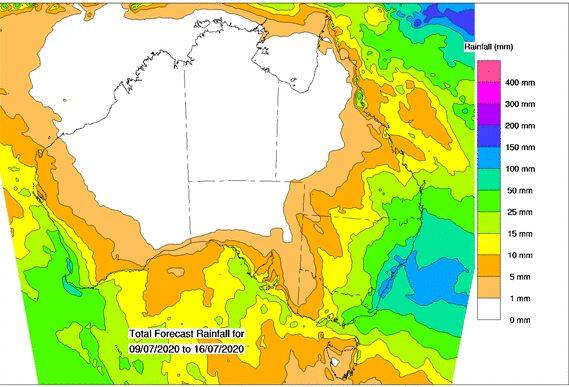 The Bureau of Meteorology's eight-day forecast paints a nice picture for farmers across much of the country.

NSW is the headline act but many parts of eastern Australia can expect good rain in the next eight days with two fronts sweeping through.

AFTER agonising years where farmers across the state could not buy a rain, the tables appear to have turned in NSW.

The eight-day outlook for the state is full of promise, with rain associated with the fronts set to deliver beneficial totals to parts of Victoria and Queensland as well.

Firstly, over the weekend moisture will build through inland regions, with the best totals likely in the northern part of the Central West, Victoria's north-east and Queensland's Western Downs, with falls of up to 25mm possible.

Later on, from Monday onwards, an east coast low is set to develop.

This system is set to deliver the heaviest rainfall, with the Bureau of Meteorology (BOM) eight day outlook predicting cumulative totals in excess of 100mm for parts of the Central and South Coasts.

The Australian Weather News (AWN) ensemble forecast is predicting up to 60mm on Monday alone in Moruya, while heavy rain is also expected to push through East Gippsland in Victoria.

In Queensland, the south-east of the state, including the eastern Darling Downs, is expected to fare best, with up to 25mm.

Meanwhile, at the furthest end of the short-term outlook, Western Australian farmers are watching with interest a system that could deliver up to 25mm, with the heaviest falls expected in the far south-west of the state next Thursday.

However, it remains stubbornly dry across South Australia and western Victoria.

While low evaporation rates and light showers are keeping things fresh, farmers are looking for a solid rain to consolidate the strong position generated by the good autumn break.

Further out, there is still good grounds for hope for the rest of the growing season.

Despite promises of a wet winter failing to deliver as yet, the BOM long term outlooks are for a wetter than average August to October period.

Again, the outlook makes great reading for NSW farmers, with the best odds of exceeding median rainfall through much of the western two-thirds of the state.

Southern Queensland and northern SA are also tipped to have a wet early spring, with the outlook more neutral through southern parts of SA, Victoria and Western Australia.

In terms of long term weather influences, the Bureau this week issued its Climate Drivers Update.

It has continued to have a La Nina watch in place, meaning a La Nina is a 50 per cent chance to occur, double the normal likelihood.

La Nina event are associated with wetter than average weather patterns through much of Australia.

The reason for the increased chance of a La Nina is the cooling of surface and sub-surface waters in the tropical Pacific Ocean, with other drivers remaining at neutral levels.

In the Indian Ocean, three of the six models used by the BOM are forecasting an Indian Ocean Dipole (IOD) negative event to form, correlated with wetter conditions in Australia.