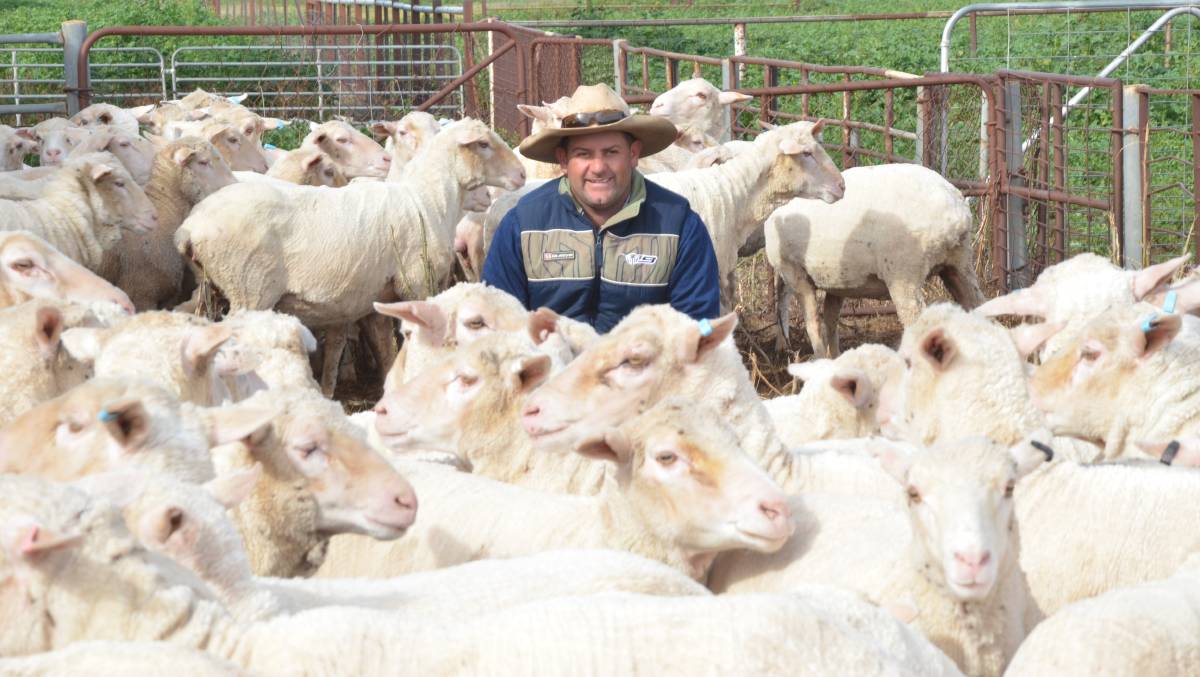 Peter Andrews said looking back it was a struggle to defer joining for a year, but it was the right decision. Photo by Mark Griggs.

A bold move to defer joining ewes for a year has proved to be the right decision for flock rebuild.

A bold move to help rebuild their depleted flock by Nevertire sheep producers Peter and Lyndall Andrews is paying off.

Mr Andrews has seen his self-replacing Merino flock at Tabratong diminish from 4800 to 1500 due to the full force of the recent drought conditions.

Ideally, to increase their numbers at a faster pace, Mr Andrews said they'd like to buy more ewes in, but he knew it was going to be "physically impossible at $300 per head".

Instead they chose an incredibly brave, but smart move, and opted out of joining any of their ewes last year.

They went the entire year with no income except for part of their wool clip.

The Andrews made the decision after seeing the debilitating results of other sheep producers in the area who had joined, scanned at 90 per cent, but by the time of lamb marking they were down to 30pc.

"Once they had weaned they were down to as low as 15 to 20pc. On top of that they had also lost a number of ewes," Mr Andrews said.

"We decided that every animal we had, we had to keep alive.

We decided that every animal we had, we had to keep alive - Peter Andrews, Nevertire

"So rather than try and join and lose a ewe or a ewe and a lamb, we figured it was easier to keep the ewes in a steady condition rather than put that stress on them.

"We waited until this year and as soon as the season changed we joined everything we possibly could that we thought would be in the right condition."

Working closely with a nutritionist and a Bayer representative, they made sure their ewes were at their optimal condition score.

Mr Andrews said it was a bit of extra work, but it has paid off.

"For the first time in eight years, we scanned at 133pc in lamb," Mr Andrews said.

"We are hoping by having such good results, we can get them through to weaning.

"Even worst case scenario, if we lost 30pc we are still guaranteed 100pc, but I am hoping we lose maximum 10pc from the time being born until weaning."

To help replace their numbers as rapidly as possible, they retained everything they'd normally sell.

"Everything that was dry, or wan't quite in the right condition, we were going to put them on the truck, but we have since decided that we'd rejoin," Mr Andrews said.

"We are now going to have two lots of lambing, which will take a bit to get them all back into sync and have them all as the one joining, but every ewe lamb on the ground is a bonus."

Their aim is in three years time to be back up to around 3000 head again, if not a little bit more.

Mr Andrews said looking back on it now, as big a struggle it was because other then wool, lambs are their main income, it was the right decision.

"We are still here now and we have our heads above water," he said.

"We didn't have to worry about ewes going backwards in condition because they aborted lambs or were trying to raise a lamb and become skin and bone.

"I think giving the ewes a break may have helped and may have been the reason we had such good scanning results.

"Hopefully it has paid off and when we start lambing down in mid-August we have lambs everywhere. It will be full steam ahead."

Non-mulesed sheep ready for the future

Since targeting a plainer bodied sheep, the Andrews haven't mulesed their Kerin Poll bloodline flock since 2016.

"I won't rule out that we will never mules again, but we had to be realistic and look at the future," Mr Andrews said.

"Being in drought knocks them about too, so because they were doing it tough, we decided not to mules.

"If it does end up getting banned, whether that happens in the next 10 to 20 years, we thought if we make a change now, at least when it comes in, we are already there, so to speak."

He said last year they found their wool was in demand because it was un-mulesed.

"It has made a difference when it comes to selling the wool, with more buyers interested," Mr Andrews said.