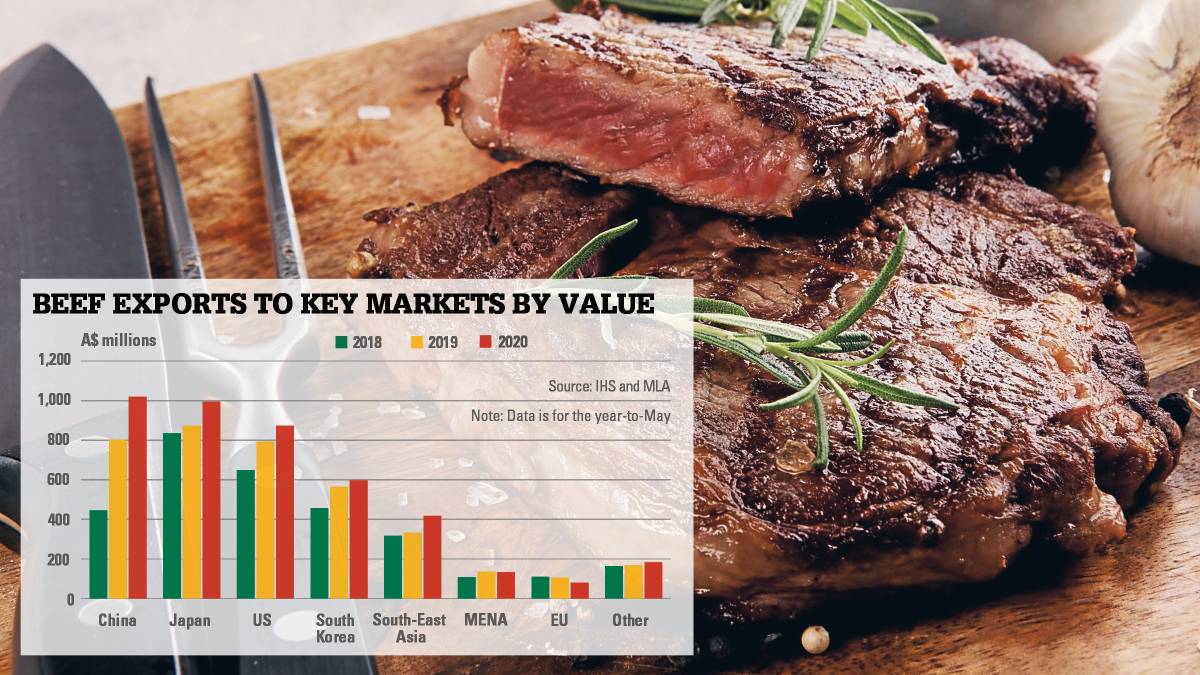 JAPAN is proving a solid rock for Australian beef exports during pandemic volatility and with restaurants there now back to 75 per cent of normal traffic, the outlook is strong.

The latest Australian Government beef trade figures show exports to Japan were up 58 per cent in June on the previous month - which was exceptionally low due to pandemic impacts - but analysts say the rebound has been a shining light in Australia's export port folio.

And despite volumes being down 2pc for the first six months of this year, beef export values to Japan have held - some months they have been slightly higher.

For two decades, Japan has consistently featured in the top few spots as largest export destination for Australian beef and analysts say our product has maintained its favourable reputation and a place in both retail and foodservice channels during the turmoil of 2020.

Increases in delivery and take-out had also contributed.

Mr Walker said 62pc of beef consumed in Japan was imported and well-established relationships and a strong network of customers for Australian beef had paid dividends this year.

Oversupply of certain cuts was an issue when COVID first hit as demand for certain items skyrocketed at the expense of others. Importing of tenderloin to Japan, for example, doubled.

Similar carcase utilisation issues have been faced in many of Australia's beef markets through the changing consumer demand dynamics of lockdowns.

Life had largely gone back to normal in Japan but there was still nervousness about a second wave, Mr Walker said.

Alongside COVID, which is expected to have continued and evolving implications in all of Australia's beef export markets for years, changing demographics in Japan is also likely to be a challenge.

Japan's population is decreasing and Japanese people have the longest lifespan in the world - as societies age, there is a general decrease in consumption of beef.

However, Mr Walker reported inbound tourism would likely step in to fill that gap and pre-COVID it was booming in Japan.

Despite the volatility the coronavirus is inflicting on Australia's key red meat markets, beef exports have performed well through 2020 so far, back just 3pc on 2019 levels, reaching 550,000 tonnes shipped weight for the year-to-June, according to MLA.

MLA's July update of cattle projections included an upward revision to beef exports, with shipments now expected to exceed one million tonnes for the year, which would put it at a 17pc decline on 2019 levels.

The July update said key drivers of the revision were enduring international demand for safe, quality beef, bolstered by a general lift in the sale of beef through most retail channels, ongoing protein shortage caused by African swine fever and US supply disruptions.

South Korea is another market that has been stable in volatile circumstances, with year-to-June exports back just 4pc on 2019 levels and value up on the May figure.

ALSO READ: How one beef brand has defied COVID