FEED ON HAND: Matthew Martin, who manages the sheep and cattle operation Old Cobran Pastoral in southern NSW, where containment feeding has help deliver exceptional volumes of feed this year.

CONTAINMENT feeding has taken off like wildfire in the past few years as producers whose grazing country was severely hit by drought looked to maintain turn-off to capitalise on growing global red meat demand.

Innovation has come fast and thick and methods, gear and systems trialed, with plenty of lessons now emerging.

One of the main developments has been the realisation that confinement feeding has far more advantages beyond alleviating the effects of drought. It is allowing livestock operations to maintain stocking rates without compromising ground cover through typical annual dry periods, protecting investments in pastures and facilitating far better responses after rain.

Containment lots, or what has become known as stock management areas, are proving year-round and year-in, year-out investments.

The subject led the agenda at the 2020 Graham Centre Livestock Forum on Friday, which for the first time was held online.

The Graham Centre is a research alliance between Charles Sturt University and the NSW Department of Primary Industries.

ALSO READ: Why beef producers should listen to vegan opinions

Martin Preuss, from the Riverina Local Land Services, kicked off proceedings outlining some of the containment feeding best practices that have now been established.

He explained a stock containment area was not a sacrifice paddock, which are costly to bring back into a system. Nor are they a feedlot.

The Environmental Protection Agency considers a feedlot 1000 cattle or 4000 sheep.

A containment area allows for the preservation of topsoil, groundcover and nutrients and provides the opportunity to maintain, if not improve, a core breeder base and perennial pastures during dry times.

Livestock energy needs can be reduced by 10 to 15pc of daily metabolisable energy requirements via containment feeding.

And research has also shown pasture response rates after rain are improved. The downside, of course, is the costs involved in setting up containment feeding areas and ongoing feed costs but there are now some tried-and-proven ways that producers can tap into.

Tighter stocking can actually reduce dust in pens, he said.

"While there is no perfect design, there is a good opportunity to tailor the right design for your property and stock enterprise," Mr Preuss said.

Rectangular shape is typically better for ease of management and things to consider include minimising water contamination, maximising trough allocation and reducing social stresses on stock.

A key consideration should be where silos, hay sheds other infrastructure on the property is.

"You want to have resources available so you don't lose downtime running back and forwards," Mr Preuss said.

Water is one of most important areas to manage, he said.

Sheep can consume between four and 10 litres daily, and cattle 60-100. Pasture supplies a proportion of daily water needs but confinement diets are low in water.

"A big concern as intake demand increases with hot weather is a possible offset effect of water heating up. Once it gets above 28 degrees Celsius, animals will limit water intake," Mr Preuss said.

NSW DPI's Geoff Casburn said shade was an important consideration and there were some cheap ways of providing it.

Shade cloth along a fence line, coming out by a metre or two, placed so as to obtain the most shade in the middle of the day and afternoon, was one way.

Containment pens at sheep and cattle operation Old Cobran Pastoral in southern NSW were originally built to alleviate stress in drought but it was quickly realised they could be utilised year-in year-out.

They paid for themselves in boosted capacity and efficiency through summer and autumn within just a few years.

This year, the operation had the most amount of feed on hand going into winter it has ever seen as a direct result of the practice. The containment areas, which were built on low production areas of the property, are also used as holding paddocks prior to shearing and scanning and as single sire mating pens for stud joining.

Old Cobran shifted from Deniliquin to Mullengranda, south of Holbrook, five years ago and moved into an intensive grazing system.

It today runs 4500 Merino ewes, including 500 poll stud ewes, and 150 Angus beef breeders on 1200 hectares of farming land, with around 600ha of restricted grazing set aside for conservation.

Pen size is important, Mr Martin said, with a minimum of five square metres per head of sheep needed.

The average pen dimension at Old Cobran is 100 by 50m, holding around 400 sheep. This allows every individual animal access to the feed trough.

"We allow a minimum 30cm of single-sided trough space per animal and 20cm for double-sided access," Mr Martin said.

"We began with single-side but have transitioned to double - it's far more economical and has allowed increased pen capacity."

The trough system has worked out at $3.10 per sheep.

Feeding is carried out externally with no entry to the pens required. A modified Bromar feed bin is used with an extendable auger and feed bin scales for accuracy of feed rations. Feeding sheep in the containment lot.

Water is sourced through a solar-powered bore and stored in two 20,000 litre tanks with automatic refilling.

"We also have some pens set up for production feeding lambs - 1500 square metres at 300 lambs per pen and we put three lick feeders per pen.

"All lambs are introduced via containment pens to allow safe introduction of grain."

The key points from what Old Cobran has learned are that a minimum of 30cm of trough space per animal is needed, as all sheep have to be able to be feed at once.

Keep the containment area close to yards and silos for ease of management.

Clean, cool water is essential and ensure sheep have access to salt, lime and causmag while on grain,

CONFINEMENT feeding has meant Riverina family-run Curry Farming Enterprises did not have to sell down during drought and it placed them in a prime position to buy in when rains arrive.

For those trying to rebuild amid the ever-fickle nature of livestock supply and demand this year, that adds up to a very valuable management tool for a grazing operation. ON THE GROUND: Riverina mixed farmers Tom, Tim, Brian and Glenn Curry have pioneered the use of confinement lots and shared the lessons they've learned at a livestock forum last week. Photo: Emily Malone, Graham Centre

Glenn Curry, who manages the 2800 hectare mixed farm in the Junee Reefs and Dirnaseer area with his brother Brian, son Tom and nephew Tim, also believes stock are more content. 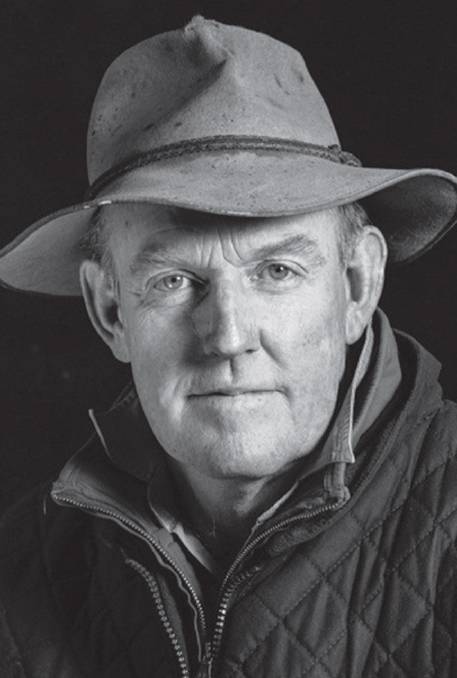 They are not wasting energy chasing 'that last blade of grass' in a big dusty paddock, he said.

Confinement lots have also allowed better nutritional management of single and multiple bearing ewes at the Curry operation, he said.

They built their first confinement lot in 2008 on non arable country as a drought mitigation measure - seven pens, 80m by 50m. But they have used them every year since, accommodating around 2100 sheep.

Stocking density is at least five square metres per head.

Mr Curry explained Merino ewes were joined to terminals after a January shearing for ten weeks. The Merino self-replacing ewes are joined after shearing in February, for five weeks.

All ewes graze cereal and canola stubbles after harvest - the farm has 1800ha under crop - and as that runs out, they start on barley and silage supplements to prepare for confinement.

Confinement lots allow for managing age groups differently and dividing the ewes up based on condition score, Mr Curry said.

There was no lambing in containment lots and no intention to do that, he said.

"Our confinement lots are used year round now - they are a great asset, very useful for scanning, lamb marking, crutching, weaning and holding pens prior to transporting to sale," Mr Curry said.