A young fashion designer from rural Victoria is flying the flag of Australian wool as she kick starts a career in the industry. 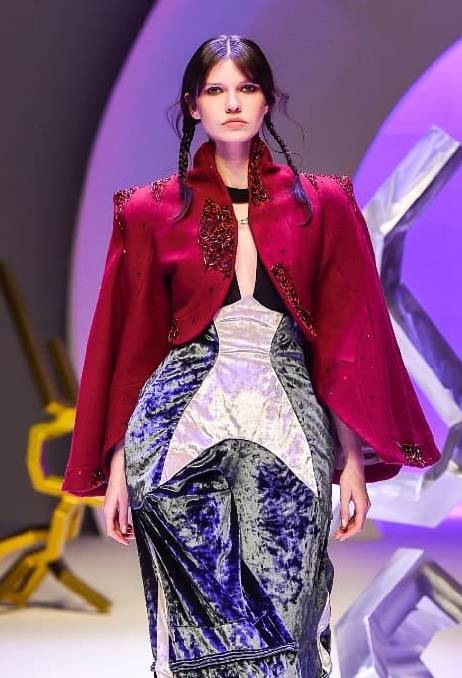 Up and coming fashion designer Emma beard designed this red jacket using 100 per cent wool, as part of her graduate collection.

A young fashion designer from rural Victoria is flying the flag of Australian wool as she kick starts a career in the industry.

Emma Beard grew up in Greendale in central Victoria and while she wasn't on a farm herself, she spent a lot of time talking to farmers while working at the local hardware shop and visiting her family on Camperdown, Vic, dairy farms.

Ms Beard's passion for fashion came at a young age; she recalls being able to sew from the age of 11.

So a career in the industry was a no-brainer.

But it wasn't until she began studying a Bachelor of Fashion Design at Box Hill Institute in Melbourne that she truly realised the opportunities she had ahead of her.

The course also opened her eyes to the incredible credentials of wool and she began to experiment more and more with the natural fibre.

"In my second year we learned about tailoring and that gave me an idea of the historic uses of wool, particularly when it came to men's suits," she said.

"It also enlightened me as to how else it can be used."

She said it was a very complex yet magical fibre.

"It's good at holding water, it's fire retardant and it keeps people warm," she said.

"People think of it as hot and itchy, not something that can be advantageous and beautiful all year round."

She believed a misconception surrounding shearing and whether it was cruel was holding back some consumers from embracing the product.

"There has been a big shift to where people don't want to wear animal products as they believe it's inherently a bad thing," she said.

"But they don't realise that sheep need to be shorn for their health and that it's not a bad thing."

However, she did think the sustainable qualities of wool were becoming more well-known.

"In modern fashion, it's so fast-paced and there's a new drop every week but I think we're moving more towards better quality, longer lasting products, that wool really fits into."

Ms Beard was meant to graduate from her course in April this year but COVID-19 halted plans for any official ceremonies.

She's currently trying to get as much experience under her belt as possible, while at the same time working in retail, to work towards her end goal of a career in costume design.

She said costumes were like an art form and wool helped tell the story perfectly.

"In historic costume design, it's very important to replicate the era you're working with," she said.

"Wool is incredibly important in that because it's one of the first fibres used to clothe people, so it represents that era accurately."

And she said the practicality of the product made it ideal for use in costumes.

"As far as its performance goes, it's a very comfortable fibre," she said.

"Australia is a very hot continent and wool is good at whipping away the moisture.

"And it can be worn for 30 years without breaking down too much."

She said she was interested in learning historical methods of clothing production.

"I love trying to learn historically accurate methods, when they didn't have the convenience of an electric sewing machine and they had to figure out how to make a buttonhole, stitch in the channels of a corset or embroider something by hand; their methods were ingenious and those skills have died over time," she said.

"Wool is such a historical fibre and people have always used it in such an innovative way.

"It can be manipulated to mould to a person's body without having to sew in many darts or gussets, it presses beautifully and has such a wonderful hand.

"I love watching it come to life."