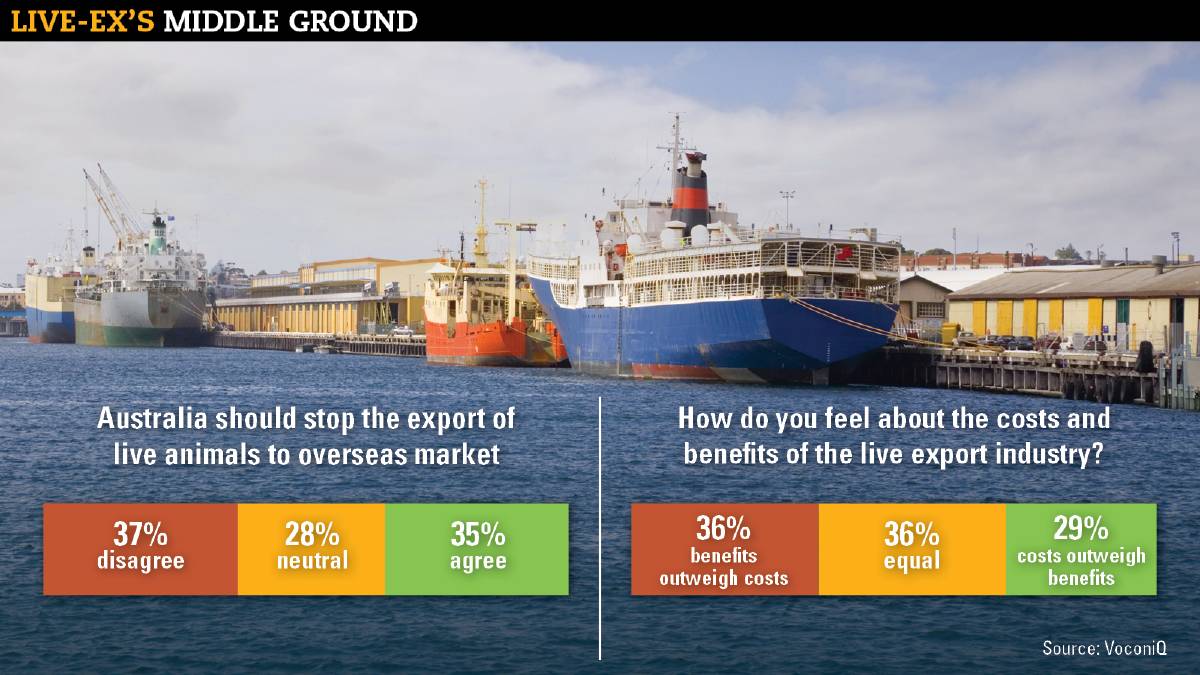 KEY FINDINGS: New scientifically-designed research shows the value proposition among Australians for the live-ex industry is in fact evenly balanced.

GROUNDBREAKING community attitude research shows a large section of Australians either don't have strong views one way or another on the livestock export industry or have gaps in their knowledge.

The findings from the scientifically-designed study are in stark contrast to much-touted polls and claims by agenda groups that the vast majority of Australians want the trade banned.

What the results highlight is a big opportunity to help people understand the trade and allow them to make informed judgements, according to the data science company that conducted the research, Voconiq.

The industry's technical services and research provider LiveCorp commissioned the work, which involved surveying close to 5000 Australians this year, with further surveys to be run over the next two years.

The results show animal welfare is just one of a number of issues that influence community acceptance of the trade and that the importance of livestock exports to the economy, farmers and to rural communities is far more widely recognised than what social media might indicate.

However, a key finding was that while Australians understand the benefit of live exports for people overseas in terms of nutrition, food safety and cultural or religious reasons, appropriately caring for animals is viewed as a fundamentally important part of this process.

Overall, those surveyed felt the benefits of the industry are about the same as the costs that relate to it.

Voconiq chief executive officer Kieren Moffat said the first thing to note was that attitudes to live-ex were not black and white.

The way live-ex is portrayed is often very negative but the story is far more nuanced and the value proposition among Australians for the industry is in fact evenly balanced currently, he said.

That large 'middle ground' was seen in issues involving many rural industries, he said.

It was often a reflection of an industry operating at arm's length to the community, an industry hard to see into, and it presented much opportunity for a more constructive conversation between the industry and the community.

"This highlights the need to do better at explaining how the industry works and how it is continually improving animal welfare, to help fill those information gaps. We want that to be a two-way conversation, continuing to hear the views of the community and being available to answer any questions," he said.

ALSO READ:Economic value no case for live ex in most minds

Dr Moffat said the research was designed to ask questions of a broadly representative sample in a way that was not leading and not designed to deliver an outcome but rather explore issues with real curiosity.

It also incorporated the full breadth of interaction points between the trade and the community, which goes a long way to explaining why the results were so different to single-issue polls, he said.

The findings are outlined in a report titled Live Exports and the Australian Community, available on LiveCorp's website and on Voconiq.

The report's conclusion says the work demonstrates the relationship between the livestock export industry and the Australian community is complex.

Mr Brown said working through the findings with industry was the next step, to identify where action could be taken to address those areas of greatest concern.

"It was very clear from the survey that there can be no compromise on animal welfare, which was no surprise. As an industry, we need to continue taking on board people's concerns, showing we share their values and that we're responding to them," he said.

"What is pleasing, given the survey was representative of all Australians, is that despite what many groups would have us believe, the results show the majority of the community does not oppose the industry.

"Australian livestock are vital in providing fresh, affordable meat in many countries, especially at a time when COVID-19 has affected deliveries of chilled and frozen meat through air freight, and it's good to know the community recognises the role live exports play in improving nutrition for families overseas.

"Live exports, as part of the wider red meat industry, have continued to provide an income to farmers and employment in regional Australia in a time when many other areas of the economy have been affected."

The industry would now be able to 'digest, reflect and respond' to the findings and the second and third year of the project would enable it to see how consumer sentiment changes as a result, Dr Moffat said.

"The long-term nature of the project also allows us to drill down into certain issues that may emerge, to look at issues in more detail and in different ways - to unpeel the onion and help industry to engage proactively," he said.