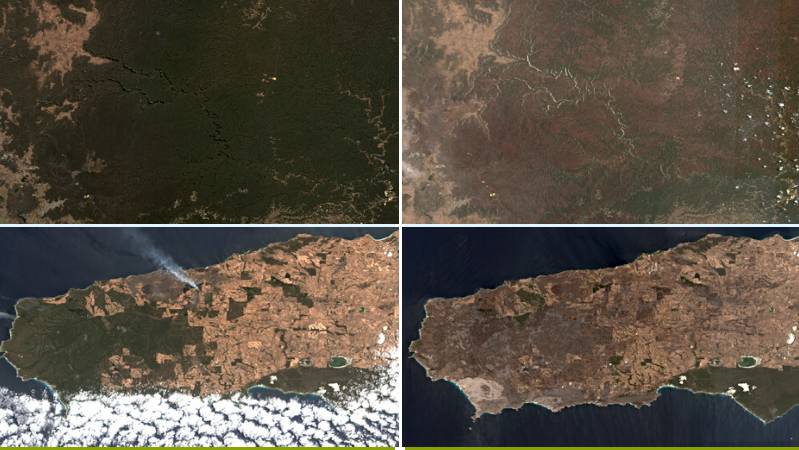 All images courtesy of Google Earth Engine, Landsat and Sentinel-2.

See how the landscape has changed since the fires.

It's been a long summer, and there is still so much to go before the fire season is over.

With so much of the country burnt, it's hard to take in exactly how much land has been turned ash - so we've taken to satellite images to get a proper look at the devastation this summer has seen so far.

In NSW we've looked at the Mid North Coast, the Blue Mountains, Snowy Mountains, and down to the South Coast, we've taken at look at Kangaroo Island and Cudlee Creek in South Australia and the Gippsland and Lakes regions in Victoria.

As October neared its end a lightning strike started what would become the NSW Gospers Mountain fire - a fire that would become one of the biggest forest fires Australia has ever known from a single ignition point.

While it's now under control, it's burnt through 512,626 hectares and was split into a second fire, the Grose Valley which burnt for 47 days but is now declared out.

It joined the Kerry Ridge fire, the Spring Gully fire and more to cover the western border of the Blue Mountains to the Central Coast hinterland, north to the Hunter Valley and south to the Hawkesbury and past the Bells Line of Road. It devastated many council areas and towns.

But before Gospers really got underway, the fire season had well and truly started on the Mid North Coast.

By early November 17 fires were already at emergency level, 99 were burning across the state and the biggest area under threat was the Mid North Coast and Northern Tablelands.

This image shows the area between Glen Innes, Grafton and onto the coast before it burnt, with the before shot snapped (on the left) between September 1 to 5, 2019, and then how it looks now, with the after shot (on the right) snapped between December 30, 2019 and January 5, 2020.

As long summer carried on, so too did the fires. It was the South Coast's turn.

Fires such as Currowan 2, Charleys Forest, Clyde Mountain and Morton Fire all raged, with Currowan 2 burning more than 314,000 hectares since it started in late November.

Here's what the area from Batemans Bay in the north to Bermagui in the south and Cooma in the west looks after the fires (right), a shot taken from satellite between January 10 to January 15. The before shot was taken between November 21 to 27.

Here is what it looks like west of Nowra, prior to the fires (left) taken between November 30 and December 6 and post fires (right) January 26 to February 2.

As the New Year came around, Kangaroo Island was hit hard by fires, losing lives and wildlife as a third of the island burnt.

This is how Kangaroo Island looked before the fire (on the left) and how it looked after (on the right). The before shot was taken between December 24 and 31, while the after shot was taken from a satellite between Jan 26 and February 2, 2020.

As the New Year drew close the fires began in Victoria, with the evacuation of Mallacoota to dominate news bulletins for days. The Navy vessel HMAS Choules began evacuations on January 3.

The day before saw a state of disaster declared for first time across fire-affected regions in Victoria.

As Christmas neared the Cudlee Creek fire was declared an emergency disaster. The fire, with a 127km perimetre, had destroyed 87 houses and almost 500 other buildings.

More than 1100 hectares of vineyards were thought destroyed or damaged with the industry losses at more than $100 million.

The Dunns Road, Green Valley, Orroral Fire, Adaminaby Complex and Scabby Range were just some of the fires that burnt and are still burning in the Snowy Mountains in NSW.

Dunns Road is under control but sitting at 333,940 hectares, while Green Vallery has burnt through more than 200,000 hectares of land.

The ACT Tharwa fire isn't captured well in the footage as it was only just starting when the imagery was taken.