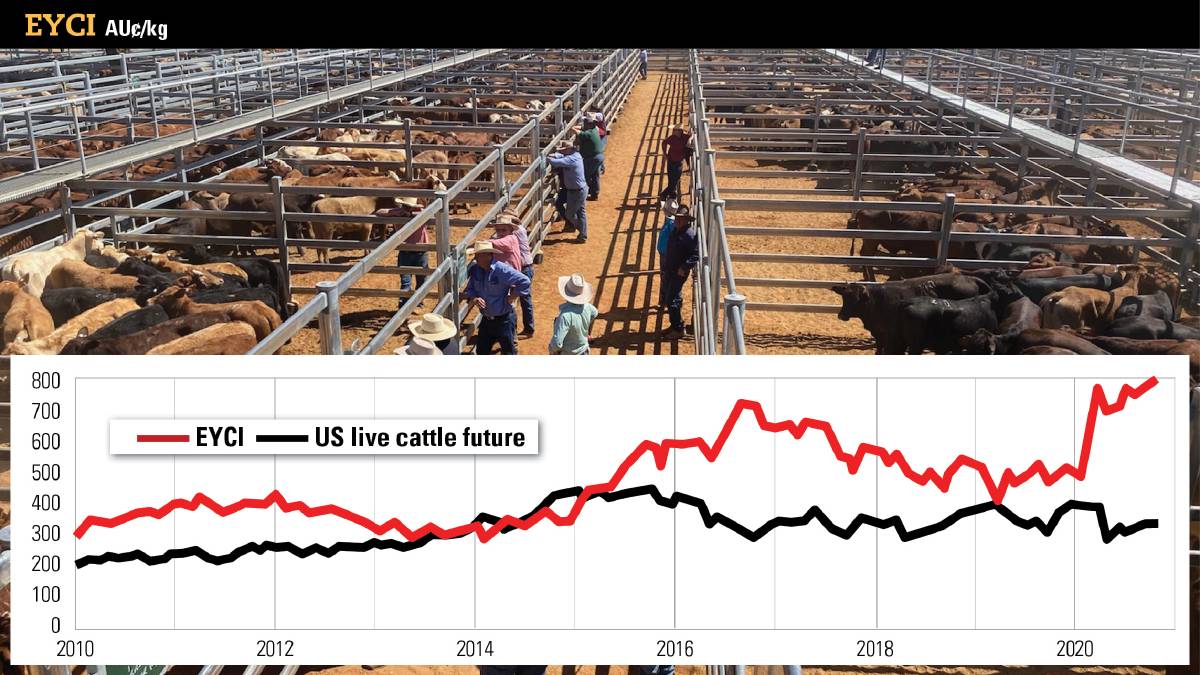 GAP WIDENS: Australian cattle prices are at a big premium to the US, and increasingly detached from global cattle market fundamentals. Source: NAB.

LA Nina's paddocks of oozing feed will keep restocker demand for young cattle at its current supercharged level well into next year but how long that keeps the market in record territory will come down to two things.

How seductive prices above 800 cents a kilogram carcase weight prove for those who would otherwise be in full rebuild mode and at what point global fundamentals starting biting harder into heavy steer prices are the two big 'watch' factors from here, analysts believe.

Continuing what has been the fastest run-up in cattle prices in Australian history, the Eastern Young Cattle Indicator crossed the much-touted 800c mark late last week and finished Tuesday night at 822.50c.

Good rainfall in Queensland could well push it even higher this week and most analysts agree it's likely to hold well into next year.

National Australia Bank is forecasting an 800c average until next April, then 700c for the following quarter and 500c by the end of the year.

Thomas Elder Markets' Matt Dalgleish, one of the first to predict the EYCI would indeed hit 800c, says 830 to 850c is now not out of the question, driven by the response to pasture that is going to be available.

Given it's warm and wet enough in the south for grass to still be growing and the amount of feed in the pipeline in Queensland on the back of La Nina, restocker demand will remain widespread and strong, he said.

Beyond 850c, however, things become dicey as to whether a profit can be turned, regardless of what grass is on hand, if the heavy steer price doesn't follow suit, Mr Dalgleish said.

Heavy steers are already at a record, and processors are not making money.

"There seems to be optimism for the heavy steer price to hold at the higher level into next season, and that is giving people confidence to keep younger cattle and put the weight on them," Mr Dalgleish said.

"But if you are paying 850c for young cattle, you will need that heavy steer price to be above what it is now when it's time to sell."

The disconnect between Australian and global cattle prices, and the influence on international beef demand as the pandemic continues to inflict pain, will likely start to chip away at the market driver dominance of restocker demand next year, analysts say.

Historically, these type of disconnects don't last more than a year - the overlay, of course, being Australia's is at its lowest herd size in decades so if ever there was a time for it to linger, it's now.

NAB agribusiness economist Phin Ziebell said the next six to 12 months would be a time of heightened price volatility risk for cattle producers.

The 2020 price heights had been driven by restocker interest at a time global fundamentals should be dragging it down, he said.

"The EYCI could definitely go higher still - the thing now is Queensland is very short of cattle and La Nina says cattle growing country could be drenched," he said.

"How do you square away buying young cattle at such elevated levels? Ultimately, people who want to remain cattle producers have to restock on some level."