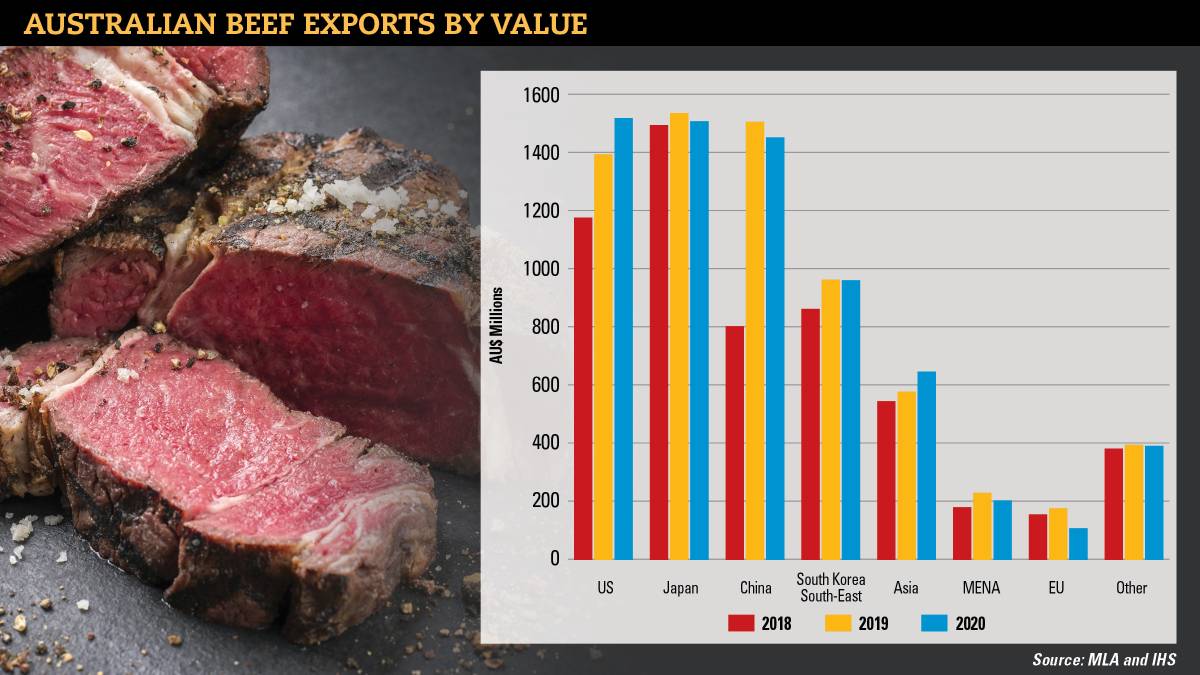 FOR all the dark clouds hanging over the beef export scene, strong fundamentals persist and new opportunities appear to be continually popping up to offset looming headwinds.

Uncertainty, much of it in the form of COVID-19 fallout, continues and displacement of Australian beef with United States product in high-end markets is now being touted as a key 'watch factor'.

On the other side of the coin, growing beef demand courtesy of an expanding world population and increasing incomes in key markets is still very much in place and African swine fever has created big gaps in global protein supplies that Australian beef can benefit from.

China is a market where it's particularly difficult to gain a sense of whether the threats are outweighing the opportunities at the moment, market analysts say.

Thomas Elder Markets' Matt Dalgleish described the import of meat into China during 2020 as 'stratospheric' and says there are little signs of it reducing to pre-ASF levels.

Rabobank now believes the global pork price has risen to a level that will suppress pork consumption permanently.

Beef, which used to be consumed mainly in eating-out-of-home channels in China, is finding ways to penetrate into home consumption, according to Rabobank.

Signs are emerging that the downhill trend in volumes of Australian beef to China since May is starting to turn around.

Analyst Ken Wilcock says progressive figures from the Department of Agriculture suggest overall volume is on the increase and trade sources have confirmed there has been a recent uptick in trade with China in both the upper chilled beef segment and the lower end of the market.

China imported its largest ever monthly beef volumes from Brazil in August - more than 88,000t - and it continues to import significant volumes from Argentina.

"At the same time, China is continuing to expand its market to an increasing number of suppliers," Mr Zhu said in MLA's latest On the Ground poducast.

"US beef imports have reached 20,000t in a matter of months and now poses the biggest threat to Australia in the premium sector.

"While both the US and Australia have political relations with China at a low level, US ag commodities are gaining market share quickly from Australia."

Mr Zhu reported China has largely recovered from COVID-19 to an almost 'business as unusual' level, however medical professionals were now cautioning against a second wave.

MLA's October cattle market projections say that while export volumes are down 11 per cent year-to September due to supply shortages, the export value to July rose 4pc to just short of $6 billion.

Meanwhile, a fascinating situation was emerging in relation to US exports into Japan and Australian exports into Korea, international analyst Simon Quilty points out.

Trade agreements look set to effectively 'cross over' and almost compliment each other, he said.

Australian beef exporters' predicament of a low safeguard threshold into Korea, constantly under threat of being triggered, is the same that US beef exporters now face into Japan following the trade agreement struck this year, said Mr Quilty, managing director of MLX and Global Agritrends Down Under.

When triggers occur, Australia's beef duty into Korea increases from 21.3 to 30pc while US beef duties go from 26 to 38.5pc in Japan.

While Japan and Korea may play a role in servicing each other's needs to an extent, there may be further positive outcomes for Australia.

Japanese importers might well become nervous of the tightening on US supply and the lower production out of Australia as early as this month and look to step up and buy both chilled and fresh Australian beef away from other markets, Mr Quilty predicted.

"Should an early wet season come to Australia, this problem could compound itself with early closures of Queensland meatworks and Australian beef becoming even scarcer," he said.