TICK REMOVAL: Acute disease develops about 13 weeks after the tick bite, but the chronic form of ehrlichiosis may not appear until months or years later. Picture: WA government.

A deadly dog disease which is spreading rapidly across northern Australia has now been found in South Australia.

A deadly dog disease which is spreading rapidly across northern Australia has now been found in South Australia.

The discovery of infected ticks confirms the worst fears of experts who say there is no stopping the spread of canine ehrlichiosis right across Australia.

In just six months many hundreds of dogs have already died in Western Australia and the Northern Territory from the tick-borne disease.

The actual disease was not found in South Australia which is not passed from dog to dog but by the common brown tick which is able to survive in all states.

It was ticks infected with the deadly bacteria which were discovered in northern South Australia last month.

Ticks collected from two dogs in South Australia as part of national surveillance measures were found to be carrying the disease.

"You should also inspect your dog regularly for ticks, and when travelling, try to avoid areas where ticks might be," Dr Carr said.

"The far north regions of South Australia are where dogs are at highest risk, so if you live in, or travel in and out of these regions, you should be taking extra care.

"If your dog gets sick, report it to your vet, and tell them where you've been and when."

She said it was unlikely dogs in the southern parts of South Australia will be infected, unless they have recently travelled to or have come from areas where infected ticks occur.

"The brown dog tick is found all over South Australia, so it is possible that infected ticks will eventually be found in other regions as well."

Many hundreds have already died in the Norther Territory and Western Australia, where it was only discovered in May last year.

Within a month it was found in the NT and biosecurity surveillance programs were introduced across Australia to map its spread.

Despite strict quarantine programs over many years designed to keep this disease out of Australia, no one is sure how it has got in and there is no vaccine for it.

South Australian dog owners are now being warned to ensure their dogs are in good health, free of ticks and on a tick control program.

"Should any of your dogs be showing signs of illness, please ensure you have them checked and certified by a veterinarian that they do not have E. canis (ehrlichiosis)," SA's Department of Primary Industries and Regions says. 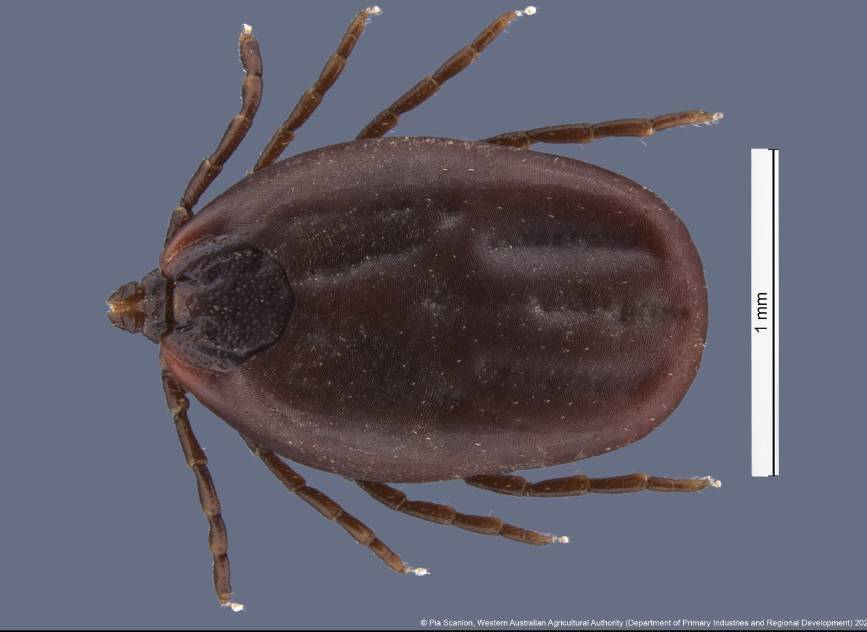 Dogs become infected with ehrlichiosis after being bitten by an infected tick, typically the brown dog tick

This tick has been detected in all regions of South Australia, however occurs more commonly north of Port Augusta, the department says.

Perth's Murdoch University conducted research into the spread of brown ticks in 2016 and found a "southwards expansion of the brown dog tick's geographical range".

"The reasons why aren't fully understood, but may include increased pet travel around the country and possibly also climate change," the university said.

The university's researchers said the tick is also well adapted to indoor living and readily establishes within kennels or homes, and even in cooler climates.

"These conditions mean E. canis can spread to most parts of Australia," the university said.

It is the university's College of Veterinary Medicine principal, Professor Peter Irwin, who described the arrival of ehrlichiosis into Australia as a disaster.

Nationally, there are ongoing investigations by authorities into the value to trying to slow the spread of the disease with inter-state border checkpoints, similar to those used to control the spread of the coronavirus pandemic.

Professor Irwin is doubtful the spread of the disease can be slowed.

Ehrlichiosis is a nationally notifiable disease.