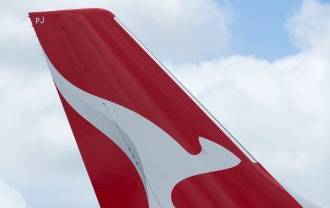 QantasLink has accused Regional Express of throwing a tantrum and blaming the national carrier for cuts to regional services.

QantasLink has accused its regional rival, Regional Express, of throwing "a classic Rex tantrum" after the country-based airline claimed aggressive predatory moves by Qantas were forcing it to revamp and cut services.

"Rex believes they have an enshrined right to be the only carrier on some regional routes," said QantasLink chief executive officer, John Gissing.

"Rex's idea of competition is it's something that happens to other people.

"It feels like Rex is trying to blame Qantas for other challenges they may be having."

Rex has blamed new Qantas services in NSW to Orange and Merimbula, and planned services to Griffith, Albury, Wagga Wagga, and Mount Gambier in South Australia, for forcing its own plans to scuttle flights to Bathurst, Cooma, Lismore, Grafton and Kangaroo Island.

The shake up will see its Sydney to Lismore and Grafton services on the NSW North Coast, which carried about 30,000 passengers annually before March 2020, replaced with Sydney flights to and from Coffs Harbour and Port Macquarie on the Mid North Coast.

Rex deputy chairman John Sharp accused the national carrier of attempting to intimidate smaller players, notably Rex which is about to start its own jet services between Sydney and Melbourne to compete head-on with major airlines Qantas and Virgin Australia.

"Qantas has clearly embarked on a deliberate strategy of moving into Rex routes that can only support one regional carrier in an attempt to intimidate and damage Rex in its traditional regional market," Mr Sharp said.

When government support for regional airlines through the Regional Airline Network Support program ended in March he said Rex would have to cancel the five NSW routes to and from Sydney and the Adelaide-Kangaroo Island service, which already competes with a similar Qantas service.

Rex also called on Australia's competition watchdog to intervene in what it believes is Qantas attempting to squeeze out smaller regional players.

It asked the Australian Competition and Consumer Commission to take enforcement actions for what it felt was Qantas' predatory behaviour.

"All carriers are facing existential challenges and the ACCC must do its part to ensure that the dominant carrier does not take advantage of the current situation to deliver pre-emptive strikes against its much smaller competitors," a Rex statement said. Mr Sharp said Qantas had collected about $1.2 billion in Commonwealth assistance to stay solvent, but still felt it was appropriate to use taxpayer's funds to finance the losses on new services with the sole objective of weakening its competitor.

However, Qantas arked up in response saying Rex was itself receiving millions of dollars in "bespoke government assistance" for its regional operations while also acquiring new aircraft to fly between capital cities.

QantasLink insisted it would only be starting new routes if they were commercially viable and it would consider starting services on routes Rex was threatening to quit.

"We don't start routes if we don't think they will be commercially viable for us," Mr Gissing said.

He said extra capacity and lower fares on country airline routes would increase overall travel demand, which was "good news for the regional communities we will be operating to".

Qantas has also insisted Australian travel trends have changed since the start of the pandemic, which was why the group had announced 26 new routes to reflect new demand patterns.

"Only eight are on routes that Rex currently operates," Mr Gissing said.

"As distinct from Rex, Qantas has not been acquiring new aircraft types and setting up entirely new operations in the middle of a pandemic, while at the same time receiving (relatively to their pre-COVID revenue and earnings) large amounts of government support.

"The majority of government support received by Qantas went directly to its people, who were literally grounded with no work, through JobKeeper."

Other support (which was provided to all airlines) went towards maintaining critical passenger and freight connectivity, bringing stranded Australians back home and offsetting a range of government charges on the industry.