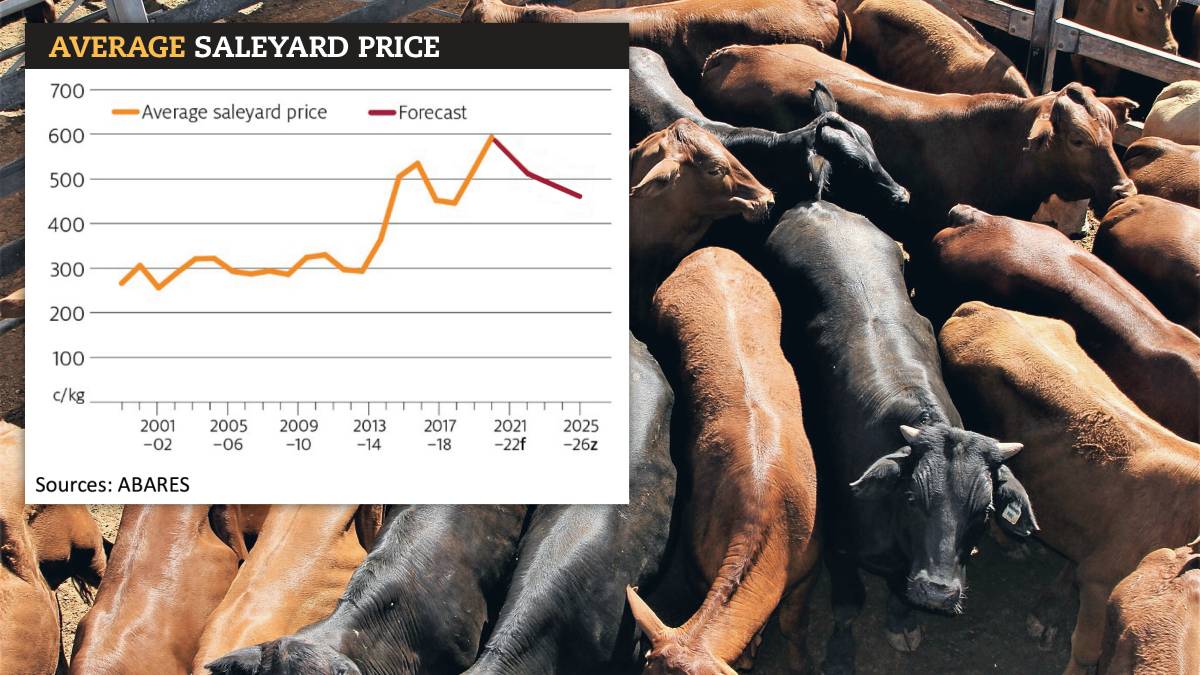 ABARES says this financial year is the eight-year peak; but prices will ease later in 2021

THE RIP-ROARING way cattle prices kicked off the year can't be expected to continue forever but leading analysts and economists believe the market will not fall considerably this year.

It's unlikely there will be a major correction during 2021. Cattle prices are set to stay well above the long-term average.

That forecast has given way to the idea of a 'new normal' for the cattle market. It has prompted discussion that others in the supply chain, particularly feedlot operators and processors, will have to navigate new ground between high prices for cattle and the ceiling at which retailers will buy beef.

Banks, industry analysts and government economists are all on the same page in terms of ongoing competition from those looking to restock keeping upward pressure on cattle prices through until at least the latter part of the year, when there may be some easing as herd numbers recover.

Those at the Australian Bureau of Agriculture Resource Economics put the weighted average saleyard price at 593 cents a kilogram in 2020-21, the highest point in the eight-year period from 2018-19.

ANZ's Ian Hanrahan points out even if prices came down 30 per cent from current levels, that would still mean an EYCI of around 620c, a peak last seen in mid-2016 to mid-2017.

ABARES latest beef outlook, released this week in conjunction with the Outlook Conference, forecasts the average saleyard price to trend downward in the following financial year, to record an average 552c/kg in 2021-22.

The market will continue on that path, with the average down to 461c/kg in 2025-26. The fall will be driven by greater domestic cattle availability in the short term and lower global beef prices, ABARES' Jonathan Wong said.

Agents and industry leaders say the way the market has opened this year is an indication of long-term producer confidence in the beef business.

Analysts are, however, now starting to warn about ensuring profit forecasts factor in the price declines likely to come later in the year and into next year, along with movements in the likes of interest rates, input costs and other variables.

ANZ says the longer the record prices continue, the greater concerns about the impact of a correction.

It's latest Agri Commodity Report says the ongoing good season and plentiful feed it is delivering, combined with months of successful weaner sales putting money in pockets, will mean producers are likely to keep bidding hard against processors and feedlotters at sales.

While a strong restocking process would normally see the national herd grow quickly, the other side of the coin is that the very high saleyard prices are encouraging farmers to 'cash in'. Some are selling heifers they'd normally retain, or offering weaners earlier. That could keep cattle supplies tight well into next year, and thus hold the market at a high level.

For the rest of the supply chain, that will butt up against the ability to extract more from customers, particularly those overseas.

ABARES's projection of lower global beef prices is influenced, in the short term, by high United States and Brazilian exports and a low Brazilian Real. In the medium term, the ongoing recovery of the Chinese pig herd will ease global protein demand.

ANZ's Mr Hanrahan says every major group along the beef supply chain will need to rethink their strategy going forward.