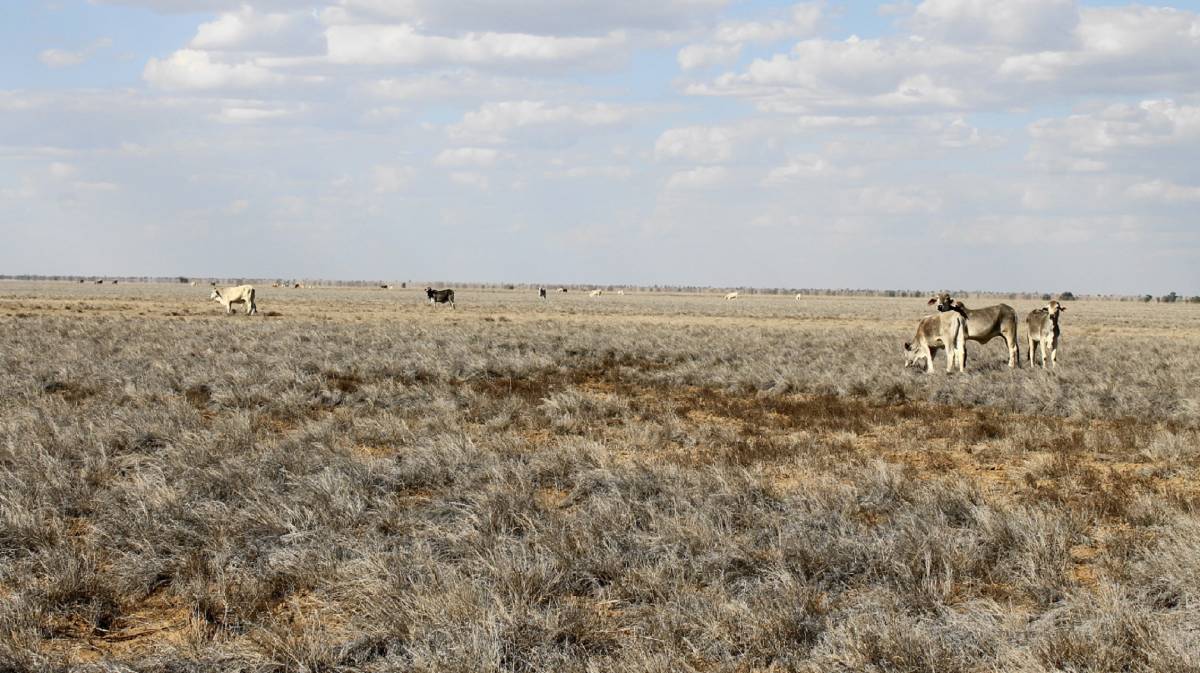 Too many years of below average rainfall and too long between decent falls is really starting to show in central west Qld.

IN contrast to the glowing reports that keep coming through on the remarkable season still being enjoyed in NSW and Victoria, the opposite is the case in central-western Queensland.

Winton agent Tom Brodie was driving to Longreach on Monday and some of the country he passed through you could easily count the number of blades of grass per acre.

Tom said too many years of below average rainfall or perhaps too long between decent falls is really starting to show on some of the Mitchell grass country now.

As well grasshoppers have done their best to denude the country.

West of Hughenden is terrible in places while south of Maxwelton there are some pockets of feed.

Winton to McKinlay and Julia Creek is looking pretty ordinary.

Overall Tom said probably 30 per cent of country is good but the balance varies down to desperate.

In consequence, a lot of stock are on the move once again, mostly weaners and cows and calves.

As was the case last year, cattle from the central west are heading south into NSW. In many instances the same buyers and sellers are lining up to do business again.

When last down in the Walgett/Coonamble area several weeks ago, Tom said once you crossed the border it was a terrific season pretty much without exception.

Tom said it was evident that a lot of people in the south are cautious about the cattle market and haven't bought in yet and accordingly there are paddocks that haven't been used which are available for agistment.

As was the case last year, cattle from the central west are heading south into NSW. In many instances the same buyers and sellers are lining up to do business again.

While there was good money in agistment last year when cattle were putting on as much as 1.00kg/day, they are not doing as well now and with a bit of uncertainty in the market there are signs that people are more cautious this year about taking or extending agistment and maybe just selling.

For the cows that went south last year with the intent to calve out, fatten and turn off, the attraction of the PTIC market in many instances saw them joined to bulls instead.

Accordingly the meatworks may have to wait a little longer for those cows to come through.

Meanwhile back in central-west Qld, the majority of places would be 20-60pc stocked in Tom's estimation.

The problem now with the way the season has turned out is that the feed resources as they stand will not see the year out even for those who are minimally stocked.

THE French regional city of Lyon is renowned for its culinary excellence, in particular the bouchons (traditional restaurants) identified by their red and white check tablecloths.

In Lyon's case, the cuisine is largely based on pork products from farms located in the Monts du Lyonnais but Lyon sits at the crossroads of different culinary traditions including poultry from Bresse, beef from the Charolais region and game from the Dombes.

In all, a very strong focus on meat so when Lyon's mayor, Gregory Doucet, decided that meat should not be included in the schools' lunch program there was uproar.

Unlike Australian schools, French counterparts have full-on commercial kitchens which usually provide a range of optional dishes for a sit-down, multi-course hot meal every lunchtime on schooldays.

Doucet claimed that it was necessary to go to a fixed menu that excluded meat in order to better observe physical distancing rules under COVID.

The illogical nature of that claim was met with derision from farmers who deduced that Doucet's Green Party political beliefs and agenda were behind the move.

Representatives from agricultural associations, suitably accompanied by tractors and cows, protested against the ban outside Lyon's city hall.

It wasn't long before the matter came to the attention of the national government in Paris.

While Australia does not have an equivalent flashpoint in this instance, inner-city political allegiance is becoming increasingly Green and this example from France shows that meat will inevitably be drawn into clashes over ideological differences in the future.

Supply picking up as outlook worsens in dry areas

AFTER a harrowing nine months of trying to keep kill rosters going, the tide has finally turned albeit on the back of worsening seasonal outlook and meatworks are now building a reasonable pipeline of cattle supply out front.

So much so that southern and central works all dropped 20c/kg off their ox and cow quotes in the last few days.

Rockhampton rates are either on par or less a 10c freight differential with their counterparts in the south-east.

Townsville started on Tuesday this week but has a good supply out front and is not quoting at present.

With mustering yet to start in the north, there is the prospect of more upside ahead in cattle supply so to have recovered to this extent at this point must be pleasing for processors despite still being a long way off returning to profit.

Southern-state grids were unchanged and now just shade Qld at 675c for ox and 610 for cow.