Round-Em-Up cattle breeding operation is going from strength to strength. 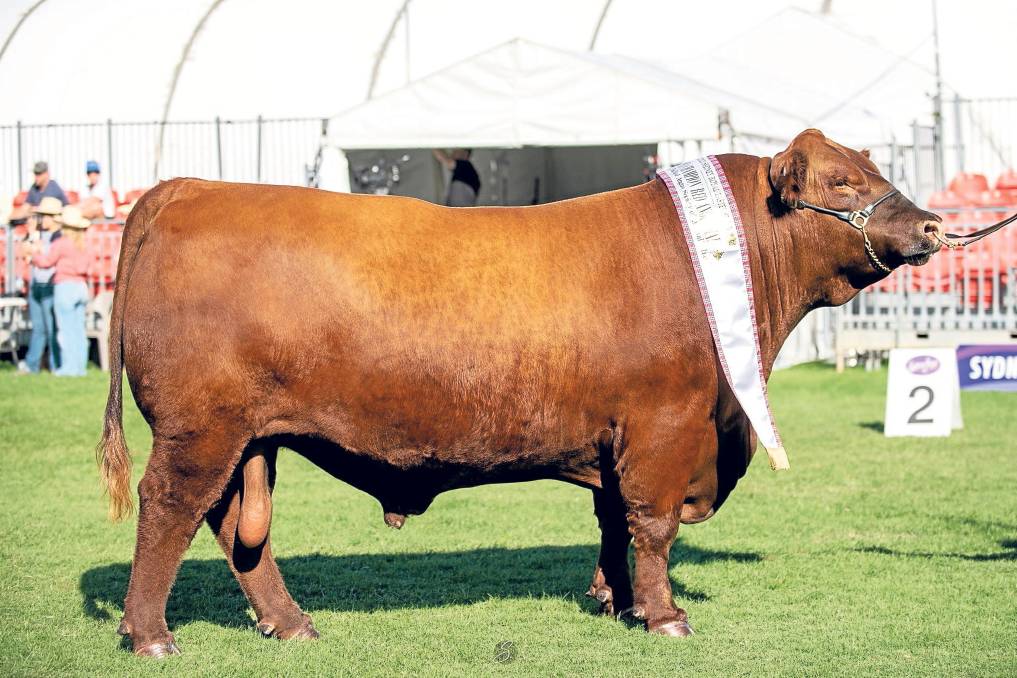 WINNER: Tipping the scales at 1212 kilograms, Round-Em-Up The Night P012 was the heaviest bull at the 2021 Sydney Royal Show, taking out supreme exhibit of the breed. Photo: BA Showcase

A family-run cattle breeding operation is going from strength to strength and the stud's recent success at the 2021 Sydney Royal Show is testament to their dedication to create carcase quality cattle.

David Hobbs managed Tullatoola Red Angus/BST for 22 years until the passing of Bruno Schmid in 2013.

"When they dispersed the stud we went out on our own. We already had our Red Angus stud but we have gone bigger now," he said.

"We have about 150 Red Angus cows and about 20 Simmental cows and we also put Simmental and Red Angus embryos in as well to get more numbers."

The stud's original genetics came from Moorwatha, and then over the years Mr Hobbs has purchased donor cows and some of the better cows he liked out of the BST dispersal sale.

"We do heavily invest in bringing in new genetics from overseas, mainly from Canada," Mr Hobbs said.

"We have a very good affiliation with Six Mile Red Angus in Canada, and we've been very happy with their genetics."

The investment in quality genetics has paid off, with a recent successful outing at the Sydney Royal.

"This year, we have exported semen from P012 back to Six Mile Red Angus and to Lodoen Cattle Company in the United States," Mr Hobbs said.

"That is something new we have done and I think he will be very successful over there as well."

"We are breeding them for meat so obviously we like the bulls to have a good temperament, thickness and they've got to have fat cover," he said.

Once weaned, the cattle remain in the yards for two weeks and Mr Hobbs uses this time to assess the temperament of their calves. FOR SALE: HOBPQ012 will be offered in the Red Angus and Simmental National sale on June 18 on AuctionsPlus.

During the drought, Round-Em-Up produced their own range of boxed beef.

After hanging the bodies for 21 days they found that if it didn't have enough fat cover the bodies would start to break down.

"We realised the importance of having a little bit more fat cover and having those cattle able to finish, to have better eating quality and better meat characteristics," Mr Hobbs said.

"We are very focused on the carcase quality and hence we got the second highest point scoring steer at Sydney Royal (93 points) with a Red Angus steer."

Round -Em-Up Red Angus and Simmental bulls can be found from the top end of Queensland, out to the Northern Territory, to Central NSW, to South Australia and as far south as Tasmania.

"We like to look after our customers, and they become friends, and as a service to our clients I like to ring them and ask them how the bulls are going and if there are any dramas and likewise, we like to hear back from our customers," Mr Hobbs said.

"Both the breeds are going really well in Queensland.

"The polled black bulls and the Red Angus are obviously going well and have always done so in Queensland.

"They handle the climate well and they've got good temperaments, so they suit Queensland quite well."

"This is a joint venture between the Simmental and Red Angus breed societies," Mr Hobbs said.

"Everyone's cattle have a place in the industry, and it is fantastic to see the two societies working together and combining their efforts to create a great sale."