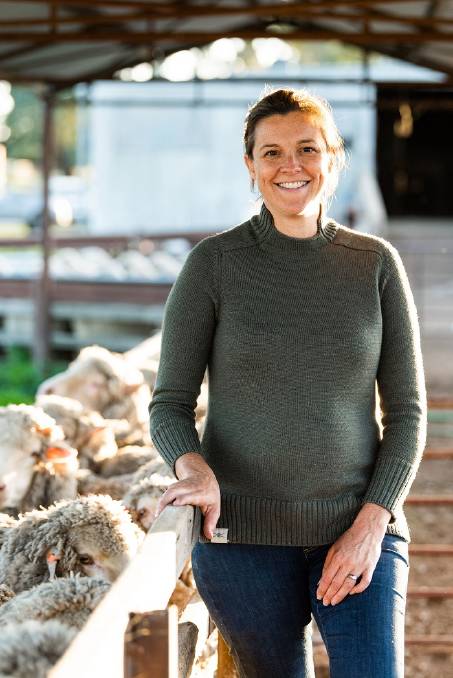 Penny Ashby said along with colleague Skye Manson, through their new campaign #whogrewmyclothes and website www.womenbehindwool.com they wanted to show the female faces of the wool industry.

A new campaign focussing on keeping the fashion industry accountable to ethical labour practices through 'Women Behind Wool' has hit the spot with audiences.

Ms Ashby said her aim was to "shout from the rooftops" to the rest of the word about the beautiful fibre.

"I was absolutely tickled pink with the response, the post generated nearly 200 shares telling me people are keen to spread the word about the fibre Aussie wool growers are producing," Ms Ashby said.

The #whogrewmyclothes project is not only an initiative to help keep the fashion industry accountable to ethical labour practises, it's also aimed to take the customer on a journey to see where our garments are made.

"I wanted to take people further back on that journey to introduce customers to the people who grew their clothes," Ms Ashby said.

The video contains three women from woolgrowing properties that introduce themselves and their woolgrowing enterprises. After a brief dialogue, each one of them finishes their sentences with, "and I grew your clothes".

The comments on Facebook were filled with words such as brilliant, fantastic, love, awesome and fabulous.

Ms Ashby said she started Lady Kate to showcase Merino wool to a generation of women who may not have worn it before.

"I firmly believe that if we can just get people to try wool, the fibre will speak for itself," she said.

"The luxurious feel of wool and the fact it is a natural, renewable fibre, grown in Australia is enough to make anyone become a lifelong fan."

Phase two of the initiative starts next week with the launch of the website www.womenbehindwool.com.au

Mrs Ashby said along with colleague, writer and farmer Skye Manson from Gunning NSW, they wanted to show the female faces of the wool industry.

"So many of my customers would love to understand where their wool comes from, but the only people speaking on behalf of the industry are those who can only speak on an industry perspective," she said.

"We want to get more of those stories across instead of it only being what is considered newsworthy and often only negative."

A series of videos and podcasts are in the pipeline with a mix of women in the industry from NSW woolgrower and medical ethics co-founder Meredith Sheil to television presenter Catriona Rowntree who found herself as a farmer's wife and falling in love with Australian Merino wool.

The website will be live from next week with teasers from women behind wool spread over social media channels during the coming weeks.

Sponsored by
Carbon neutral goal, Packhorse appointment and beef farm profits
Test
Over the last 90 years, three of the four mega fire years (when more than 1 million hectares of forest were burnt) occurred after the year 2000.
Test
Key negotiations at Fonterra's Cobden plant have been more successful than Saputo's in Allansford.
Test
Seven of the world's most promising emerging design talents have been selected for the 2022 International Woolmark Prize, including one Australian.
Test
Most places can expect an average spring fire season, while parts of NSW and Queensland are predicted to have an above average season.
Test
The retiring mayor plans to bring his appetite for "game changing" rural projects to the organisation.
Test
Crops and cattle complemented by lots of water make for commercial success in central west NSW.
Test
Australian domestic consumption of dairy products was likely to equal its production of milk by 2026, but there are still opportunities for export.
Test