After four years of drought and inconsistent farming seasons cotton farmer Dan Hayllor is feeling secure there is a future for farming as a family at Macalister.

As the cotton pickers roll through the last of the Kensington Park crop in the Macalister district, cotton farmer Dan Hayllor can't help but feel positive about the future in farming.

"I really am very excited about the future of farming after enduring some tough years recently," he said.

"After two years without a dryland cotton crop, and only a 40 hectare irrigated crop grown on bore water last year, we are now picking both our irrigated and dryland crops."

As well, they have good sorghum and mung bean crops in the ground and with irrigation dam water storage filled to capacity.

Mr Hayllor, who trades as Graincott Farming, working in a family partnership with wife Hamey and his parents Ian and Deb, have 2430ha of black self-mulching box, brigalow and belah farming country on the Western Downs.

The Hayllors took the punt and planted 450ha of irrigated Bollgard 746 and 748 in the middle of October after coming out of a drought and watered up at planting.

He said they replanted 60ha on November 16, due to a poor plant stand.

"We were really fortunate to get under two storms during December and January as it allowed us to pump from overland flow and keep our crop growing."

Mr Hayllor said it didn't rain again during the growing season so the irrigated crop had five-and-a-half waterings. 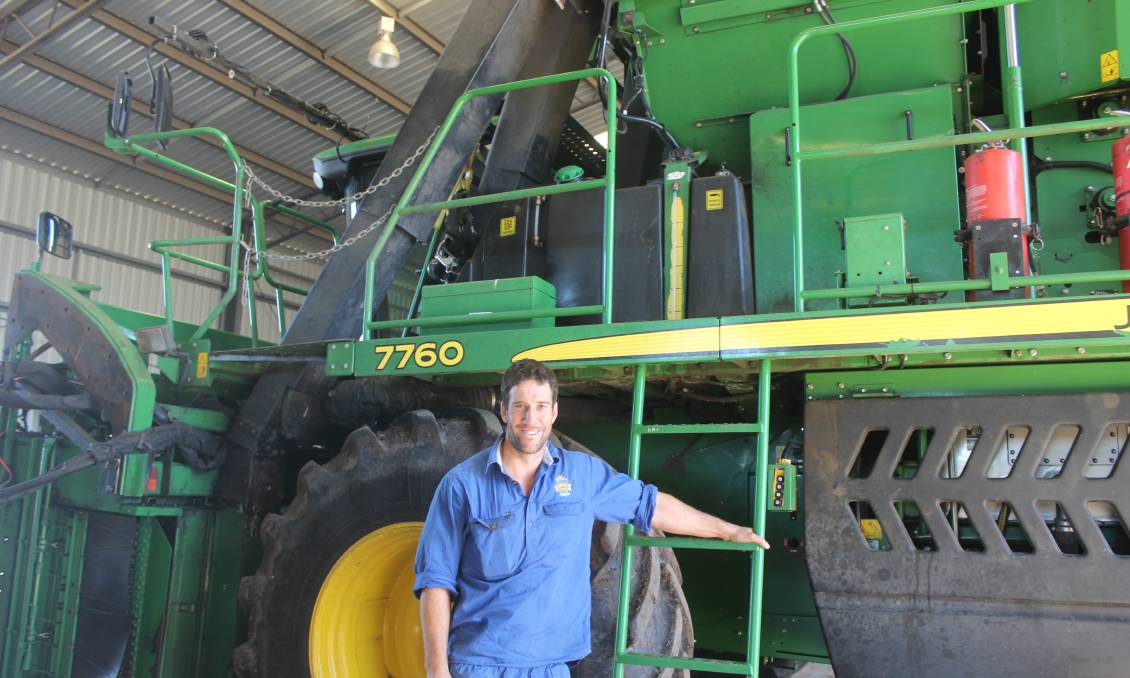 "We normally allow 80 millimetres/ha when watering but on the last water on March 8, we didn't have enough to get around the whole crop so cut it back to 50mm/ha."

Again luck fell in the hands of the Hayllors when the heavens opened on March 16 and their irrigation water storage went from empty to 100 per cent full storage.

Along with capturing the overland flow, they draw their irrigation from both the Condamine River and Long Swamp, plus underground bores from the Condamine Alluvium.

"Overall we budget seven megalitres/hectare to grow our irrigated cotton and when our ring tanks are full, have a holding capacity of 4000ML," Mr Hayllor said.

At this stage of the picking the family is looking at a return of 13.5 bales/ha for their irrigation crop.

"We aim for 15 bales, but are hoping to average 14 bales across the board," he said.

Due to concern that cotton prices would drop due to COVID-19, Mr Hayllor said they forward sold their entire crop locked in for an average of $540/bale.

Mr Hayllor said overall they were happy with their yield.

Cotton picking is underway on Kensington Park at Macalister.

"Our dryland crop of 260ha has returned 5 bales/ha and the turnout has been extremely high and is sitting at 46.57pc."

Once cotton picking is complete the sorghum will be harvested.

"We might have to grade with sorghum for mice droppings, but if we are lucky the recent rain might have washed the poo out of the crop," he said

Once all picking and harvesting is complete, Mr Hayllor will double crop the ground and start planting their winter cereal crop.