A desire to market prime lambs as well as grow high-quality fine Merino wool is the reason Allen and Joy Kelly decided to shift their breeding operation's focus to Dohne sheep.

A desire to market prime lambs as well as grow high-quality fine Merino wool is the reason Allen and Joy Kelly decided to shift their breeding operation's focus to Dohne sheep.

"Our aim is to produce the most cost-effective profitable wool growing sheep for our clients," Mr Kelly said.

"We are highly motivated by the challenge of striving to improve the genetics for the golden triangle of growth rates, fertility and wool growth with do-ability for tougher conditions too."

The extra growth and fertility of the Dohne mean the stud sells more product and has the luxury of being able to apply high selection pressure to improve genetics within the flock. 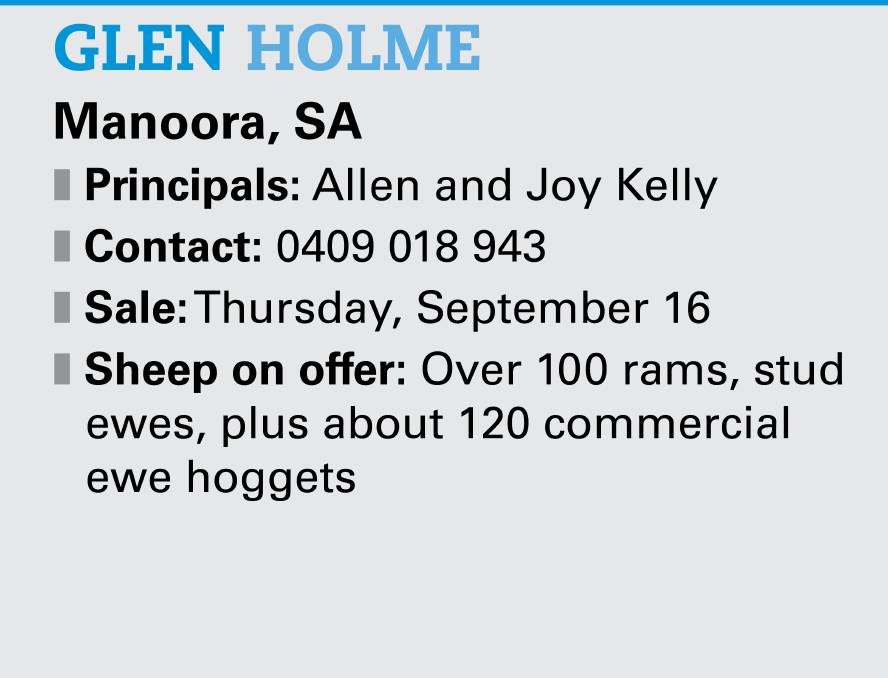 "After this, we select for increasing productivity with a balance of growth rates and wool production," he said.

"Rams need to be alert, inquisitive, proud and masculine, while ewes need to be of sound structure with balanced growth rate and fleece weight.

"Sheep that are too highly focused on fleece weight are often poor doers with low fertility and lamb rearing ability."

Glen Holme rams are purposefully paddock prepared for sale, allowing the stud to offer young rams in working condition ready to adapt to their new environment.

They have been raised to withstand varying weather events, allowing clients to select the wool type they need with confidence.

"There have also been periods where paddock feed availability has been limited. This allows the best doers to prove themselves," Mr Kelly said.

Glen Holmes rams are proving themselves to be highly productive in the Australian Merino Sire Evaluation Association (AMSEA) trials, Mr Kelly said results from trials at Balmoral in western Victoria are showing this consistently.

With the competition taking on a State of Origin-style format, Glen Holme 172565 dominated the judging by firstly winning South Australian champion then took the national award as grand champion.

"This ram has three years of naturally mated progeny at Glen Holme and his progeny are performing well in the 2020-drop AMSEA trial," Mr Kelly said.

"Glen Holme 141077 has daughters that were born in 2016 and their wool production and progeny are both being measured for the lifetime of the ewes," Mr Kelly said.

"There are 24 Merino or Poll Merino rams in the same trial. To date, the daughters of this Dohne ram have been weaning 32 per cent more weight of lambs than the average of all 25 sires. This came at the minimal loss of only 900 grams of wool cut for the year."

In the 2019-drop trial, Glen Holme 162503 has been a trait leader in three out of four Merino production indices, topping the Dual Purpose+ index and having the highest aggregate from all 20 rams entered.

"In the 2020-drop trial at Balmoral, our grand champion Dohne ram's progeny are showing the style and quality of wool that the panel of judges saw when awarding him the top prize at Bendigo, while showing the expected growth rates that Dohnes are renowned for," Mr Kelly said.

Supplementary feeding is kept to a minimum on-farm, generally only through late summer and autumn until new season pasture growth is adequate to maintain the condition of pregnant and lactating ewes.

The property produces its own hay that is a multi-species combination, usually a cereal combined with one or two legumes.

"Our winter temperatures are low, so until September, pasture growth is limited for a few months," Mr Kelly said.

"Paddock growth is often beginning to ramp up as late as the second week in September, so to avoid the heavy reliance on grain feeding pre-sale, we have chosen the third week in the month for our sale date.

"As a result, our clients can be confident that our rams are fit and ready to gain weight as they acclimatise to their new homes without the need for 'letting down'."