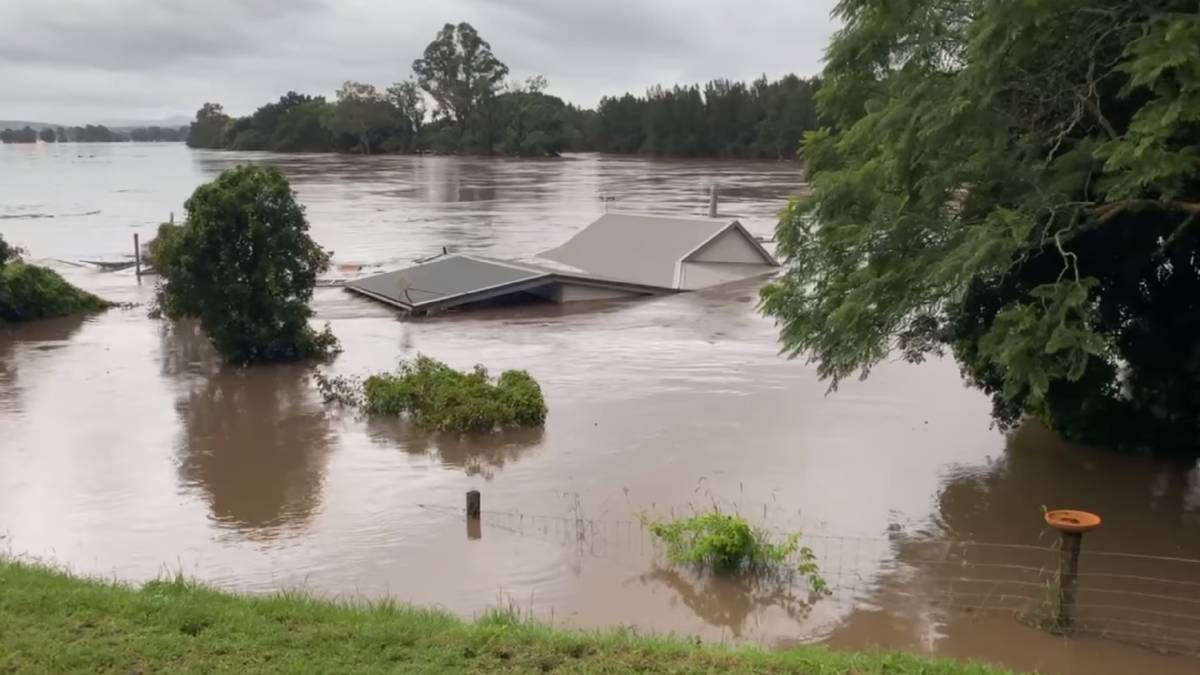 A house floats down the Manning River at Tinonee in the March 2021 floods.

Aquatic ecologist Dr Keith Bishop has recognised a connection between the arrival of tropical marine surprises, higher water temperatures, and the 2021 big wet.

Aquatic ecologist Dr Keith Bishop has recognised a connection between the arrival of tropical marine surprises, higher water temperatures, and the 2021 big wet.

Dr Bishop noticed a correlation between ocean temperatures becoming warmer, and the 'big wet' of March 2021 which caused one in 100 year floods on the Mid North Coast of NSW and flooding in outer Sydney.

Dr Bishop has been undertaking marine fish surveys in his home area of Seal Rocks, NSW, since 2015.

Earlier this year he wrote a story for local media describing an exceptional influx of marine tropical fish arriving at Seal Rocks courtesy of the East Australian Current (EAC) which was running strongly and close into shore, bringing in very warm turquoise waters.

Dr Bishop is now trying to relate how the strength of the EAC influences the type and number of tropical species and if there is any evidence that their numbers are increasing through time.

Critical in interpreting this information is satellite-derived ocean temperature data which he has been picking from the Integrated Marine Observing System (IMOS) website since 2014.

Data on the waters about Seal Rocks revealed that in early March 2021 a record was set with the surface ocean waters consistently reaching exceptional highs of 25-26 degrees Celsius.

Looking back to 2013 there appears to have been a consistent increase in temperatures at this time of year. Before then there was a La Nina when temperatures were elevated to above 23 degrees, a much lower level than the La Nina occurring through March this year. 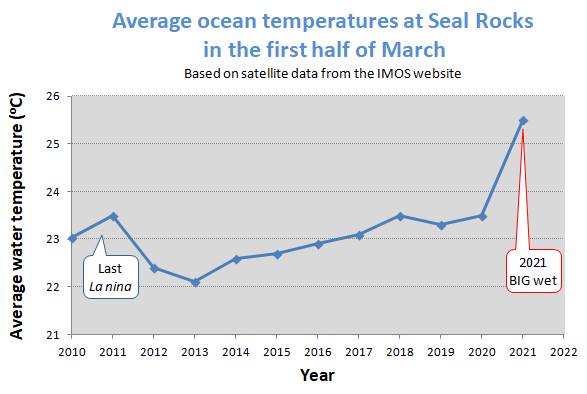 Dr Bishop then started to join the dots after plotting this data and was shocked to recognise a connection between the exceptional arrival of tropical marine surprises, higher water temperatures, and the very unwelcome surprise of the extreme rainfall on the Mid North Coast in the second half of March - The 2021 big wet.

Unfortunately, high ocean water temperatures are a perfect set-up for heavy rainfall events as evaporation is stronger over warmer water, that is, water is much more easily lifted up out of the ocean up into the clouds then dropped onto the land, if the right type of weather system comes in.

Holding wind speed and humidity constant, evaporation increases by almost 60 per cent when water is warmed from 23 degrees to 26 degrees.

"In March 2021 the 'right' types (perhaps wrong types!) of weather systems came in, and these would have 'fed' off the warmer ocean waters delivering ridiculously intense rains and floods to our region," Dr Bishop said.

Rainfall records fell comprehensively along the Mid North Coast - at his home near Seal Rocks the 32 year record of monthly total rainfall was 584mm (February 2020), and this was nearly doubled to 1020mm in March 2021.

One of the key climate change predictions is that ocean currents will be energised and warmer water will be delivered further away from the equator.

The relevant current for eastern Australia is the EAC, and this heating effect certainly appears to be happening locally at an alarming rate.

Recent analyses by the University of NSW have shown that parts of the NSW coast are so-called global hotspots for ocean warming.

There are parallels in other countries. In recent years southern Japan has regularly been experiencing very intense rainfall events - guerrilla rains - with all kinds of terrible consequences (inundation and landslides, for instance), as their ocean current - the Akashio - strengthens and warms up.

"People in Japan are very much aware of this, probably partly because it brings in different fish species. Strangely, in Australia the devastating implications of the revving up of our tropical currents appears not to be widely appreciated," Dr Bishop said.

"The idea that with climate change the EAC will rev up and bring us lovely warm tropical waters - and interesting tropical animals - is appealing, but it has a very nasty sting in its tail, as we have just experienced.

So the next time I see all kinds of tropical marine wonders turning up at Seal Rocks, I will unfortunately be fearful that it is a sign of terrible, terrible weather conditions to come," Dr Bishop said.