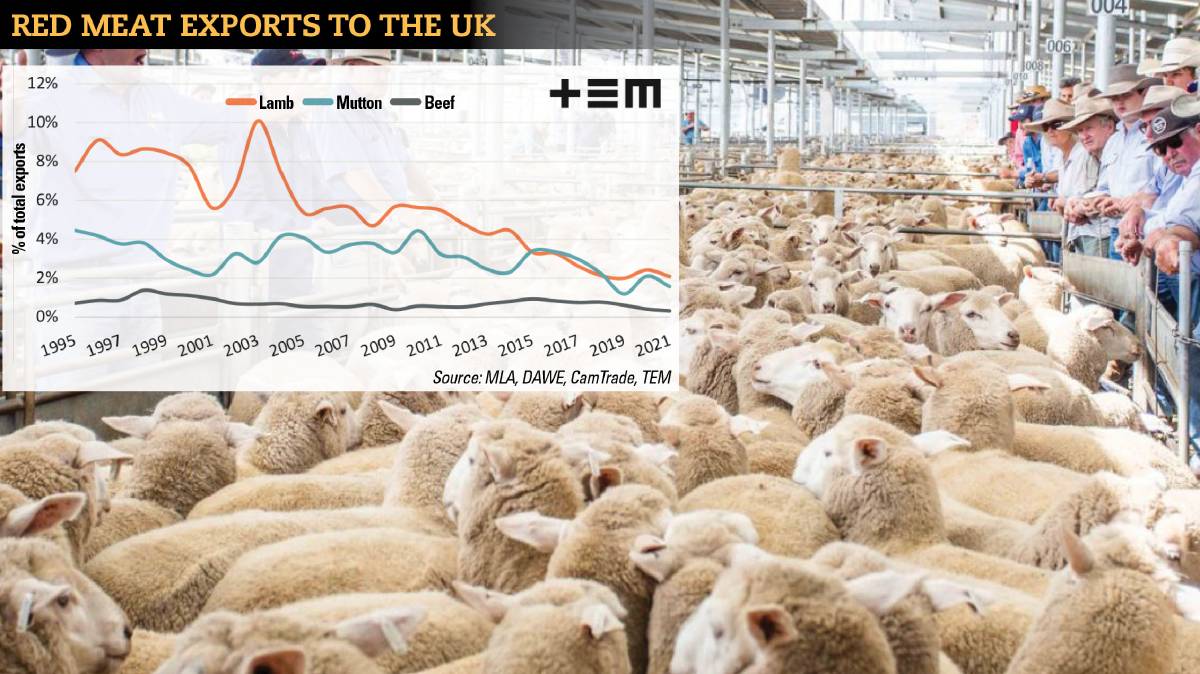 Australia's lamb and mutton exporters are well positioned to grow some real presence in the UK market with immediate access to a duty-free quota of 25,000 tonnes, rising to 75,000 tonnes in 10 years with the recent announcement of the Australia-United Kingdom Free Trade Agreement (A-UK FTA).

And although it isn't going to be an 'instant' manoeuvre, according to sheepmeat industry experts, the added market is another branch on the tree of an increasingly diversifying market space.

Thomas Elder Markets analyst Matt Dalgleish said while there has been no limit of uptake for Aussie sheepmeat from other export destinations, with diversity brings opportunity.

"We haven't seen a disruption to sheepmeat export destinations....China is still actively taking our mutton and lamb compared to other products.

"And Australia has been focussing on growing the Asian and North American markets, but the A-UK FTA will present another outlet with potential growth prospects which is a good opportunity for sheep producers."

In the last three decades the proportion of lamb exports to the UK as a percentage of total Aussie lamb meat exports has been on a steady decline moving from around 8pc of exports to 2pc in recent years.

Mutton exports have shown a more moderate decline, albeit starting from a base in 1995 just above 4pc of total mutton exports to dip below 2pc in the last few years.

Analysis of the last five-year average annual flows of sheepmeat (lamb and mutton combined) from Australia to the UK saw about 10,000 tonnes shipped each year over the same period, averaged across five years.

Under the new FTA there is a safe guard quota set for sheepmeat of 25,000 tonnes, but is scheduled to grow to 75,000 tonnes by the end of the decade.

Mr Dalgleish said based on these flows, while there is plenty of upside to grow the market, it won't happen overnight.

"At the moment, while we still have other places to send our sheepmeat and with low slaughter and a diminished flock constraining our supply, it's unlikely it will grow significantly quickly," he said.

"But over the next decade, as we move more and more towards those higher quotas, I think it's a great opportunity for the sheepmeat industry.

"As we have seen with other commodities, if you do have disruptions to one side of the offshore demand that's where the diversity helps, as the other sides pick up."

But just how much of these products are going to end up in the UK market versus the Asian market?

Director of centre for the study of agribusiness at Marcus Oldham College Dr David Cornish said when the UK shut their doors to Australian exports after joining the European common market, the industry was forced to developed a diversity of markets.

"We had to get off our backsides and find new markets and we found those new markets in areas that were growing, were close to Australia and we were competitive," Dr Cornish said.

"Now that we have got this new found trade with the UK, is that really where we are going to be sending our product versus these other markets which are continuing to grow?"

But he said although the A-UK FTA is not a saviour for the lamb industry, it may open up some interesting opportunities at that top-end for high value, high-premium cut products.

"While it might be only be a small amount, in the scheme of things it could make a significant difference to how we value the carcase," he said.

"The less reliant on one country, the better you are as there is less risk involved.

"So if we have another country in there that we can spread our risk, that's got to be good."