According to Numnuts founder Robin Smith, the rapid adoption of his product, which alleviates pain when tail docking and castrating lambs, shows that Australia is leading the charge globally when it comes to lamb marking pain relief.

Mr Smith said since the company's 2019 launch, they had seen phenomenal growth, with a 250 per cent increase in uptake each year.

"Last year we sold a million doses and this year we've made enough for about 2.2 million lambs," he said.

"It's showing great uptake by the early adopters, but there's still a huge way to go before we get to a significant proportion of the Australian flock.

"We estimate that somewhere between 1.5 and 3pc of the Australian flock are getting our product."

Mr Smith said when it came to lamb marking pain relief procedures, Australia was way ahead of many other nations.

"Australia has four potential pain relief solutions that have been available for many years and in most other countries they're lucky to have one or two, in many they have none because they're not actually registered there," he said.

"As long as the majority of farmers start to adopt it... Australia will actually lead the pack in terms of pain relief adoption, specifically in lamb marking."

Numnuts launched in New Zealand two weeks ago, but for Mr Smith's native UK, any potential rollout of the product remains distant.

"The irony is having launched it, we thought we would be able to get it out in the UK market but actually the very same legislation that the UK has [that drove the development] has prevented it from getting the product to market in the UK," Mr Smith said.

"There's a huge demand from farmers who want it but the legislation in the UK holds us back, one of the reasons being that you're only allowed to rubber ring an animal under the age of seven days in England."

Mr Smith suggested that Australian governments could provide more economic incentives for producers to adopt pain relief technology, such as a tax relief system, rather than simply turning to legislative options.

"In Victoria pain relief has been legislated for use of mulesing," he said.

"From all the vets that we talk to there's no logical reason why you would mandate pain relief for mulesing yet not for tail docking and castration.

"But there's, rightly so, some resistance from farmers on the legislation side. As soon as you legislate to do these things it can have unintended consequences, kind of like we're seeing in the UK."

"The information we have is that 86pc of producers who mules sheep use pain relief, so it's a very high adoption rate," he said.

"The issue from a welfare perspective worldwide is moving much further along the line around castration and other painful procedures and that's where we have less information about how many producers are using pain relief.

"It's one of the things we need to report in the Sheep Sustainability Framework but we haven't been able to get accurate data because of the way the questions were asked in the last survey of producers, it didn't allow us to really understand what producers were using with castration.

"There's a couple of very good options and what I'm hearing anecdotally is there's an increasing use of pain relief around castration and tail docking, but we don't have national figures at this stage."

Professor Allworth said they expected to be able to report more details about pain relief use for lamb marking in the first full report of the Sheep Sustainability Framework next year.

He said he believed incentives such as improved market access would help drive rapid adoption rates, particularly with international demand around animal welfare.

"Although you don't want to do anything that necessarily adds impost, it's highly likely that producers that are using pain relief will get a benefit in the short to medium term in terms of market access," Professor Allworth said.

"I think the adoption of pain relief around mulesing shows legislation is only necessary at the end where there's some people who aren't adopting what's best practice, but I think producers always have animal welfare at the top of their minds and where there's products available, they're usually going to adopt them." 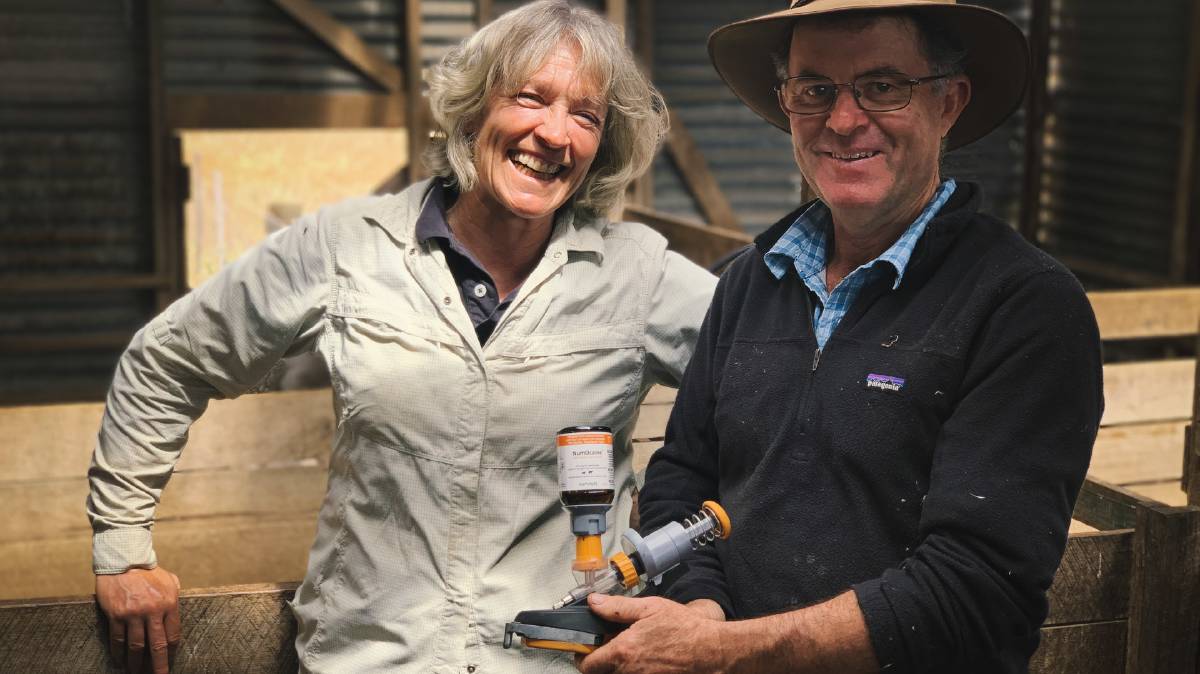 Rae and Lindsay Young, Lewisham, Tasmania, were early adopters of the Numnuts technology.

Tasmanian wool growers Rae and Lindsay Young have been using Numnuts on their farm, Lewisham, near Ross since it came onto the market.

The Youngs run 6000 to 8000 non-mulesed Merino sheep annually, depending on weather conditions and use Numnuts in conjunction with Metacam 20.

"We found in using the product it made a big difference to the individual animals in terms of them mothering up... just getting rid of that acute pain they experience during the rather brutal process of marking," Ms Young said.

"The Numnuts dulls that pain for the first hour and a half or so and then after that there's some discomfort and the Metacam 20 gives them two to three days relief after that.

"Animal welfare is foremost in the front of our minds... it's an issue for trying to market your animals and your wool but for us it's something we would do regardless of that.

"If any new pain relief comes on the market, we're always willing to try it.

Mark Hutchinson is a professor within the Adelaide Medical School and is the director of the ARC Centre of Excellence for Nanoscale BioPhotonics.

Along with the University of Adelaide's Davies Livestock Research Centre, Professor Hutchinson is working on a Meat & Livestock Australia-funded project looking at applying pain measurement technologies within livestock.

Central to the work is the concept that while acute pain is being addressed by producers, the practices of animal husbandry procedures likely create a state of chronic pain.

Researchers will look at drugs already approved in sheep in the hopes of finding agents that could also be useful in the treatment of the conversion from acute to chronic pain.

Professor Hutchinson is working with Numnuts to see if such an agent can be added to their product or used in conjunction with it to stop the conversion from acute pain to chronic pain.

"We've heard from industry this is an urgent need and it needs to be solved with the next 24 to 48 months... so the fastest way to do this is to repurpose an existing drug," he said.

"Whether that means that the next generation of product that might be used alongside of Tri-Solfen or Numnuts, whichever way you go, whether that's actually in the same bottle or whether it's just used to demonstrate it works well together, that's what we've got to work out from a practical perspective.

"We could spend the next 10 years trying to formulate the perfect, magical solution that does everything but that's 10 years of wasted time and lost productivity, so let's get something out as soon as we can, following all the appropriate safety and legislative frameworks."