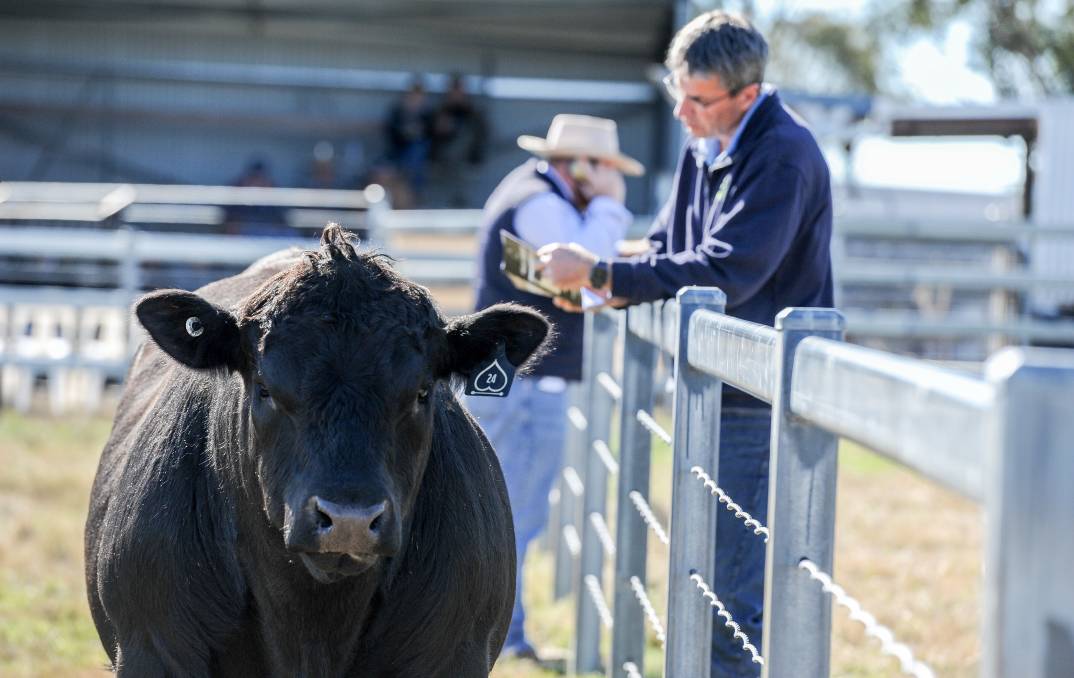 SIZZLING: Red hot demand is expected for bulls this season, which should push prices to new levels. PHOTO: Lucy Kinbacher

BULL selling season in northern NSW and Queensland has taken off at an incredible pace with averages doubled, new records set and few sales dipping below $10,000.

Agents and analysts believe averages could even out as much as $3000 above last year's rates by the end of the season.

Demand will be driven by commercial producers with cash in their pockets courtesy of a skyrocketing cattle market, seeking to embed genetic improvement and set themselves up to capitalise on a future pointing to strong ongoing demand for quality beef.

It was common for bull sales to average around $10,000 last year, which itself was a massive jump on the previous year when that sort of average was considered outstanding. So far, this year $15000 seems to be the benchmark.

It's early days still and agents say that average will likely come back a bit as supply catches up with demand.

Despite some big players out of the mix this year, particularly in the Angus breed, other seedstock producers have ramped up their offerings to fill the gap and there is no expectation of a shortage of bulls.

Nominations have been strong for national sales - in places, record numbers.

However, there's no doubting the red hot demand and that appears to be reason enough to go hard and strong at the start of the season.

Rockhampton-based Dane Pearce, Nutrien stud stock manager for the north, said sustained higher prices for cattle had given people the confidence to pay higher rates to secure the bulls they want.

"As well, there were people who sat back last year because the bull market was dear and only bought two or three and need many more this year," he said.

"That will add to demand pressure."

Mr Pearce predicted the better end and middle-of-the-road bulls would be where the biggest price hikes are seen, and it would be across all breeds.

"People rebuilding are trying to incorporate better genetics. They are striving to improve, in order to place themselves in the strongest position in the future. There is plenty of optimism about the future of this industry," he said.

On AuctionsPlus, average bull prices this year have been 20 to 60 per cent above last year's, apart from June which was an anomaly.

The trend sits perfectly with the overall livestock market - it makes sense the rising tide would lift the bull price as well, he said.

"We are also seeing a lot more activity from online users. There has been a 12 to 20pc increase in bidders registering online," Mr McRae said.

"The outlook is just so positive, and thus there is confidence. There is not much change to who is buying, or how many bulls they are buying, but they are definitely coming into sales expecting and willing to pay more.

"People have had 15 to 18 months of very good returns, the rain outlook continues to be good and bulls are seen as a long-term investment.

"For many, now is the perfect time to deliver the genetics boost to the herd people have been wanting to do for a long time."

How much to pay

While there are formulas doing the rounds on how to set a limit for a bull purchase, many producers are currently of the view that long-term breeding objectives will be more important than budgets this year, consultants report.

"If you need bulls to deliver certain characteristics in your herd in the future, you will have to pay what the going rate is," Northern NSW beef consultant Bill Hoffman said.

"Market trends are volatile anyway. Last season was a classic case. Everyone was chasing 'heifer bulls' and when that demand came on, the price of those bulls went very high.

"If you've decided, for example, a profit driver for your operation is IMF (intramuscular fat) and you chase bulls for that and a large sector of the industry has the same thought as you, the price goes up.

"Regardless, it still makes all the sense in the world to focus on the bulls that will deliver on the objectives you've set for your herd."

Mr Hoffman made the point that indexes produced by breed societies are calculated using a complex formulae and commercial values for certain traits are factored in.

"So if you use EBVs, some of that value is accounted for," he said.

Mr Hoffman, and other consultants, said many producers paid more than they anticipated for bulls last year, but have no regrets.

That would likely further fuel the sentiment this year that it is better to pay above expectations than to miss out.