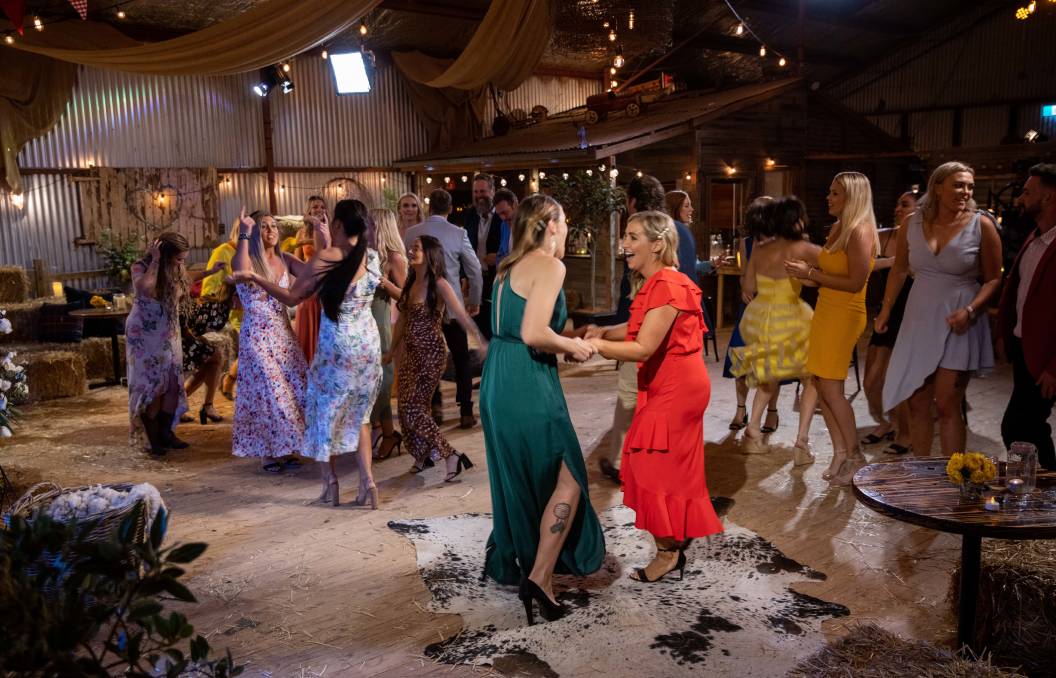 CUTTING A RUG: The lack of males did nothing to help with the awkward dancing at the country ball on episode 7 of Farmer Wants a Wife.

FWFWW 4: Ep 7: Heels are kicked up and fires are lit (literal fires, that is).

WHOEVER got the contract to supply festoon lights to Farmer Wants a Wife must have been grinning ear to ear.

They are hanging from patios, adorning hay sheds, lazily draped from poles in manicured backyards and generally in places of possible romance.

It is festoon lights again that help the mood inside the "barn" for the country ball which saw the farmers (plus Sam) and ladies spruce up to hit the dancefloor.

Farmer Will goes for the formal black hat this time and trots out the line: "We're going to have a ball at the ball" as he's walking out the front gate with his ladies. He says he's been thinking of that one all day.

Rob has another crack

ROB'S turfed his girls and gone back to his horse. This proves ironic as he ends up asking horse nutritionist Vici on a solo date where they'll gaze at each other while conversing about acid detergent fibre, textured feed, monosaccharides and polysaccharide storage myopathy.

He has a chat with Nat, or a Nat Chat, and the word "love" is mentioned nine times in the space of about a minute. "Connection" also gets a fair airing. 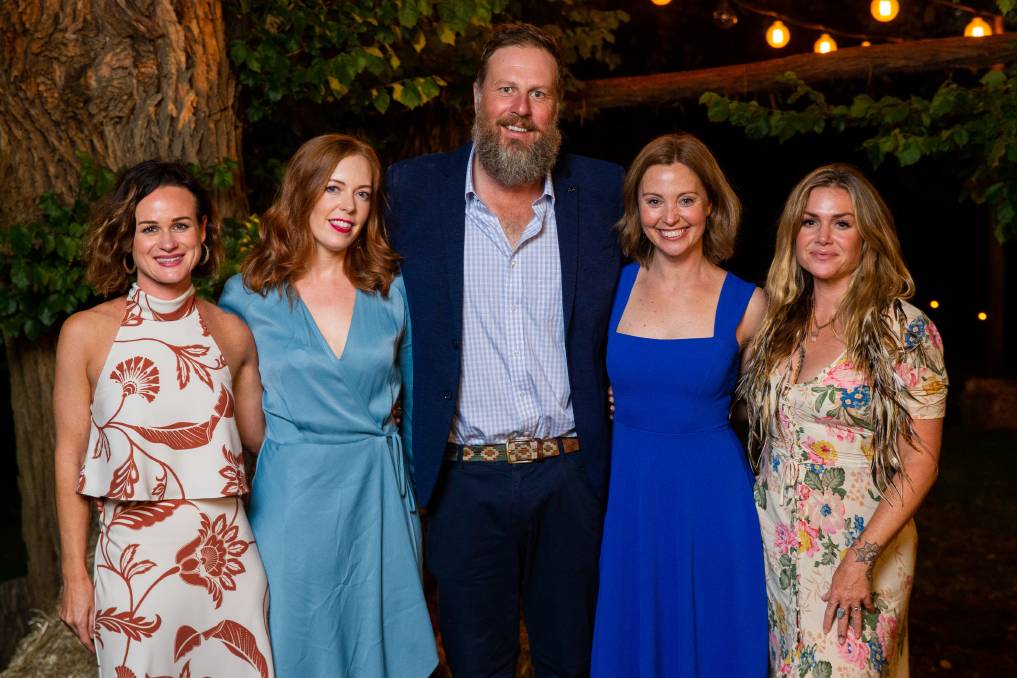 LINE UP: Farmer Beard... sorry, Rob, with his new draft of ladies.

When Farmer Rob re-appears, Farmer Will runs over to give him a hug, making many of the girls jealous that he hasn't shown them the same affection.

A quick fashion update at this point:

Off to the ball

AFTER a bit more sitting around and drinking, Nat declares it's time to get the party started. In order to do that, inside she introduces a former Toyota Star Maker winner. Is it potential candidates Lee Kernaghan, Gina Jeffreys, Beccy Cole, the world-conquering Keith Urban perhaps?

No - it's 2004 winner, Travis Collins, singing all of his hits... well, singing John Denver's Thank God I'm a Country Boy.

It does the trick though and everyone seems to know the words, even if they don't know what to do with their feet.

The overt mention of the Toyota Starmaker competition seems a little out of place, more like product placement. 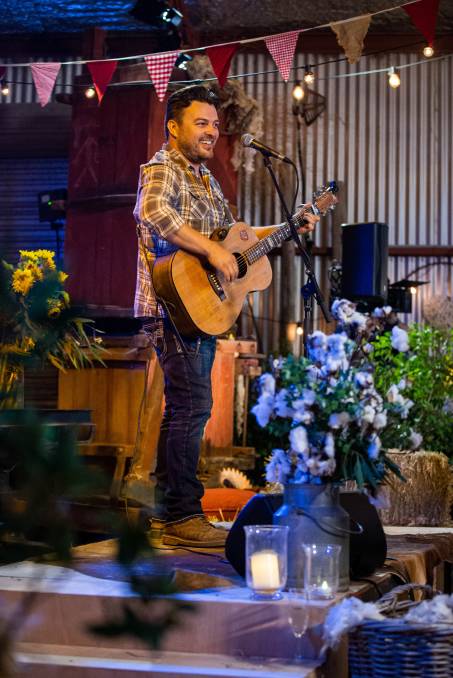 STRUMMING: The 2004 Toyota Star Maker, Travis Collins gets the boots scooting at the country ball.

About halfway through the episode, the puzzle clicks as an ad comes on talking about the Toyota Star Maker's history and support of the community, featuring none other than Travis Collins.

I wonder if aspiring country musicians are watching, thinking: "Boy, one day I could be singing at the producer/director's request to a small group of fame-seeking reality television participants."

The shed or facility hosting the ball is decked out in all things country, including a carefully placed not-by-accident older model Toyota LandCruiser in the background. Check.

When the dancing is underway and people are awkwardly bumping into each other, there seems to be a theme of trying to get "one-on-one" time with the chosen farmers.

At one point, there's a weird three-way waltz happening with Nickia, Chelsea and Farmer Sam.

Any minute I expect two new farmers in tuxedos to walk in straight up to the bar and order to "two very long glasses of ice cold milk, thanks mate".

I wait, but it doesn't happen. It would be a welcome break from the continual shots of people with grog. There are almost as many bottles and glasses getting around as there are festoon lights. And fires.

In fact, I ran a stopwatch for each time an alcoholic beverage could be seen on screen. It came in at bit over 12 minutes. Considering an episode is an hour, minus advertisements, that's getting up to a pretty high ratio of drinks in shot.

The country ball presents an interesting situation: Are the other farmers allowed to talk to the girls other than their chosen ones? There doesn't appear to be much cross-contamination here so possibly not.

Rob promised his family he wouldn't dance on television. Regardless of whether he's got a new wife or not by Christmas, there's a slim chance he'll be welcome to Christmas dinner having broken that promise and brought much shame upon the family.

It dawns on me that they probably couldn't have Lee Kernaghan playing at the country ball as it would have been a fashion faux pas to have Farmer Will there in a similar black shademaker.

Earlier, Jessica proved she struggles to do a dancing twirl in her canary yellow dress. She bizarrely attempts to make up for this later by hauling in telephone-pole sized logs to place on the large fire.

Each fire (and there are plenty) has an old comfy lounge near it. It seems a prerequisite for anyone who sits down to comment on how comfy they are. DRINKING: Just a bit more sitting around having a drink on the farm.

Chelsea, in her coat which appears to have been designed by the Jim Henson Company, is mad keen on "Farmer" Sam but can't seem to get a word in edgewise. She's gutted when old Sammy chooses Nickia for a solo date.

One of the ladies is talking to Farmer Rob about her interest in holistic health and embracing nature. Farmer Rob stares back and eventually says: "Ahhh, rightio." She won't be ready for remnant vegetation management any time soon.

In other milk-related observations, it seems Jess gets a bit confused and thinks Farmer Andrew is a lactose intolerant dairy drink when she says to him: "You're So Good."

No ad or placement for the tasty milk alternative appears, so I figure that should actually be: "You're so good."

She follows this up with: "You're awesome". This seems to have stunned Farmer Andrew to the point of breathlessness and Jess begins CPR. No wait, she's just gone in for a bit of suckface.

In keeping with my brief knowledge of other reality shows, I'm expecting a routine or ceremony when it comes to asking the ladies for a solo date at the end of the night.

Will roses be handed out? Will a low, slightly computerised voice announce it's time to go? Has the tribe spoken?

Nuh- the blokes just wander over and put out their hands, and lead their girls out through the maze of fires, festoon lights and comfy old lounges.

Farm Lesson of the Day: Fireside canoodling is improved with the assistance of an old lounge.