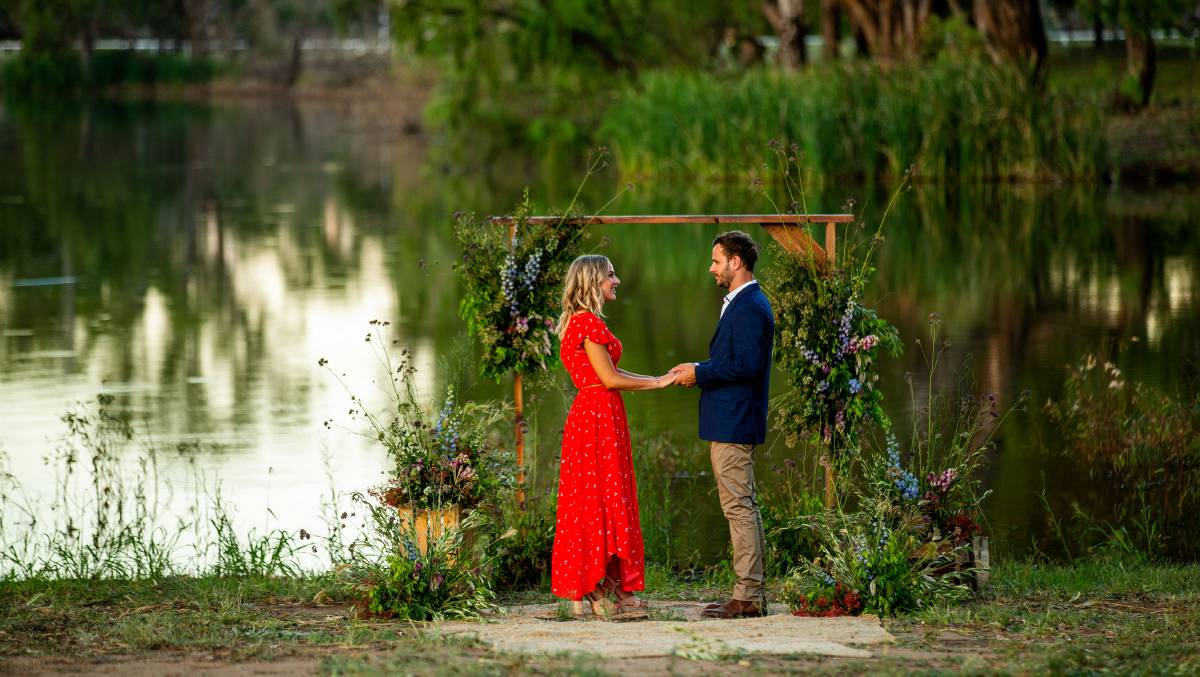 MOMENT: Tara (aka; The Return, aka, Boomerang Tara, aka The Terminator) and Farmer Matt at the all important decision arbour.

IT'S all led to this. This is the moment weeks in the planning. Dreams will be crushed, hearts will flutter and slow motion looks to the horizon will be plentiful.

Welcome to the seasonal finale of Farmer Wants a Wife 2021.

Each farmer (except "Farmer" Sam, whose search for love fell to pieces the night before when both his squeezes ditched him for lack of "openness"... and quite possibly not actually being a farmer) gets to visit the hometown of his final two ladies.

The recurring/nauseating lesson we learn by the end of the episode is that it's hard to tell someone you don't want them as your wife. This is resaid in various ways:

FARMER Matt heads to the Mornington Peninsula, Vic, to visit Tara and her family.

They have a pash-up near the coast. (Matt and Tara that is, not Matt and the entire family.)

Tara's mum says she hasn't missed her terribly but then gets all teary thinking about it - talk about mixed messages.

The shot holds on Tara's mum until she tears up. The shot goes for approximately 42 minutes.

Asked if the farm could support him and a wife, Farmer Matt says it's currently supporting three families.

Tara apparently wants to create a large dog farm. That should be a red flag, right there.

THE every-ready Farmer Rob pulls on his gumboots like a well-knowing cattle buyer heading to wet saleyards and heads to Byron Bay, NSW to visit New Age Vici at her jungle bungalow, which shall now be referred to as a "jungalow".

The jungalow has an outdoor shower and is quite possibly surrounded by circling bull sharks. That's not going to be great for its AirBNB rating.

Inside the jungalow it's like the Jenolan Caves with stalagmites littered everywhere.

Rob comments on the number of crystals: "There's quite a few in here."

Vici replies that it keeps the energy clear. Farmer Rob says: "The energy in the house?" with a puzzled look. They both laugh but underneath, the now barefoot Farmer Rob is searching for a kayak to escape and New Age Vici's aura has gone red with rage at the questioning of the power of the crystals. She may have placed a crystal curse on him.

As if the swamp and jungalow couldn't get any more "deep south", Rob whips out a harmonica to add to the bayou feel with a few mournful bars... as if he's preemptively singing the blues.

It's hoped Vici would reciprocate on a banjo but that doesn't happen.

IT'S off to Victor Harbour, SA, for Matt in order to meet Alex and her family, particularly her highly admired Nan. 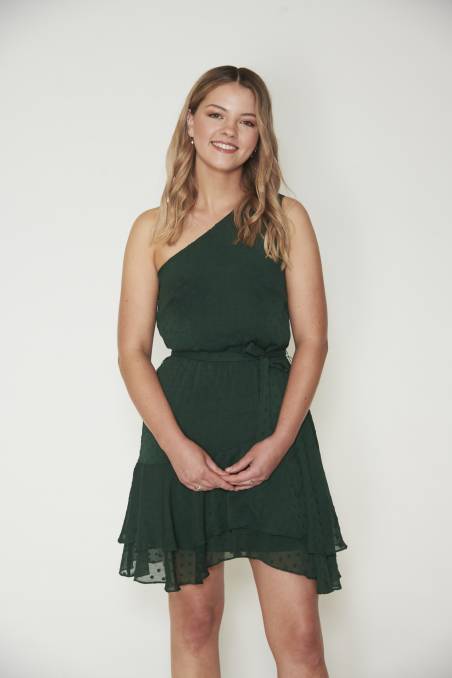 Nan gives Farmer Matt a grilling. Nan may also be a comic book superhero known as Black Panther as she appears to be wearing a necklace from the mythical land of Wakanda. Could this episode of FWAW be part of the Marvel Cinematic Universe? Anything is possible when it comes to love.

All seemingly goes well at the visit.

FARMER Rob heads to Adelaide, SA to meet Kate and her clone - Kate 2.0, who is also her twin sister.

Kate 2.0's husband is here wearing a jacket that was rejected as the Australian Olympic team jacket from the 1992 Barcelona games.

Farmer Rob comments on the jacket. He has filed it alongside Vici's crystals in his mind palace under "erase from memory".

IT'S not a wedding but there appears to be a "decision arbour". Crazy millennials.

In short, Matt punts the sensible, well-spoken, pretty Alex and opts for Runaway Tara, who is not Alex, if you get what I mean.

Tara puts her words... together... much more... gooderer.

"I'm excited to see what the future holds for us," Tara says. That future could hold sheep crutching when they get back to the farm so strap yourself in for that. BONUS: Bounce-back Tara and Farmer Matt after their decision. Matt is clearly thinking he can't wait to get her back to the farm and teach her to crutch sheep.

In a post-decision interview, we see the descent of Alex into becoming a jilted, inward looking rage monster who only considers herself when she says she is "going to put Alex first from now on".

Actually, it looks as though she just leaves quietly to get on with life, of which she's only had 22 years of so it's not like her world has ended.

TRUE to form, Rob ditches both his girls, using the old "we've become good friends" line again, as he did with the first draft of ladies.

Kate, a psychologist, takes it in, and departs.

Vici however, after being told to get on her horse, lets the moment hang like a carcase in a cool room, only this is probably about 40 degrees colder.

Her feathers, the ones in her hair, are ruffled.

Rob says he knows what he is after and unfortunately he's not after a horse nutritionist with feathers in her hair, a crystal around her neck (quite possibly an Infinity Stone, if this episode IS part of the MCU) and a jungalow to call home.

The nation is certainly going to miss Rob's laugh, that's for sure.

FARMER Andrew has fulltime hat hair. It had to be said. It can't be the humidity of Brisbane where he's flown to in order to visit Ash, because his hair is like that all the time.

Andrew's gone for a checkered shirt for something different and kicks off with an apology. It's a bold move. They then play shuffleboard. Andrew gets whipped.

Ash says: "If he doesn't see that I'm perfect for him, open your eyes."

Andrew doesn't tend to make a lot of eye contact, so perhaps that's the problem.

Ash's brother comes in and tries to be intimidating. The moustache, which he possibly purchased from the gag section of Toyworld, is not helping. He could also be Chris Lilley in disguise.

In the ad break, we are shown a trailer for the new Channel Seven series, RFDS, which appears to be a revamped take on the old Crawfords production, The Flying Doctors, except with Brax in it from Home and Away. Looks dramatic.

TO raise our hopes in the belief of happy endings, Will goes and visits FWAW alumni, Rob and Jo from series whatever, who got married and have three kids.

They were the ones that originally nominated Will to go on the show. Their small talk is small and adds nothing to the program.

He then goes to Melbourne (cue coffee reference in first 30 seconds) to see Jaimee.

Jaimee is from Canada and she introduces him to both her friends and a popular Canadian drink called a Caesar, made from tomato juice and vodka.

"It's certainly something," Will says.

Will has worn his boots inside the house. That's a social faux pas and perhaps an indicator he doesn't intend to stay long or bother making too much of a good impression.

FARMER Will rides on over to Mount Gambier, SA to meet Kristina.

First impressions? "Cows in the front yard. Perfect," he says.

At some stage Kristina's family seems to have killed a peacock as there is a jar of tail feathers in the kitchen. And you know what they say about killing a peacock.... actually, that's not a thing so ignore that.

"You're a real cowboy aren't ya?" Kristina's mum replies when Farmer Will hands her flowers. Is giving flowers a usual cowboy procedure?

It's lamingtons (highly likely purchased from an IGA where Shane Jacobson shops) on the menu with a cuppa for smoko.

Not sure Farmer Will's a lammy man. He strikes me as more of a snot block bloke, but it's too late now.

IN a ominous sign, Andrew is wearing Qld maroon, the home state of Ash, for his visit to Jess in Melbourne. They converse intensely.

"I don't think anyone could fully understand it until they are in it," Andrew says. Yes, when most blokes find themselves in the common situation of stringing along four potential partners, we will fully understand.

Jess's friends ask Andrew if he is Jess' penguin. She then over-explains that penguins have one life partner.

And here I was thinking they were off to a Batman cosplay function.

Compatibility is the topic of conversation as Farmer Andrew trots out this pearler: "Just because I think I'd be slightly more compatible with Ash, doesn't mean I'm not compatible with you."

As she is accustomed to do, Jess walks out. Check. COUPLED: Farmer Will and Jaimee after their big decision, eh.

FARMER Will's got a couch in the middle of a field of wheat. Pfft- who hasn't?

It is dangerous though because, as most pest researchers know, old colonial-style couches are a haven for harbouring fall armyworm. Luckily the paddock is mostly stubble.

Many are hoping Farmer Will whips out a black guitar and thrashes out "Boys from the Bush". He's got the hat in place and it's an opportunity to circle back to the Toyota Star Maker sponsorship reference from an earlier episode, but to no avail.

He sits Kristina down and after a long spiel serves up: "My decision is not for you, sorry."

Kristina goes him with a pig hunting knife. Kidding - no she doesn't - she leaves.

Farmer Will goes with his gut and his gut picks Jaimee, complete with Christmas wreath earrings and the visible mottled back sunburn no-one is talking about.

FARMER Andrew is talking to Ash.

"Love can't be forced and it just comes naturally," he says. "But my heart belongs to someone else."

Ash looks like she could pick Farmer Andrew up and pile drive him into oblivion but she doesn't.

Unbelievably, Andrew signs up for Jess. Yes Jess - the two-time walk out and useless sheep drafter. You can hear viewers react across the country. In the distance, what could be mistaken for a good old tin-kettling to welcome the couple home, is actually a mob forming in the streets. Farmer Andrew says he never wants to be separated from Walk-Out Jess and he drops the L-Bomb - that's "lambing" which is just around the corner so she's got a lot to learn before then.

So everyone's made a decision, of sorts, and it's a ratings winner.

Just when we realise we've all been had by the cunning and crafting emotional editing that is reality television, another bombshell drops in that we'll be forced to wait until after the Olympic Games (17 days away) to watch the big reunion episode.

That mob in the streets just got a little bigger.

There are so many things we want to know:

Be assured, loyal readers, we will return to cover it all and more.

In the meantime, look out for our one-off podcast tomorrow as we wrap up what we learnt from this season of Farmer Wants a Wife.