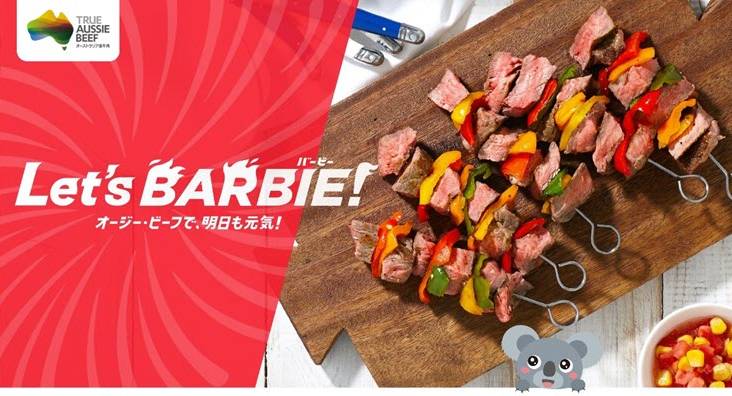 ON FIRE: Meat & Livestock Australia's summer steak marketing campaign in Japan has this year broken records in terms of engagement with consumers.

Beef export volumes down as herd is rebuilt, but signs are Japanese demand is hot

JAPAN has regained its crown as Australia's number one beef export market volume-wise.

Financial year data now in from Meat & Livestock Australia shows China's purchases dropped 51 per cent in 2021/21 to leave it in fourth place after being the largest customer in the previous year.

A total of 908,132 tonnes shipping weight was exported to global markets in the past financial year, back 25 per cent on account of reduced supply as Australia rebuilds its cattle herd.

Japan took the largest helping at 243, 354t, followed by the United States and South Korea.

Of the top ten markets, South Korea and the Middle East and North Africa, known as MENA, took volumes that were up on the previous year.

Values were equally back 25pc across the board, although there was a boom in values of exported Australian beef found in Vietnam, Hong Kong, UAE and Saudi Arabia.

The US took 33pc less, with volumes substantially down in the second part of the financial year, particularly for manufacturing product.

MLA analysts say that is in response to a combination of factors including a higher Australian dollar, high cattle prices in Australia plus increased US domestic supply.

In addition, the US has increased imports of chilled beef from Canada and frozen boneless from Brazil this year at significantly lower unit prices than Australia's.

MLA's regional manager North America Rob Williams said beef retail prices were easing in the US, down from the peak during the pandemic and over the summer grilling season.

"However, they remain historically high and food inflation is a major concern at the moment," he said.

"The demand for beef is strong, and with the opening up of food service, competition is tough."

Mr Williams reported the US processing sector was essentially back to normal after the COVID-induced disruptions from last year, with one of the biggest challenges being access to skilled labour.

In addition, cow slaughter was high due to significant drought, especially in the south west of the country, and indicators were the herd was entering a liquidation phase, he said.

In China, both New Zealand and the US have taken advantage of Australia's reduced supply, supported by NZ's tariff-free advantage and US sole approval to supply hormone growth promotant beef, MLA reported.

Kiwi beef exports to China overtook Australia's volume share in December and US volumes have increased rapidly to overtake Australia's share for the first time in May.

Over all the red meat categories, however, China is still Australia's largest export market, boosted by a whopping 30pc lift in mutton exports year-on-year.

All signs are that Japan's taste for Australian beef is continuing.

"The lift in beef export volumes to Japan see them cement their gold medal placing as the top destination for Aussie beef with 27pc of the market share of total beef exports from Australia in 2021," TEM's Matt Dalgleish said.

This year's summer steak campaign run in Japan by MLA included nationwide television coverage during the Olympics and a pop-up Aussie Beef Clubhouse near to the Games.

It has notched up a record reach of close to 50m for the television advertisement and a whopping 87,663,246 overall in media coverage.

The 'Let's Barbie! Stay Genki with Aussie Beef Tomorrow' campaign kicked off in early June and will continue until next month.

It promotes purchasing and cooking thick cut steak at home while encouraging a healthy, active lifestyle.

MLA is an official partner for the Australian Olympic and Paralympic team in Japan, so the campaign was positioned alongside that to ensure Australian beef gets maximum exposure during the event.

The Beef Clubhouse was about bringing the experience of Aussie style barbeque directly to Japanese consumers.