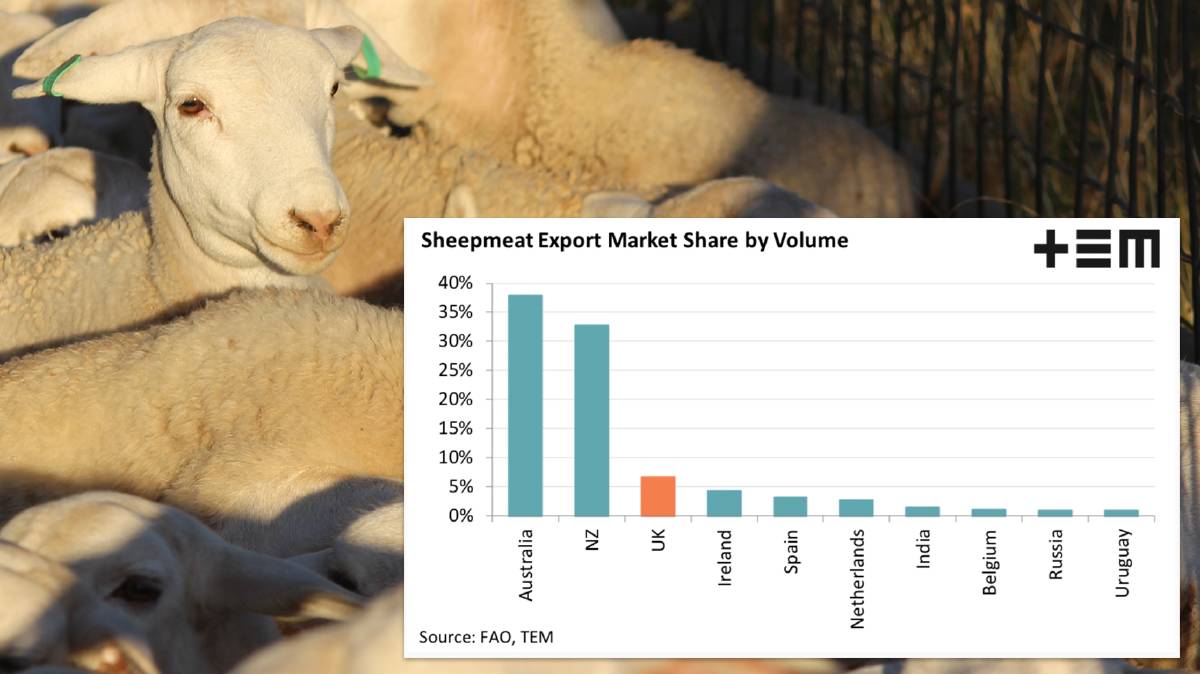 Globally, the UK are the third largest sheepmeat exporter and the fifth largest producer of sheepmeat.

Australia's stronghold on sheepmeat exports into the US could be about to lose its grip, as a three-decade long ban on British lamb exports gets a green light.

Australia's stronghold on sheepmeat exports into the United States could be about to lose its grip, as a three-decade long ban on British lamb exports gets the cut.

Last week US president Joe Biden lifted its 32-year ban on sheepmeat exports from the UK, putting them right back into the game.

The US had banned the import of British beef and lamb since 1989, as a result of bovine spongiform encephalopathy (BSE) or 'mad cow disease', although the ban on beef had already been lifted.

In 2020 Australian sheepmeat exports to the US totalled 78,584 tonnes shipped weight (swt).

Analysis of the proportion of the global sheepmeat trade shows that Australia and NZ dominate the export market share, with the UK holding third position in export volumes at around 7pc of the share of trade.

The UK are the fifth largest producer of sheepmeat globally and are the third largest sheepmeat exporter.

But UK farmers are already planning a rebuild of British lamb consumption in the US, telling one British news site, cityam.com "the key to getting the US consumer market going will be to get a really good eating experience, and to know and understand the credentials of British lamb".

These include the sustainability of grass-fed livestock and carbon storage in pasture, and high welfare standards.

Chief executive of the National Sheep Association, and a sheep farmer with a smallholding in South Gloucestershire Phil Stocker said British farmers were delighted by the announcement.

"It's good news, it's something we've been waiting for a long time," he said.

"It will allow British imports of genetic material from sheep to the US industry and get some high-quality lamb products in there and help them rebuild that interest in lamb and mutton and sheepmeat as a food in the US."

But according to Thomas Elder Markets analyst Matt Dalgleish, there are strong signals the return of British lamb to the US may not be as bad as it sounds.

"There is one factor that needs to be taken into account and that is the UK's appetite for imported sheepmeat product," Mr Dalgleish said.

"Annual trade flow data highlights that for much of the early 2000s the UK imported more sheepmeat than they exported.

In 2019 the import to export ratio in the UK was the lowest it has been on record, yet still managed a healthy 64pc.

"Entering the US market will mean either reducing UK export volumes to their other key trading partners such as France, Germany and Ireland or it will mean there is less product available for domestic consumption therefore lifting the sheepmeat import volumes into the UK," Mr Dalgleish said.

"Either way, this will provide opportunities for dominant global sheepmeat exporting nations like Australia and NZ."

Aussie lamb exports rebounds as demand from China and US lift

Mr Stocker said after the domestic market, which takes 60-65pc of UK production, the EU is still their largest export market.

However, he said access is more difficult than it was when they were part of the EU.

"It's essential to maintain EU access, but is also important to work on any market that gives us future potential," he said.