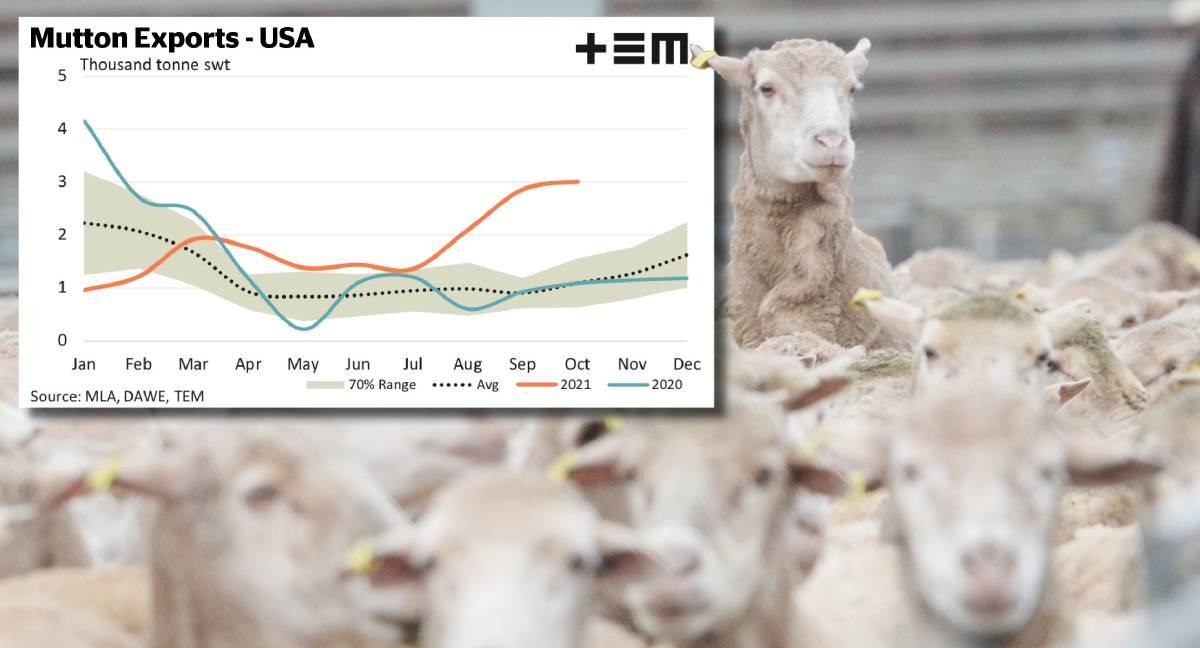 Demand for Aussie mutton from the US at all time high as the taste for international cuisine grows.

Australian mutton exports are skyrocketing to the United States as their international cuisine appetite grows in popularity.

For the second month in a row, the demand for Aussie mutton from the US has increased dramatically with 3008 tonnes reported to be exported for October.

And for the season so far Aussie mutton exports to the US are running 44 per cent above the average trend.

According to MLA an increased interest in international cuisine and upscaling traditional American fare has been driving mutton and lamb menu placements recently.

They reported strong growth in popularity of ethnic cuisine is likely to be a key tool in driving both mutton and lamb usage over the next few years.

But is seems not all proteins have faired as well with mutton and goat lifting at the expense of beef and lamb.

Overall exports saw mutton and goat increase by 3pc and 4pc, respectively, largely driven by the US and Canada, with mutton exports achieving 14,403 tonnes shipped weight (swt) for the month.

Beef in October achieved a total of 74,333 tonnes swt, down 6pc from September levels.

And lamb declined by 10pc to 19,726 tonnes swt - the lowest level since January this year.

"A five per cent lift in October on the already incredibly strong volumes in September puts current mutton flows for October 176pc above the normal five-year average seasonal pattern for this time in the year," Mr Dalgleish said.

"China also saw increased mutton flows from Australia during October with 6268 tonnes reported, a lift of 15pc on the previous month."

But despite the increased appetite by Chinese consumers for Australian mutton, the slightly softer flows to China than normal and much weaker trade to the 'other' destinations have offset the super strong US demand to see total mutton exports trek sideways for the month.

In fact, the monthly volumes slipped under the average trend by 15pc as we normally see Aussie mutton flows to China peaking in November.

Lamb, mutton top of the tastes for the US

According to MLA mutton trade to other destinations (excluding USA and China) remain subdued with volumes easing by 9pc in October to see 5127 tonnes swt consigned, mirroring the levels seen during October 2020.

Normally at this time of the year volumes are closer to 8200 tonnes, as highlighted by the five-year average pattern for October, so other destinations are running 38pc below trend.

Typically, October is the largest or second largest month for Australian lamb exports, highlighting the significance of recent figures.

MLA data shows dwindling lamb slaughter volumes in October contributed to the demise, along with processor disruptions and a delayed spring flush, despite numbers lifting by 23pc since September.