Old wooden wool classing tables are getting a new lease of life, as more and more people choose to make them a focal piece in their home.

Furniture maker Jason Porter from Cecil Plains in Queensland has seen the number of wool classing tables coming through his workshop to be transformed into glass-topped dining tables grow in recent years.

Mr Porter said while the trend wasn't a new one, interest did seem to be on the rise.

"I think the trend has always been there but perhaps it's more accessible to people now, they know a few people doing it," he said.

"Every person who has brought one in has had a country background so I guess it's part of their identity.

"People want to have that country feel in their house and you're definitely going to get that feel with a wool classing table in your home." Through his business Porter and Wood, Mr Porter said he received lots of inquiries about if he had any ready-made restored wool classing tables in stock.

"You've really got to either have a property with one on it, with an old wool classing table in the back shed or you've got to know someone who's getting rid of one," he said.

"It got to the point where so many were asking if I had some that I have told people that I can make one from scratch using recycled rough sawn timber to replicate the old look.

"Some people still want one that has actually come from a woolshed, rather than a replica.

"I'd love to know exactly how many are out there but there's certainly still a few around, hopefully they all get done up eventually."

Turning the old classing tables into signature pieces of furniture requires a bit of skill, with them commonly arriving wobbly and with some timber in need of replacing.

Using both modern and traditional woodworking techniques along with modern glues, Mr Porter is able to turn them from pieces he describes as "simply made" to conversation starter pieces that are made to last generations.

He prides himself on reusing old bolts to maintain the heritage feel of the pieces but takes a more modern approach to the glass tops by reconfiguring the table.

"What I want to make sure is the glass top is recessed somehow into timber so you don't have the exposed corners of the glass on the tabletop," he said.

"I can generally restore one within two weeks and once they're restored they're better than they ever were.

"I've got one in there at the moment that just needs glass for a couple in Condamine, I've got one from Roma and I'm doing another two from Shane Webcke, from a woolshed that he's turning into a wedding venue." 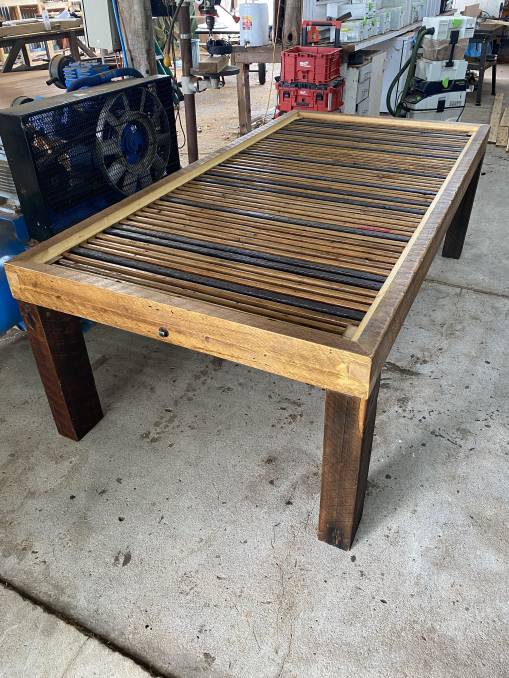