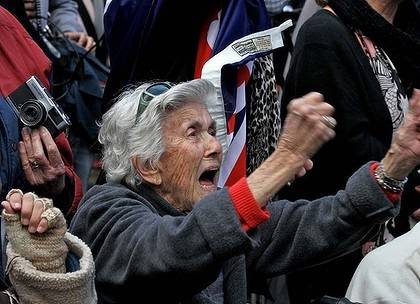 ''People are saying no, they don't want it'' … a protester at the anti-carbon tax rally in Sydney. Photo: Ben Rushton

THE world didn't end yesterday but Australian democracy died, according to protesters who gathered to make their voices heard in opposition to the carbon price.

THE world didn't end yesterday but Australian democracy died, according to protesters who gathered to make their voices heard in opposition to the carbon price.

About 2000 people marched from Sydney's Hyde Park to Belmore Park to hear Bronwyn Bishop speak against the government's Clean Energy Bill, while a much smaller group in Melbourne heard the broadcaster Alan Jones refer to climate change science as ''propaganda''.

''The notion of global warming is a hoax,'' Jones told a group of about 150 people on the steps of the Victorian Parliament.

''This is witchcraft. Commonsense will tell you it's rubbish; 97 per cent of all carbon dioxide occurs naturally … 3pc around the world is created by human beings.''

Jones's station, 2GB, was reprimanded by the Australian Communications and Media Authority last month, after he made multiplication errors in his calculations about atmospheric greenhouse gas levels.

In Sydney, Ms Bishop said the government was trying to use climate change to hold onto power.

''The government is trying to frighten the nation into accepting the need for it, but the Australian people are saying no, they don't want it,'' she said.

Ms Bishop and a Liberal MP, Craig Kelly, repeated the opposition's line that MPs would swear a ''blood oath'' to repeal the carbon price legislation immediately after the next federal election, should the Coalition win government.

''The worst thing they're doing is that they're scaring our kids,'' he said.

The protests were far smaller than last year's rallies in support of a carbon price.

Meanwhile, sea ice in the Arctic melted at a record pace last month, according to the US National Snow and Ice Data Centre.

Measurements taken on June 18 showed the area containing sea ice had shrunk to 10.62 million square kilometres, about 31,000 sq km lower than the previous record for that day, set in in 2010.

The driving force behind the current fast melt was regional weather conditions, the agency said, including warm winds that were sweeping north from east Asia.

The loss of Arctic ice presents a massive problem for attempts to contain dangerous climate change at safer levels, because the white ice reflects light and heat away from the Earth's surface. The smaller the ice cap, the less heat is reflected away, and the warmer the water, leading to further loss of ice.