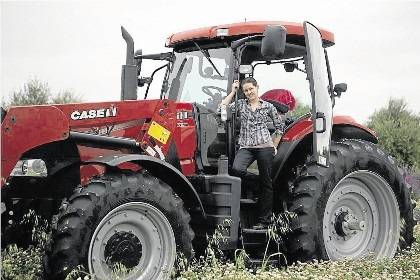 Marlee Langfield is ready for whatever opportunities come her way.

WHEN Marlee Langfield’s father Thomas died in 2008, he left his daughter with a love of the land, an aptitude for farming and an inner strength that makes her seem more mature than most 15-year-olds.

WHEN Marlee Langfield’s father Thomas died in 2008, he left his daughter with a love of the land, an aptitude for farming and an inner strength that makes her seem more mature than most 15-year-olds.

Mr Langfield ensured the 1000-hectare cereal cropping farm, Wallaringa, near the NSW Central West town of Cowra, would pass directly to Marlee (pictured), allowing her to decide in her own time whether farming was in her future.

In the meantime, the farm is being managed by Mr Langfield’s nephew Rod Wright.

Marlee is actively involved in running the farm, along with Mr Wright’s sons Joshua, 17, and Nathan, 16.

“The boys are like brothers to me as I don’t have any siblings close to my own age,” Marlee said.

“Rod makes all the farming decisions at this point because I’m not in a position to do that at the moment.

“It’s hard when you’re not sure what you’re doing but when Rod’s around he demonstrates and explains what to do so that I’ll know next time.”

Mr Wright is proud of Marlee’s positive attitude and enjoys playing an active role in preparing her for a farming future.

“Marlee’s ability to adapt and adjust is absolutely remarkable,” he said.

“We’ve tried to maintain a family farm atmosphere, which means that Marlee is getting the hands-on training she’ll need if she decides to continue with a career as a farmer.

“She has great practical skills as well as an ability to take on board new techniques and innovations.

“She’s very talented and, operationally, I would say she’s better than most boys her age.”

Marlee doesn’t see her gender as an issue or an obstacle to a future in farming and says the ability to work alone as well as with others is one of the most important character traits for a successful farmer.

“It can be lonely spending endless hours on the tractor during sowing or on the header at harvest; I just sing along with the radio for company,” she said.

“You have to be fearless, too.

“You can’t be afraid of much or it’ll hold you back.

“I’m very outgoing and capable in that way – not much really worries me.

“The best part about farming is the freedom it gives you.

“You’re surrounded by big open spaces and you can just grab the dog and hop on the motorbike or in the ute and go for a drive up the paddock to check the crop, repair a fence or measure the rain.

“I’ve definitely inherited a love of the land from Dad.

“He grew up on Wallaringa and helped farm this land with his parents, brother and sisters and then on his own.

“Now Dad has passed it on to me.

“I never really thought actively about whether I would take over the family farm; it was always just there.”

To help prepare her for adult life, Marlee is now doing part of her high school education in Canada, where she is checking out the Canadian farming scene.

Her mother Wendy said it was important for her daughter to gain as many experiences as possible before deciding to settle into farming.

“And, of course, she may decide not to come back to the farm,” she said.

“Marlee has plenty of opportunities ahead and this experience will definitely benefit her.”