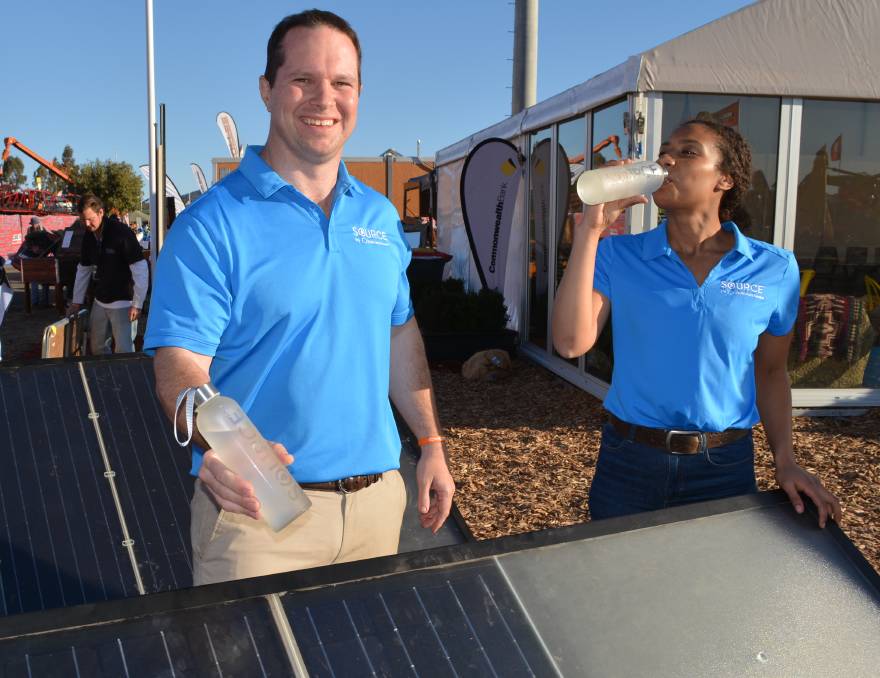 Up to 10 litres of free, fresh drinking water is extracted from the atmosphere every day by a standard solar-powered Zero Mass Water unit.

Clear skies are generally bad news in the middle of a drought, but sunny weather has at least one upside for moisture-stressed farm families and regional communities.

Fledgling US company, Zero Mass Water, is making a splash in dry rural Australia with solar powered technology which literally makes water from thin air for households where rain-fed supplies are diminishing rapidly as drought lingers.

Fresh drinking water is extracted from the atmosphere at an average rate of four to 10 litres a day by a roof-mounted twin solar panel array.

Our business is based in Phoenix in the middle of the desert – a dry climate like Broken Hill's – and I drink this water every day - Rob Bartrop, Zero Mass Water

“It’s a great complement for tank water on farms or in small communities where the only other alternative in dry years is buying in a tanker load of potable water, or bottled supplies,” said Arizona-based expatriate Australian, Robert Bartrop.

While droughty weather may not deliver much rainfall to replenish tanks on farms, or at small rural schools and community venues there was enough moisture in the air to constantly keep drinking water supplies topped up.

“Our business is based in Phoenix in the middle of the desert – a dry climate like Broken Hill’s – and I drink this water every day,” Mr Bartrop said.

More humidity in the air helped, but sunny weather, rather than moisture-rich cloudy conditions, was actually a bonus because the solar-powered “Source” extraction units were able to work longer.

Water vapor was pulled from the air by a fan and passive absorption via a unique hygroscopic concept, filtering out any dust or pollutants.

In fact, the process is so good at removing impurities the water then needs to pass through a mineral adding chamber, making it comparable to conventional bottled or spring water.

Although the Zero Mass company is just four years old it has taken the bottled water market head-on in the US, particularly in areas where the quality of well water supplies fluctuates.

In South Africa, thirsty Cape Town, which went close to relying on imported water, has been a busy marketplace for the company, as have other parts of southern Africa.

Unlike other commercial scale atmospheric moisture extraction units, the Source water unit does not need access to mains power and is not energy hungry.

In Australia, where the company only officially launched late last year, units have been trialled and installed from Lady Elliot Island in the Great Barrier Reef to Kangaroo Island in South Australia, and numerous other remote locations in between, even the Muswellbrook indoor sports centre in NSW’s Hunter Valley.

He grew up at Adelong in southern NSW and has a good understanding of what life on tank water is all about.

“Generally there’s still likely to be access to bore water or maybe a dam or river supply for showers and toilets, but the quality isn’t too good for drinking,” he said.

“We’re certainly not anti-tank water, but we are anti plastic bottles.

A basic $7000 two-panel solar array contains 60 litres of storage capacity where water is mineralised and kept clean, but surplus can be redirected into other tank systems.

There is no limit to the number of panels which can be installed, although installation must be done by a registered professional.

An ozone-based self cleaning and monitoring process maintain water quality in the hydropanels.

Mr Bartrop said while the past year’s escalating drought conditions had made the company’s launch in Australia more topical, even in average seasons people generally recognised Australia’s fresh water limitations.

“Australia is a very dry place and people in rural areas, particularly farmers or those in isolated small towns, are well aware of the need to be prepared for clean water shortages,” he said.

The company’s rollout has been financially supported by Commonwealth Bank of Australia which has been happy to help promote Zero Mass Water as a practical solution to the drought for those in areas struggling through many frustrations thrown up by the big dry.

Mr Bartrop’s previous business experience had been with large scale solar power generation projects, including developments feeding the electricity grid at Geraldton in Western Australia, and in NSW at Broken Hill and Nyngan (the state’s biggest solar farm).

“There’s been a lot of technological innovation in energy and communications in Australia in the past decade, but large scale water management continues to be very much centralised or reliant on plastic bottled supplies,” he said.

“Developments like Zero Mass units provide scope for regional consumers to get better quality and for others to break their reliance on municipal or bottled water, without an environmental cost.”

Sponsored by
Another exotic pest has been confirmed in Australia, but officials are confident it will not be as damaging as Fall Armyworm.
Test
Shearers go for gold, lobbying to see it considered at the 2032 Olympic world stage.
Test
Exporter Wellard forced to run principal banking offshore.
Test
Consumer watchdog ACCC and food regulator take the side of vegan food makers
Test
Flystrike vaccine labelled a "game changer" as funding boost fast tracks further investigations.
Test
'Lucky escape' for south-west farmer.
Test
High futures prices will underpin our cash market at well above $300/t.
Test
Researchers are delving into how legume pasture systems can improve sheep production and are looking for more producers to get involved in the project.
Test