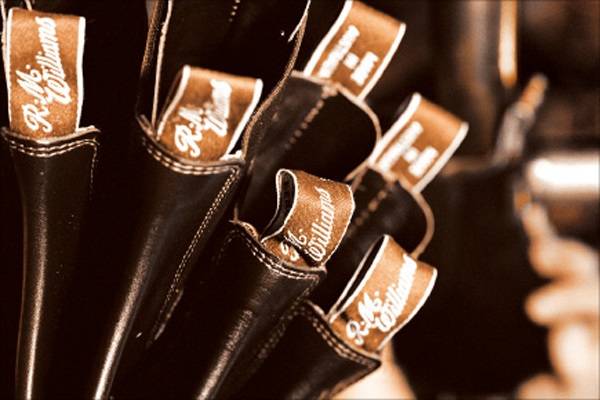 The 87-year quintessentially Australian "bushman's outfitter" is on the market, with speculation suggesting the $110 million investment made by private equity fund L Capital Asia in 2013 and 2014 could now be worth about $500m.

LVMH's interest in RM Williams has seen its classic elastic-sided boots marching out of its Salisbury factory in Adelaide to an increasing array of offshore markets, including high-end retail precincts in Europe and North America.

In recent years the company has opened stores in Austin (Texas), New York, Los Angeles, Copenhagen and London, and it boasts about 50 Australian retail sites.

Leather goods and apparel sell to retailers in 15 countries, plus via mail order, and the iconic Australian brand is set to launch into China next year with stores in Beijing and Shanghai.

RM Williams recorded sales revenue of $142 million in 2017-18 - up from $119m in 2015-16, and a far cry from its origins in the Great Depression when farm worker, Reginald Murray Williams and a fellow stockman began making saddles and boots.

Williams eventually sold out in 1988 and the business began to be acquired in 1993 by friend and former News Corp Australia boss, Ken Cowley.

RM Williams' global brand appeal was verified in 2013 when the influential LVHM group's consumer-focused investment arm bought a 49.9 per cent stake from the Cowley family, expanding to 82pc a year later.

Potential new buyers are now being sought out for a likely auction later this year.

There is no certainty as we sit here today that the process will result in a sale, and no certainty about the identity of any buyer - Michael Waters, RM Williams

Confirming sale plans this week, RM Williams global commercial operations manager, Michael Waters, told commercial partners the process was likely to take a number of months, but it was "very much business as usual" for the RMW team.

"We are at a very early stage in this confidential process," he said.

"The process will not affect the day-to-day operations or leadership of RM Williams in any way." He also noted there was "no certainty as we sit here today that the process will result in a sale, and no certainty about the identity of any buyer".

"Importantly, the value in RMW, as we all know, comes from the strength and heritage of the brand, and from its people and artisanal manufacturing capability in Salisbury," Mr Waters said.

"Consumer demand for brands synonymous with quality, craftsmanship and sustainability mean the future for RMW is bright."

Fewer people today think the romantic side of Australia's harsh, dry landscape is as relevant to them, or their wardrobe, as it would have been 20 or 40 years ago - Angelo Pantalone, RMIT University

However, despite "very much reflecting the Australian way of life" and being part of our fashion landscape for decades, Mr Pantalone said brand had also been forced to evolve and work with the high value international fashion market, which did not appeal to some regional shoppers.

Its traditional domestic support base had drifted, especially as the company's practical, hard wearing work wear range was scaled back to accommodate a greater focus on leather goods and smart-casual or modern business wear.

"I don't think they (RM Williams) did anything particularly wrong," he said.

"Fewer people today think the romantic side of Australia's harsh, dry landscape is as relevant to them, or their wardrobe, as it would have been 20 or 40 years ago.

"RM Williams was at risk of becoming less relevant to its ageing consumer base, and to emerging younger consumers as work and social environments changed.

"To produce a big range of traditional outdoor wear would require a considerable production volume, and that probably wasn't selling as fast, so the brand was at risk of slowly losing some of its financial value."

At the same time big changes in the international fashion retail market in the past decade brought mid-range and upmarket disruption from overseas brands, while newer competitors sourcing lines overseas for the functional rural clothing market rose up to capture market share.

He said the deep authenticity of the RM Williams brand as part of Australia's bush heritage may well encourage a new owner to bolster its effort in more traditional garment categories.