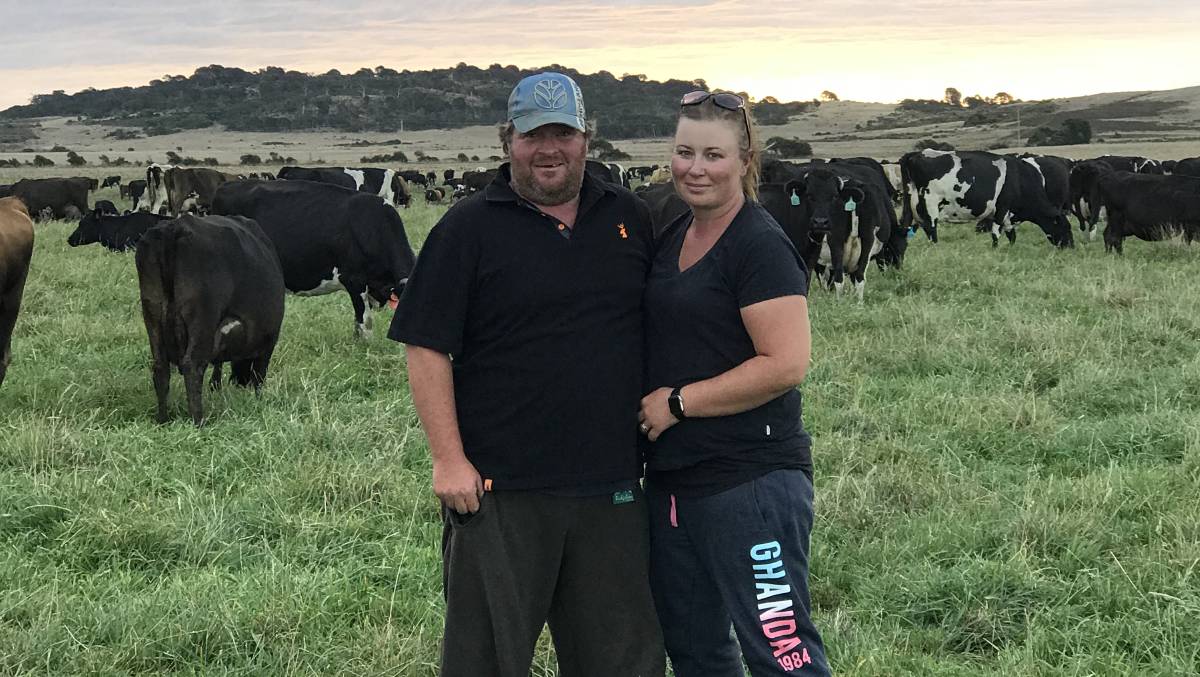 AWARD WINNERS: The 2019 Tasmanian share farmers of the year are Damien and Brooke Cocker.

2019 Tasmanian share farmers of the year Damien and Brooke Cocker focus on building a team to successfully manage their business.

There's no greater asset to a dairy business than a high performing team, says 2019 Tasmanian share farmers of the year Damien and Brooke Cocker. Mr Cocker said managing a team was all about applying and sharing knowledge with people and recognising their valuable contribution. They also have a 'leading by example' philosophy that underpins their management style.

The Cockers share farm in the far north east of Tasmania on Rushy Lagoon, one of Tasmania's largest dairy farms.

They operate two of the four dairy farms on a cents per kilogram of milk solids payment arrangement and have recently purchased their own dairy farm.

They have three daughters under the age of eight and juggle the demands of their family commitments with running their large share farming business.

"I just love dairy farming because you get to spend so much time with your family," Mr Cocker said. "The kids are at school now but I could spend breakfast, lunch and dinner with them when they were younger. I just love if for that family environment aspect."

Rushy Lagoon spans almost 21,000 hectares, including 14,000ha of grazing country, and milks 2500 dairy cows alongside all dairy young stock and 7000 beef cattle. The area receives an average rainfall of 750 millimetres per year and has developed 1000ha of irrigated area.

The Cockers employ five full-time employees and have a staff-cow ratio of 228 cows/FTE (full-time equivalent).

"If you are motivated and passionate about dairy farming as an employee you are half way there," Mr Cocker said.

"There are lots of positives for newcomers to dairy. There's Discussion Groups and Dairy Australia courses like Cups on Cups off. The way we look at it is we may lose some of these people from our business but it's about helping them build a career and how as employers we can help them to fulfil their potential over time in their roles."

Staff rosters are drawn up well in advance so that all staff can plan ahead. The Cockers run a seven-days-on three-off roster although in the past they were on a 10-days-on four-off roster. This change came out of feedback from the team.

"We discussed it as a group and the feedback was that the team can get a bit tired toward the end of the 10 days so we changed it," Mr Cocker said. "With three days, you can still have enough time off to do something meaningful and it means that we often have two people on the farm the whole time which is useful."

A team meeting is held when important issues need to be raised such as dealing with high cell counts or identifying cycling cows.

Mr Cocker said having time off was also important and encouraged, outside of any busy times such as AI and calving periods.

In providing a great workplace for his talented workforce, Mr Cocker said he was conscious of leading by example. This means he's there with his staff on small jobs like replacing rubber liners in the dairy, while Mrs Cocker looks after the majority of the calves. When calving time arrives, Mr Cocker also looks after night calving so his team can focus on their core roles during the day.

Animal welfare issues, now critical to dairy operations, were also discussed with the team. "I guess for me, any animal welfare decisions are discussed with the team and the 'why' behind it," he said. "Tail docking is a good example, especially for some of the staff who have worked in the industry when tail docking was the norm. I make a point of explaining why we don't do it anymore and the reasoning behind it."

Mr Cocker said reflecting back to his formative years in dairy farming helped to improve both his own and his employees' performance. "I think as a manager having patience is important and remembering at one time, you were in that position of starting out," he said. "Some people take longer than others to learn but they will get there and it's a matter of supporting people and using your experience.

"If there are issues that crop up for example, sleeping in, you can usually find the answer if you ask the right questions. There is usually an underlying issue that can lead to these things and a simple solution can be found.

"Sometimes if you jump on it straight away you just get cranky. It's more constructive to sit back and think about it and talk about what might be done differently next time."